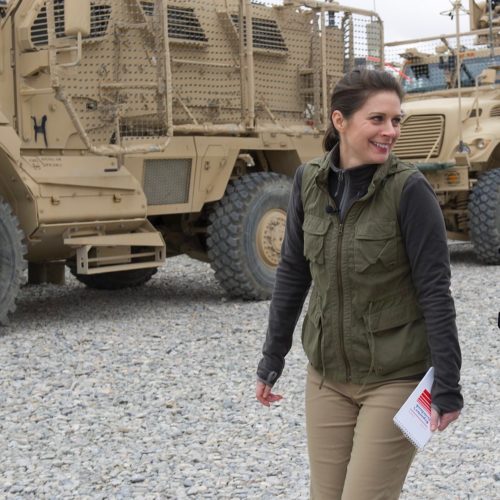 Don’t you just love it when news outlets like CNN and their “truth seeking journalists” try to play it slick on national television? “OutFront” host, Erin Burnett, is our latest example of stellar “journalism” on display.

In an interview last night with Arkansas governor, Asa Hutchinson (R), Burnett confronted the remarks he made at the 2016 Republican National Convention, where he slammed Hillary Clinton over her handling of classified information. Hutchinson was appearing on CNN (and Burnett’s segment) stating he called on the Department of Justice to explain why the FBI raided the Florida home of former President Donald Trump on Monday. Didn’t stop Ms. Burnett from throwing out a smug grin and this:

We do know from our reporting the search warrant itself as it was written was related to Trump’s handling of classified documents, and one source says the authorities suspected he withheld documents with national security implications. So on that front, governor, when we were searching, we found something that you had said back in 2016 and I wanted to play it now.”-Erin Burnett, OutFront CNN

Tape rolls and we hear Asa Hutchinson saying,”we don’t want a president who in the words of the FBI, is extremely careless in the handling of classified material.”

Governor, of course, that was about then Democratic presidential nominee Hillary Clinton. The FBI was investigating her for private email server as secretary of state. But obviously, your words then, I have to explain that because they would apply now. Do you hold former President Trump to the same standard?”-Erin Burnett, OutFront CNN

Gotcha, Hutchinson! But not quite…

Well, certainly anybody who is commander-in-chief, anybody who has that level of responsibility ought to handle classified information with great care and consistent with the law. Absolutely. Those are classified for a reason. But you also, as it points out, Hillary Clinton – then secretary of state – was not held accountable. That was dismissed, so that’s why a lot of the Republican base sees an inconsistency, sees a different handling of the same issues by the Department of Justice.”-Asa Hutchinson

I could just hear CNN, Erin Burnett and CNN’s entire viewer base of like 50 people all saying something to the effect of, “but Trump was the President, Hillary Clinton was NOT President-she was the Secretary of State!” Big difference, we know (snort). Home-brew server? BleachBit? She wiped it? Like with a cloth? I mean, really. There was nothing to see there. Just “a bunch of e-mails about yoga and Chelsea’s wedding”, right? Ahh, yes. Right. A lot of smoke and no fire.

We know. It comes as no surprise that anchors at liberal media outlets like CNN would use these tactics. We are not shocked. Especially, as it seems Ms. Burnett has been licking the boots of the Clintons for quite some time now. Take a look at this nugget from 2012:

I mean, I feel dirty for just watching this. People love Bill Clinton for his vices and hate him for his vices? Can you imagine someone like Burnett saying this about TRUMP? Was Burnett talking about The Clinton Foundation or Bill’s trips to Pedophile Island with Jeffrey Epstein? Which vices, exactly did people love? And then, she brings up the two women in his life? (Gag). What planet is this chick on? Burnett looks up at Bill Clinton with creepy, fawning adoration and laments how some people would be “jealous” of the amazing father/daughter time he was spending with Chelsea traveling for their (infamous) family foundation. Nothing to see? Just millions of dollars of donations from “kind strangers” who had no special access to the former Madame Secretary, right? A foundation, flush with cash from “kind strangers” that did not shell out $3 million dollars for Chelsea’s wedding? Hell, a $3 million-dollar wedding is worthy of some envy, right?

As the FBI raids Mar-a-Lago and Melania Trump’s closet (dear God, please send some of her dresses to our current First Lady), the liberal media cheers this on to the point of being joyously smug. They ask questions with $hit-eating grins just like CNN’s Erin Burnett with Asa Hutchinson. They love this and are taunting Republicans, shamelessly gloating, hoping to trip those on the opposition up and salivating at every, single opportunity to do so. These are the types of people we are dealing with in the cesspool of liberal media.

At this point, you may be asking, what difference, at this point, does it make? Oh, there are big differences. YUGE ones, I’d say. The Out Front antagonism and smugness in liberal media outlets like CNN is just one contrast to many if we harken back a few years. Until CNN strikes again.