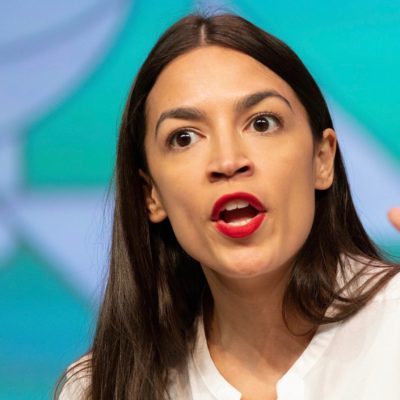 Just when one thinks Alexandria Ocasio-Cortez cannot exploit her lack of economic knowledge and her worthless college degree any more than she already has, think again. After defending Bernie Bros the other day, she took to twitter to throw billionaires under the bus last night:

In a time when ~60% of American workers make less than $40,000 a year, billionaires should not exist.

AOC elaborated by stating that billionaires don’t “work hard” for their money. And that they “don’t have a billion dollars because they work harder than teachers or single moms”. Why are they billionaires, AOC? Enlighten us…

They are billionaires because the stock market makes that money for them, which relies on profiteering off insulin, low wages, scrapped jobs, etc.”-Alexandria Ocasio-Cortez, Twitter

Oh, boy. Duck for the incoming:

The wing of the hospital I had to go to this past week was donated by a millionaire! What have you contributed? Millionaires and Billionaires also sponsor scholarships! Who sponsored yours? I bet he wants his money back!

Not, millionaires, silly Americans! AOC is talking billionaires. If she were talking millionaires, she would be referring to her old pal Bernie Sanders and some of her other friends who make up the party of crooks we all know as the Democrats. It’s okay for a millionaire politician who is a Democrat to amass wealth, you see, even if he has done so off the backs of Americans. This is perfectly acceptable in AOC’s world even though they don’t do much of anything but sit on their asses and blow smoke about helping the working class.

"AOC Would Like To Remind Everyone That She Works At Least Ten Times As Hard As American Ditch Diggers." pic.twitter.com/M5Z2Zov6jQ

And every ditch digger should also be able to afford a ten-dollar cup of coffee and a seven-dollar croissant at the airport, AOC. Moving right along…

Indeed, she did. The billionaires are getting in the way of all Americans (and illegal citizens, too) getting Medicare for All, A living Wage and Labor Rights, Public Colleges, Free College Tuition for useless degrees such as hers, fixing the pipes oil Flint, 100% renewable energy, not hurting immigrants and holding Wall Street accountable. Darn those billionaires! They threw a fat stack of cash at the NYSE and went out for steaks to watch their bundle of cash grow. Billionaires did not become billionaires by working hard, working smart, taking risks on investments and making calculated decisions with their marketing and money. They just-poof-amassed this wealth and are making it harder for others to make their “fair share”.

We’re in times of “economic desperation”. And because of this, billionaires are at fault. Everyone needs a “fair share”, they say. Or if not “fair share”, more money for AOC and her slovenly colleagues of like-minds to roll around in because the working class, who they claim to champion, will never see this. I do not care how great this may sound to some. Americans will never see a dime from them but instead will be taxed into oblivion in the name of seeing “programs”. I only wish I could explain this to some dear members of my family who are retirees whom I love dearly but are drinking the Kool-Aid. I only wish I could explain this to young, “oh-my-God-Europe-is-so-much-better”-types because they are not going to see it either. Those who sit on their asses might see something and those who sit on their asses are the same ones who think they are entitled to other people’s money and benefits. We have enough people milking the system of free medical leave based on “conditions” in our economy now. Not everybody…but there are a token few. We don’t need anymore. And those people will continue to sit on their asses when socialist “living wages” come their way.

Nothing will come out of AOC’s pocket, though. She’s got to shop at Whole Foods weekly. But she’ll gladly take it from the billionaires of the country because a single mom, a teacher, a ditch digger works that much harder. In all honesty, you cannot compare a single mom, a teacher, a ditch digger to a billionaire. But, single moms, teachers and ditch diggers alike are indeed free to invest in the stock market in this great country of ours. How does one create more jobs without business enterprise with billionaires of these enterprises at the helm? And who does the state take the wealth away from? White billionaires? Black billionaires? Men? Women, too? Billionaires are at fault. Billionaires are the reason for metropolitan areas run largely by Democrats being in squalor? This has nothing to do with laws and policies and budget cuts pushed forward by Democrats? Nope. Corporate billionaires create housing crises in large cities. (Damn you, Jeff Bezos.) And what I want to know is…how is the brainiac we know of as AOC going to take out the billionaires and “redistribute” their wealth, exactly? Kill ’em? Put them in reeducation camps? In truth, the kids running a lemonade stand on this sunny day in the Pacific Northwest have a better grasp on economics than Notorious AOC.