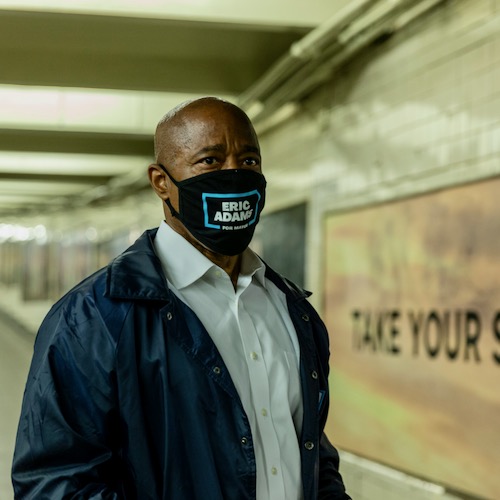 Eric Adams wanted to be front and center regarding the vicious subway attack, but that darned covid diagnosis got in the way. This was quite the sympathetic headline.

Oh that’s just too damned bad. Never mind the victims in this attack, they are mentioned just ONCE in that article.

Almost two months later, Adams finds himself responding to a horrific shooting in a Brooklyn subway station that injured at least 16 people during the morning rush — all while the mayor is quarantined with Covid-19.

That’s just fabulous. The report I linked to spent 99.9% of the time propping Eric Adams up while completely ignoring the current and past victims of subway attacks on his watch. Furthermore, the very next line in the article was quite astounding. It seems that good ole Eric has earned a national reputation as a “tough on crime Democrat.”

I’ll admit, it took me a significant amount of time to stop laughing and look for my eyeballs they rolled so hard!

If Eric Adams was tough on crime, then the cameras along ALL of the subway lines were working, right??

Reports that the close-circuit cameras at the 36th Street station were not working. In this day and age, how does THAT happen???

Look, Adams had already promised additional police patrolling the subway and platforms. Now, today, he suddenly promised more police. However, additional safety comes with ensuring that ALL security cameras are working 24/7. If it turns out that none of the cameras were working, Adams has some questions to answer. As does, frankly, those running the subway and the NYPD.

The 1,000 cops added to subway by Eric Adams didn’t stop this, then an NYPD captain made the decision not to stop trains and let the shooter escape, and now the police can’t find him. Before you call for more cops, ask yourself if they did a single thing to keep us safe today.

As for many of the subway attackers leading up to yesterday morning, how many are in jail and how many are either let loose or are out on bail? Too many.

Sources tell us #brooklyn attack is being treated as terrorism, and the suspect is described as a 5’5 black male wearing a grey hoodie and MTA vest. https://t.co/9jTnp7xtG4

Meanwhile, as the hunt for the shooter continues, the Mayor’s security detail has been increased.

“There are some postings possibly connected to our person of interest where he mentions homelessness, he mentioned New York, and he does mention Mayor Adams, and as a result of that abundance of caution, we’re are going to heighten his security detail,” Police Commissioner Keechant Sewell said at a press conference Tuesday evening.

I can tell you this, it’s probably easier to increase the Mayor’s security detail than it is to make arrangements among the precincts to staff up the subway system without leaving gaps in public safety elsewhere!

Eric Adams promised in January that the subway system would have a larger police presence. He promised more platform barriers at the station, and to deploy law enforcement combined with homeless outreach to deal with those issues as well.

Here’s the problem with getting all of this done. It really seems that nothing has changed.

Tuesday’s shooting came amid a rise in violent crime across New York City, and fears from some pandemic-weary New Yorkers to return to the subway system. Last week, the city’s police commissioner released new figures showing a 36 percent increase in major crimes and a 16 percent rise in shootings over the past year.

Furthermore, a recent survey by the Metropolitan Transportation Authority (MTA) found that 90 percent of New Yorkers who stopped riding the subway said that fear of crime and harassment was the main reason they left the transit system, according to The New York Times.

Now, as we go into the next morning after a vicious attack on a major portion of NYC’s subway system, all we have is the Mayor making more promises, while New Yorkers wonder when the next subway crime will be committed.

I get that it takes some time to ramp up police and security, IF there was absolutely nothing in place prior to January when Adams took office. However, even as he made promises, he also whined that the magical federal dollars would solve everything

He said his administration has launched several initiatives to bring crime down, but that the problem was systemic and also required federal action.

There you go. There’s the money quote. More federal dollars would’ve stopped this shooter, Adams is certain of that.

Ending gun violence means changing gun laws. We cannot clean up a flood when water is still pouring into the basement.

We cannot stop until the peace we deserve becomes the reality we experience. pic.twitter.com/EhVXlFcHiQ

The hunt continues for the shooter, who likely didn’t buy his weapon legally, while those shot and injured work hard to recover. What is Eric Adams doing? Pulling a Joe Biden:

“If I was not quarantining in Gracie Mansion … I would be on that subway system,” Adams said in another local TV interview with News 12.

Cheers to you brave Sir Eric! May I interest you in some shrubbery, a participation trophy, and a reality check?