Next post
Russian Cruiser Moskva Blows Up in Black Sea 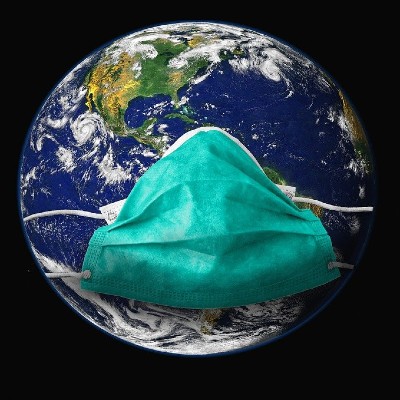 Insert ALL the jokes about how the last two years have been the longest two weeks EVER.

The CDC, which announced an “evaluation” of themselves by self-appointed “senior officials,” seems to realize on one hand just how badly they have screwed up and lost the institutional trust of the American public, and yet on the other hand, they just can’t let goooooo of the power they still do have.

Today’s news is definitely falling into the latter category.

The Biden administration announced Wednesday that it is extending the nationwide mask requirement for public transit for 15 days as it monitors an uptick in COVID-19 cases.”

The Centers for Disease Control and Prevention said it was extending the order, which was set to expire on April 18, until May 3 to allow more time to study the BA.2 omicron subvariant that is now responsible for the vast majority of cases in the U.S.”

“In order to assess the potential impact the rise of cases has on severe disease, including hospitalizations and deaths, and health care system capacity, the CDC order will remain in place at this time,” the agency said in a statement.”

Just 15 more days, everyone! JUST. FIFTEEN. MORE. DAYS. Does NO ONE at the CDC listen to themselves, or have any self-awareness at all???

Self-awareness? The CDC? What a joke.

We’ve seen this play before. “Two weeks to slow the spread.”

Enough with the mandates! https://t.co/ppDZLvpyMz

Of course, this was not the news that the airlines themselves wanted. In the midst of all of this, the wishes of the airlines have been largely disregarded, even though the brunt of enforcement – and the power trips by employees and the bad press that follows – is borne nearly completely by them. Lost in this argument has been the special needs community, where young kids with autism and other developmental disorders have been pre-emptively booted from flights because the airline crew doesn’t want to have to deal with exceptions to the rule, no matter if there is a medical exemption process. In late March, the airlines themselves pleaded with the Biden administration to bring an end to the mask mandate.

“It makes no sense that people are still required to wear masks on airplanes, yet are allowed to congregate in crowded restaurants, schools and at sporting events without masks, despite none of these venues having the protective air filtration system that aircraft do,” the letter said.”

“Now is the time for the Administration to sunset federal transportation travel restrictions — including the international predeparture testing requirement and the federal mask mandate — that are no longer aligned with the realities of the current epidemiological environment,” the letter continued.”

The CEOs went on to argue that enforcing the mask mandates has taken a toll on their employees, who have experienced an increase in unruly customers due to masking-related conflicts.”

This brings us back to the ongoing problem that the Biden administration, Democrats, and the media are having with COVID-19. Team Biden would love to keep COVID-19 in their back pocket like a “get out of jail free” card (funny, that) to excuse whatever policy they come up with next. But they know they have to ease restrictions, because the poll numbers were just SO bad. It wasn’t “science,” it was political science that saw the loosening or ending of regulations.

The Biden administration and the CDC can’t have it both ways. We can’t have the head of the CDC and self-appointed “science” guys like Anthony Fauci telling people to make their own risk assessments, and the White House brushing off COVID-19 exposures because “the CDC says it wasn’t a close contact,” and then have the administration and CDC say “just 15 more days because of this Omicron variant bump.”

And the CDC wonders why they’ve lost the trust of the American people. Think that self-evaluation is going to point this glaring example out?