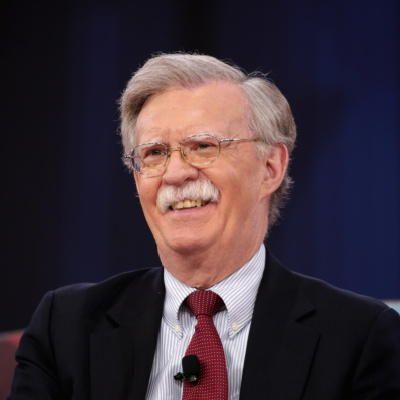 On NBC’s Meet the Press on Sunday, John Bolton said that he may enter the 2024 Presidential Race to stand up for The Constitution in reaction to former President Donald Trump. Trump asserted last week that the massive fraud in the 2020 Presidential election allowed for the termination of rules and regulations, even those in The Constitution. Bolton says it’s not enough to support The Constitution. We need people who will oppose those who undercut it. The question is do we NEED John Bolton. Stop laughing.

We can argue over whether or not Trump called for the termination of our founding document OR just the rules and regulations regarding our elections, which were ignored in 2020 anyway. But, the statement was absolutely inarticulate. We need an articulate President. One that is not suffering some form of dementia. One that doesn’t go off the cuff. And, preferably one under 70 years of age. I do not worship youth, and young Presidents (Barack Obama/JFK) don’t have great track records. John Bolton is 74 years of age. If he were 69 or even 70, he might be in that Presidential sweet spot. Not too young. Not too old.

John Bolton received his undergraduate and law degrees from Yale. I think we have received enough of the bounty of wisdom from Yale (5 Presidents) and Harvard (8 Presidents). For your situational awareness, Ron DeSantis went to both schools. I would not be opposed to a Presidential candidate who went to the local JuCo, but has solid business experience. Time to spread the wealth around and let other institutions shine.

Speaking of solid business experience, John Bolton has none. Unless he waited tables at IHOP in high school, Bolton has worked in government and think tanks. He was in the Army National Guard and Reserves during Vietnam. Bolton was a proponent of the War. He did not serve in the war. From Wikipedia, here are Bolton’s recollections of his Vietnam stance:

He wrote in his Yale 25th reunion book: “I confess I had no desire to die in a Southeast Asian rice paddy. I considered the war in Vietnam already lost.”[34] In a 2007 interview, Bolton explained his comment in the reunion book saying his decision to avoid service in Vietnam was because “by the time I was about to graduate in 1970, it was clear to me that opponents of the Vietnam War had made it certain we could not prevail, and that I had no great interest in going there to have Teddy Kennedy give it back to the people I might die to take it away from.”[33][40] In his 2007 book, Surrender Is Not an Option, Bolton described his perception of the war as a “futile struggle”, and that “dying for your country was one thing, but dying to gain territory that antiwar forces in Congress would simply return to the enemy seemed ludicrous to me. Looking back, I am not terribly proud of this calculation…

Speaking of war, John Bolton is all for it, as long as it doesn’t involve him. In 2019, Daniel McAdams wrote:

President George W. Bush’s vice president, Dick Cheney, is widely seen as the “real” president when it came to implementing an aggressive, neocon-approved foreign policy. Bush was seen as incurious putty in Cheney’s hands. Has Trump’s National Security Advisor John Bolton taken on that role in this Administration? Is Bolton the new Cheney?

John Bolton didn’t last long enough as President Trump’s National Security Advisor. Trump wasn’t eager to go to war and stopped listening to John Bolton. CNN worried at the time that Bolton was a “stabilizing” force on Trump. What no new wars?

For a time the now ex-national security adviser, who first caught Trump’s eye with his tough talk on Fox News, was useful to the President – sharing his desire to shake up the globe.

But like everyone else in Trump’s dysfunctional foreign policy team, Bolton wore out his welcome, standing in the way of his boss’ impetuous instincts and seeking a share of the spotlight.

Only in the bizarre Trump orbit could the exit of a national security adviser seen as an ideologue and aggressive hawk also be perceived in some ways as the removal of a stabilizing force. But he did have a view of American interests and the use of US power that while hardline was predictable and logical and positioned within the historic boundaries of US diplomacy.

Bolton wrote a tell-all book, released June, 2020, “The Room Where It Happened”. I cannot forgive Bolton for the excrement in the book. Bolton never misses a chance to dog Trump:

Bolton is old, never had a real job, is a war hawk and loose lips. Importantly, he has no constituency. Who would vote for him?

Joe Kent is a veteran and Gold Star husband. He knows John Bolton was hand in glove with Dick Cheney. Mr. Kent recalls Dick Cheney saying that we “would be greeted as liberators” with this tweet mocking Bolton’s run for President.

Go for it John, you’ll be “greeted as a liberator.” https://t.co/b5xXKUJcmx