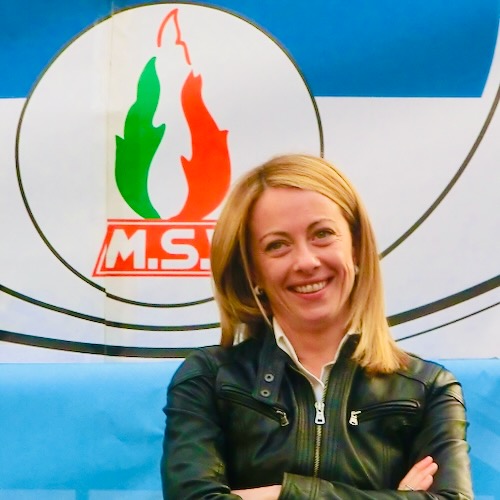 The U.S. media has gone all in to label Italy’s Giorgia Meloni an ultra right-wing conservative with fascist ties. I can only suppose that our journalistic betters are doing such because of speeches like this that she’s made during her campaign.

Earlier this year she outlined her priorities in a raucous speech to Spain’s far-right Vox party: “Yes to the natural family, no to the LGBT lobby, yes to sexual identity, no to gender ideology… no to Islamist violence, yes to secure borders, no to mass migration… no to big international finance… no to the bureaucrats of Brussels!”

Well now, those ideas aren’t unreasonable. The problem is, according to the woke agendas the media and the left are pushing, those ideas are wrong speak and wrong think. Therefore, Giorgia Meloni must be vilified and castigated. Cue Politico:

But her rise has led to soul-searching among some on the left in Italy who see Meloni’s political tribe as the descendants of Mussolini’s fascists. Brothers of Italy traces its origins to the Italian Social Movement (MSI), which was founded by ex-fascists after WWII. Hardline positions on immigration and drugs combined with her disapproval of abortion and a staunch euro-skepticism to reinforce the picture.

Wait, she’s wrong for expressing disapproval for abortion on demand? She doesn’t want unchecked mass migration and understands that no limits on drugs will lead to more crime in Italy? There she goes again, speaking out of turn!

Yes, CBS absolutely went there with dropping that F-bomb. Then again, the media is falling all over themselves to adhere to the party line that is put forth by the EU. Meloni is now painted as being in the same camp as Hungary’s Victor Orban who himself has stood firm against open borders, been successful on crime fighting, and won’t let woke leftist policies destroy his country.

The EU is so ticked that Italy, a founding member of the European Union, might elect someone who pushes back against EU overreach, that Ursula von der Leyen issued a veiled threat against Italy last Friday.

“My approach is that whatever democratic government is willing to work with us, we’re working together,” von der Leyen said at Princeton University in the United States on Thursday, responding to a question on whether there were any concerns with regard to the upcoming elections in Italy.

“If things go in a difficult direction, I’ve spoken about Hungary and Poland, we have tools,” she added.

Matteo Salvini, the head of the League and a part of Meloni’s conservative alliance, denounced her comments as “shameful arrogance”.

“What is this, a threat?” he wrote on Twitter. “Respect the free, democratic and sovereign vote of the Italian people!”

If the vote turnout is any indication, there’s a growing disdain for the EU shoving French and German policies down everyone’s throat. Said policies are now leaving many EU countries facing rampant inflation, food shortages, a major energy crunch, and major increases in crime.

Is it any wonder that many of the Italian voters are looking to someone who will listen to THEM instead of the EU bureaucrats?

I’ll admit, the Italian election for premier was something I hadn’t really noticed until CBS started labeling her a fascist and the rest of the media started following suit. Then, I started researching. As I’ve noted above, because she is pushing back twice as hard at the woke politics of soft-on-crime, war on families, gender ideology crap and more, she must be the wrong kind of person for the job. She’s very right-wing according to the media, who has bought Democracy Now’s schtick hook, line, and sinker.

"She has also called abortion a 'tragedy,' raising fears for the future of women’s rights in the country."

Want a few more examples? You can find them here and here.

I see global liberaldom is approaching this with the usual sobriety and non-hysteria. pic.twitter.com/fEsTOHbJE0

What the media is doing is overtly implying that Meloni will be the new Mussolini. Except that Mussolini was, in reality, a far left Socialist. One whom the left of the 1930’s and ’40’s here in the U.S. absolutely adored until Mussolini’s hard core leftist policies could no longer be ignored.

Hollywood produced a worshipful film celebrating his rise. Columbia University created a department studying Italian fascism. Over 3 years, the NYT and other publications treated Mussolini to more than 100 glowing profiles (by contrast, Stalin received only 15).

But now, left is right and right is left according to our media betters here in the U.S. and around the world. Giorgia Meloni’s policies advocating for families, stopping mass immigration, combating inflation, and saying no to economy killing climate change policies mean she belongs to the wrong party and is on the wrong side of history.

Why does the left and the U.S. media hate her? Watch this entire speech and you’ll quickly figure it out.

Watch this as well.

I’ve never heard any politician so perfectly explain what we’re up against and why we fight.

When you watch this video, you’ll quickly realize why the establishment is afraid of her.
pic.twitter.com/CswR8o3mjg

Giorgia Meloni is likely to be Italy’s next Prime Minister. The left hates her policies and is doing everything they can to paint her with the brush of fascism. She’s definitely going to be someone to watch in the coming months and years. Meloni quoted G.K. Chesterton in her speech just above.

For all those in the media and on the left who are demanding she stop the wrong speak and wrong think, here’s another one for you.