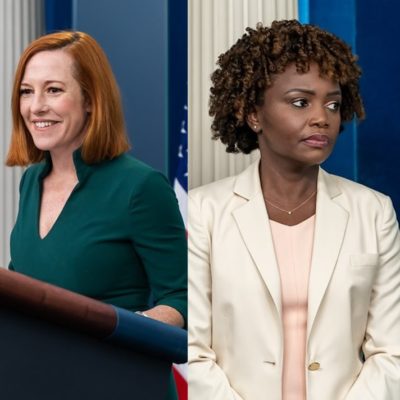 Jen Psaki, now getting paid the big money by NBC, is a little more free to speak some hard truths without putting happy spin on them. However, she just made life a little harder for her less-talented successor, Karine Jean-Pierre.

Believe it or not, the November midterms are SIX WEEKS AWAY. This seems unbelieveable, especially after the last two years of just watching the decline of both the country and of Joe Biden, and thinking the midterms would never come. But here we are, and Democrats should be concerned. After being so certain that abortion was going to be their ticket to victory, the polls are not looking good for the left. And not just that, but Democrats have had enough and are ready to ditch Joe Biden.

With his party struggling in the midterms, his economic stewardship under fire and his overall job approval under 40%, a clear majority of Democrats in the latest @ABC News/WaPo poll say the party should replace Joe Biden as its nominee in 2024. https://t.co/in5maRHria pic.twitter.com/ZSF1JJBoiX

And Jen Psaki is aware that this “ditch Biden” mentality now held by a majority of Democrat spells doom in the midterms if Biden is the focus.

Wow. Amazing how not being paid by the White House suddenly made a more honest woman out of Jen Psaki. Not that the woman still isn’t a bought-and-paid for Democrat hack who will happily step back through the revolving door between media and politics when next it suits her ambition and her wallet. But it’s amusing to see her now admitting that Biden’s numbers are bad enough that if the midterms are all about him, Democrats lose. And also admitting that crime is a huge problem for the Democrats, which is a direct contradiction to Psaki’s earlier attempts, while she was press secretary, to blame Republicans for “defunding the police.”

This put Karine Jean-Pierre, the current White House press secretary, in the hot seat. It’s one thing to have to respond to a commentator’s take on the midterms. It’s another thing to have Peter Doocy bring up Jen Psaki and her comments to your face during the daily White House briefing.

PETER DOOCY: "Does Biden think America's big cities are safe? … Should everyday Americans who are not in the public eye feel safe?"

Jean-Pierre responds by bragging about President Biden funding law enforcement, despite members of his party calling for the defunding of police. pic.twitter.com/5uwgAcGYpP

PETER DOOCY: "Jen Psaki says that crime is a huge vulnerability for Democrats. Why would she say that?"

I’ll give Jen Psaki this much – she was a much more creative liar and spin machine than Karine Jean-Pierre. Psaki was able think fast and lie with a fixed grin on her face. Jean-Pierre immediately flips pages in her binder to consult her notes, and even then her spin is hesitant and stilted. She simply doesn’t have the same gift of bullshit that Psaki had, which in the job of Biden White House press secretary, is a huge liability.

And there really is no good way for Jean-Pierre to answer the crime question. Democrats are hamstrung by their entire “defund the police” millstone that is still hanging around their necks, no matter how many times Biden himself declares that “funding” the police is the only response. The hard left is still insisting on their slogan and refusing to back down, and Democrat prosecutors have consistently let bad guys out on no bail to commit new crimes, and are nowhere to be found when the consequences result in death. Vulnerable Democrats know that crime and inflation are the topics that voters are concerned about, because they are the issues that hit them closest to home – which means that these are the issues that are more likely to drive votes. Yes, there are single issue voters who will rally around abortion, but relying on the repeal of Roe v. Wade to bail out the Democrats nationally is foolhardy wishcasting.