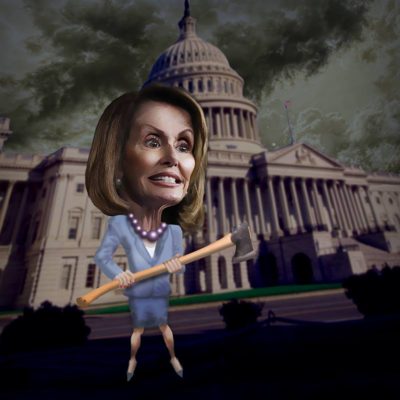 There is nothing but crap in the Pelosi Schumer bill that Democrats oh-so condescendingly inform Americans is MUCH better than the Republican CARES Act.

Remember, as I noted this morning, Democrats decided to once again chose politics over the needs of Americans right now. As the day has progressed, what I have seen is sheer arrogance from the Democrats.

You know what Chuck? It is YOU who is playing partisan! You and Nancy Pelosi and all the other mealy-mouthed Democrats are the problem. Why? Because you’d rather stuff a bill with a semi-truck load of crap instead of putting forth a clean bill on that DIRECTLY addresses the problems this entire country is facing right now.

“Democrats blocked a $2 trillion coronavirus rescue bill for the second day in a row Monday, as near-pandemonium erupted on the Senate floor with lawmakers venting fury about their failed efforts to address the pandemic’s impact on the U.S. economy.

Ahead of the vote, Senators clashed angrily over delays that had bogged down the giant bill, reflecting uncertainty about whether Congress would be able to reach a deal in the coming hours. Some lawmakers had hoped to reach an agreement three days ago, but talks kept breaking down even as they negotiated throughout the weekend.

Democrats have argued that the bill is disproportionately tilted towards helping companies and needs to extend more benefits to families and health care providers, while Republicans have countered that the bill offers unprecedented financial assistance to the entire economy and needs to be passed before more people lose their jobs.”

Chuck Schumer was more of an asshole today than he’d ever been.

“The Democratic leader objected to my even being able to speak this morning? Is that what we’ve come to?”

You know what was in the CARES Act in addition to what I mentioned in the post earlier in the day? Businesses with employees of 500 or fewer people were going to be able to submit paperwork that would have given them the ability to receive TWO MONTHS worth of funds to pay their employees. TWO MONTHS can mean a great deal for any business.

But NOOOOO… the damned Democrats are blathering fake news about corporate bailouts and Trump benefitting. The lemmings on social media are buying into it that crap hook line and sinker. The Democrats want “transparency” as to which companies would receive funds. No, they don’t want transparency. They want to cherry pick who gets funds and who doesn’t. You can damn well bet that any Trump property is not on their list. I mean seriously, if you had the audacity to work for a Trump property to you know, make a freaking living!, too bad for you says the Democrats!

Well, since the Democrats are so concerned about their own bill, which is 1,400 pages long by the way, let’s take a look at what is in it shall we? Read this thread for details.

No, the US Postal Service doesn’t need a bailout right now, NOAA, the IRS, Galludet University and JFK Performing Arts shouldn’t be on the list either! American people need assistance and Democrats are playing bullshit games.

-A bail out on all current debt at the Postal Service

-Full offset of airline emissions by 2025

-Publication and reporting of greenhouse gas statistics for individual flights

The provisions will apply to the companies and business rescued by bill.”

NONE of the above list is has any bearing on what Americans need right now.

Senator John Barrasso (R-WY) lit into the Democrats on this.

Senator Barrasso took the Democrats to the woodshed on this, as did Senator Ted Cruz. EVERY single one of those pet provisions can be dealt with another time. Or never in my opinion.

Auto dealerships in the Denver area have now cut employee hours by half or have let nearly 75% of their employees go. Thousands of other businesses are shut down or hanging by a thread. And what do the Democrats do? Play games.

Do you want to know what ELSE was in the Republican bill that the Democrats drove a flaming spike through?

Here is what @SenSchumer and @SpeakerPelosi are blocking:

Are you angry yet? I am. And the media, New York Times in the lead, is providing cover for all this game playing horse shit.

There was a bill ready. The vote would’ve sent it to debate. The debate and votes could’ve dealt with some of the issues within the bill. Instead the Pelosi Schumer team is trying to ram a bill through that has miscellaneous crap in it that has NO bearing on today’s reality.

What the Democrats have done today is beyond disgusting, it is as Rep. Dan Crenshaw says, malevolent. I find them beyond contempt. You want more Trump and people leaving the Democrat party in droves? This is how you do it.