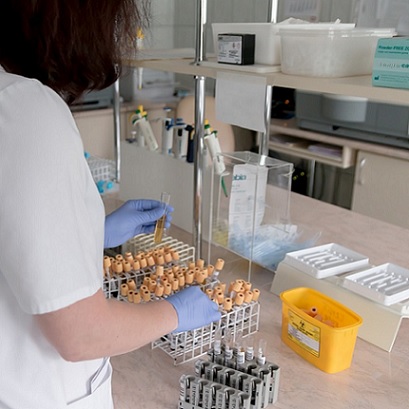 Nearly every single elected official has made testing for COVID-19 the cornerstone of how we dig ourselves out of this moment. Governors have said it, the medical advisors have said it, President Trump has said it. So, where are the tests?

During the Sunday evening press conference at the White House, President Trump noted that the United States has now run more tests than many countries in total.

Speaking at the daily White House coronavirus briefing, the president unboxed a swab testing kit and touted the new testing technologies that could fight the pandemic, even as he cautioned that some states “don’t know where they are.”

And here the president hits the nail on the head. While he and the COVID-19 task force have offered up the federal guidelines on what it will take to reopen the country in stages, and most state governors seem to agree with the staged approach, each state is still trying to ramp up testing. And now that the president has told the states that they need to decide for themselves how to open back up, governors are now demanding tests – both for the virus and for antibodies – from the federal government in order to make that happen.

“Testing is a local thing,” Trump said at a White House briefing. He said that too many governors were relying on state government labs and should turn to commercial labs to help them process more tests. He didn’t name any particular states or officials.”

But earlier Sunday, Republican and Democratic governors were unanimous in putting the onus on the federal government to help secure vital testing components, including swabs and reagents, the chemical solutions required to run the tests, which the governors said have been in short supply.”

“To try to push this off to say that the governors have plenty of testing, and they should just get to work on testing, somehow we aren’t doing our job, is just absolutely false,” Republican Gov. Larry Hogan of Maryland told CNN’s “State of the Union.” “Every governor in America has been pushing and fighting and clawing to get more tests, not only from the federal government, but from every private lab in America and from all across the world.”

The White House wants to strategically focus tests into “hot spot” areas in order for states to determine where they are, as Dr. Deborah Birx described to “Face The Nation” on Sunday.

Governors seem to just want all the tests, now (kind of how they wanted all the ventilators and were insisting that they needed them, and now it seems that the need is met without the supply being inflated to the levels that the governors demanded), because it does seem that the governors of certain states are starting to pick up their ears and pay attention to the protests that are happening. The people at the state capitals who are protesting are complaining about the governors, not President Trump.

The real issue is that the tests are being rushed out, supplies are running short, and neither government or private labs can keep up with the demand.

As President Trump and many of his advisers focus more attention on the nation’s economic reopening, lower ranking officials are trying to sort out the testing puzzle and individual labs are vying for supplies in a fractured and exhausted marketplace.”

“It is a little bit insane. Everyone is running around trying to get as much as they can from every vendor,” said David Grenache, the lab director at TriCore Reference Laboratories in Albuquerque, N.M. “Laboratories are competing with each other to get needed resources,” he said, and often coming up short.”

The private sector hasn’t so far been able to deliver nearly enough tests to meet the huge demand in the U.S., more than six weeks after the Food and Drug Administration allowed private companies to manufacture test kits and put them to use without having to be approved.”

A signal White House effort to ramp up testing showcases the obstacles. Federal officials sought to distribute a new device by Abbott Laboratories around the country, but the push fell short when supplies proved scarce and the device’s reliability faced doubts, according to state officials and laboratory experts.”

This isn’t about simply using the Defense Production Act (Joe Biden’s favorite default for solving all things related to COVID-19) to order companies to make tests. If there is no raw material and companies are scrambling to find what they need to even produce a reliable test, then the waiting game will become even longer. And people’s patience will fray ever thinner as food lines get longer, small businesses are being forced to wait out a pathetic power play by Nancy Pelosi and the Democrats just so the Small Business Administration can get more cash, and local governments start punishing protestors.

If all sides want to make testing the key to opening back up, then those tests need to be present in large quantities and reliable. The American people can’t be expected to sit around and wait for the government to throw them a bone while Nancy Pelosi enjoys her high-end ice cream and celebrities tell people to “stay inside” from their mansions. If the tests can’t be produced and distributed in a timely fashion while governors contemplate extending “stay at home” orders, then the protests from this weekend might just be a preview of what is to come.