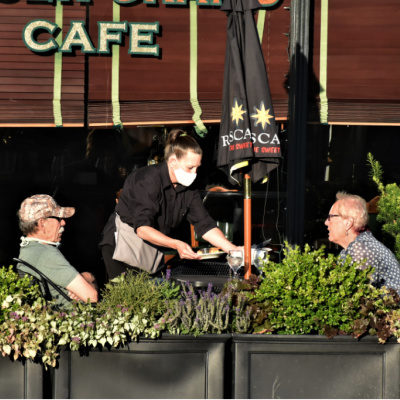 Next post
Mask Between Bites Latest Covidiocy In California 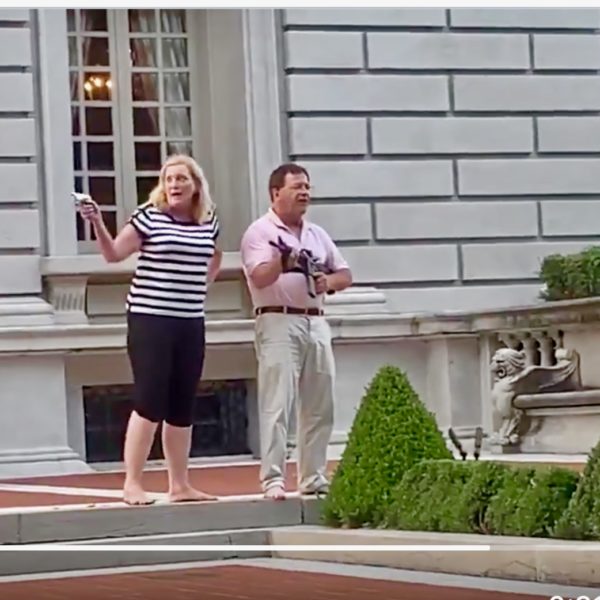 The McCloskeys were indicted by a St. Louis grand jury yesterday. For what you ask?

“A grand jury indicted Mark and Patricia McCloskey Tuesday on charges of exhibiting guns at protesters in a June incident in their neighborhood and added a charge of tampering with evidence for both members of the couple.”

Let’s talk a minute about that June incident. As Toni wrote here, the McCloskeys were peacefully dining on their patio  on a Sunday evening in June, when all hell broke loose.

A couple has come out of their house and is pointing guns at protesters in their neighborhood #StLouis #lydakrewson pic.twitter.com/ZJ8a553PAU

A little background on the area in question. Just outside the gates to Portland Place is Kingshighway Boulevard. Directly across and just to the south is Barnes Jewish and Washington University Hospitals. On that evening a large number of unruly protestors had gathered. They weren’t happy with Mayor Lyda Krewson and decided to once again go protest in front of her home.

Couple of problems with their decisions. 1. Mayor Krewson doesn’t live on Portland Place. 2. The protestors with their sticks, bats, bullhorns, and likely some with weapons had to open and tear down a CLOSED gate that explicitly states NO TRESPASSING PRIVATE PROPERTY.

So yes, those protestors, who had already had a history of getting violent, were indeed trespassing and the McCloskeys had every reason to be concerned and fearful for themselves.

We all know what happened next. They stood on their property, barefooted, and brandished two weapons. A rifle and a pistol.

Well, according to the protestors, the Democrats, and most of the media, defending your property while brandishing oh so super scary guns is BAD. And so, it was determined that the McCloskeys must be punished. Were the protestors punished? Nope, no charges were filed.

STL prosecutor Kim Gardner is engaged in a political prosecution

As AG I’m entering the case seeking a dismissal & defend all Missourians’ right to protect their lives/property pic.twitter.com/kQLXOAhFIz

Attorney General Eric Schmitt then added this during a follow up interview.

““It doesn’t happen every day,” Attorney General Eric Schmitt told the Post-Dispatch in an interview in the Capitol.

But, he said his controversial decision to seek to have gun charges against Mark and Patricia McCloskey dismissed is rooted in the state’s long-held interest in the right to bear arms.

“There is a common law interest if the attorney general feels that the broader interest of Missourians are affected, like the chilling effect that this might have with people exercising their Second Amendment rights,” Schmitt said.

“I felt it was appropriate that I weigh in,” Schmitt added. “We felt it was important to get it in and make the state’s position known early.””

That was in July. Now the McCloskeys have been indicted by a grand jury for EXHIBITING and TAMPERING.

Evidently standing on your own property holding a gun while a mob screams at you is felony exhibiting. You know, I think Circuit Attorney Kimberly Gardner really stretched to get this one and it will be very interesting to find out what is in the grand jury transcripts regarding said exhibiting charges.

It’s the second charge of tampering that had my jaw drop to the floor. Why? Two reasons.

A. The McCloskeys have had that pistol for a long time and specifically rendered it inoperable in order to utilize it as a prop for a court case of theirs. It has to be part of the record of those proceedings that the pistol is inoperable and why.

B. The tampering involved happened this summer per Kim Gardner’s orders.

“Assistant Circuit Attorney Chris Hinckley ordered crime lab staff members to field strip the handgun and found it had been assembled incorrectly. Specifically, the firing pin spring was put in front of the firing pin, which was backward, and made the gun incapable of firing, according to documents obtained by 5 On Your Side.
Firearms experts then put the gun back together in the correct order and test-fired it, finding that it worked, according to the documents.”

The gun was inoperable, and the crime lab was ordered to make it operable. Exactly who was doing the tampering??

Self defense is under attack in Biden’s America.
Reminder: The garbage STL city circuit atty Kim Gardner ordered the forensics lab to tamper with the evidence so as to get a felony charge on Patricia McCloskey. I explain here: https://t.co/iHuRpO9oHL https://t.co/HrEutjWmUW

Furthermore, Missouri’s Castle Doctrine comes into play here. Constitutional law professor Jonathan Turley has a good commentary on the case as well as the text of the Castle Doctrine here.

In response to the question about the crime lab making the pistol operable again in order to make their case, Mark’s response was “If that doesn’t frighten all of you. That the government’s willing to do that just to take political advantage to make this case, to intimidate people like us who would defend ourselves against the mob…”

He’s absolutely correct. We should be afraid. But more importantly we should be ANGRY that sitting government officials are willing to trample all over our Constitutional rights in order to further exploit their power for their own political purposes.

We won't be intimidated, we won't back down, and we will never abandon our 2nd Amendment rights!

The McCloskeys aren’t going to back down, and neither should we. Our 2nd Amendment rights, our Constitution, and our Republic are at stake right now and must be protected at all costs.