Previous post
Can We Trade Our Anarchists for Joshua Wong?

Couple Protects Their Home, Cause Controversy

Couple Protects Their Home, Cause Controversy 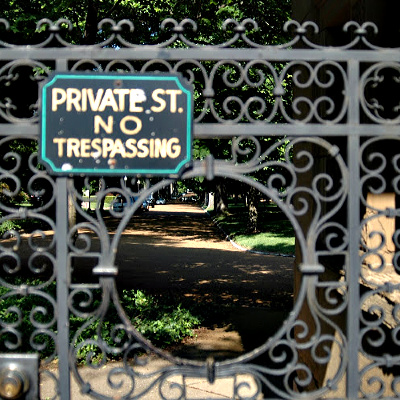 A St. Louis couple heard a ruckus outside of their home. They live in a private, gated community. Since they don’t often hear a ruckus outside their homes, they grabbed weapons and confronted the mob. The videos of this confrontation have incited controversy and some hysterically funny memes.

First things first, the couple, Mark and Patricia McCloskey are personal injury lawyers, and I have a deep and abiding dislike in my heart for ambulance chasers. Remember John Edwards? Yeah. I don’t like’em.

The McCloskey’s live in Portland Place, in the Central West End of St. Louis, Missouri. Also residing in that tony neighborhood is the Mayor of St. Louis, Lyda Krewson. Mrs. Krewson read the names and addresses of some of the “Defund the Police” proponents during a Covid-19 update, and a state representative complained about “doxxing”.

Hey @LydaKrewson. So not cool to doxx my constituents who support #DefundThePolice on your FB live today.

The “peaceful” protesters decided to go to the Mayor’s house and apprise her of their dissatisfaction were her methods. Only one teensy, little problem. The Mayor lives in a private, gated community. These streets are not public streets. According to reports, there had been about 500 protesters downtown who decided head over and have a nice chat with Mayor Krewson. The McCloskey’s saw at least 100 protesters come into Portland Place. No one can say for sure.

Every video that I have watched has shown the protesters opening the gate and walking through. Later pictures show the left side of the gate broken in half. Since I truly doubt that the Portland Place trustee broke their own gate and then later had to chain it up, I am going to guess the first few protesters walked through and some cretin in the crowd broke it for kicks and giggles.

The protesters can be heard yelling, “Whose streets? Our streets.” I gotta say, “Don’t be a fool. Stay in school.” This mob was on private property. When you watch the videos, it looks like the couple already had their weapons out. But, videos can be deceiving. Read this piece from St. Louis Today:

City police said the couple had called for help once they saw the large crowd enter Portland Place. The McCloskeys had been at home and heard a loud commotion coming from the street; they went to investigate and saw “a large group of subjects forcefully break an iron gate marked with ‘No Trespassing’ and ‘Private Street’ signs,” police said.

I am sure the police were eager for the opportunity to defuse this situation. Rasheen Aldredge of “Expect Us” admits that the group of protesters broke the law:

Rasheen Aldridge helped lead the protest, which was organized by a group called “Expect Us.” He said protesters were peaceful and no threats were ever made.

When asked why the group marched on private property, Aldridge said, “Just like in many disobedient protests, even in the ’60s, you break laws, make people feel uncomfortable. We’re not doing anything where we’re hurting anyone or putting anyone in danger.”

Except, Mr. Aldridge, you were on private property. Private streets. Private community.

Remember Breonna Taylor, who was shot in her bed during a no-knock raid? The police opened fire because her fiance shot at them. In her home, her fiance had every right to protect his home and beloved. Same here. Your castle. Your right to defend it.

In this video, Mr. McCloskey describes having to board up his downtown office and the threats he has been getting:

And, here is the real kicker. This couple supports Black Lives Matter, and seem to be typical white, woke liberals. Their lawyer, Albert Watkins, released the following gratuitously woke statement:

My clients, as melanin-deficient human beings, are completely respectful of the message Black Lives Matter needs to get out, especially to whites … (but) two individuals exhibited such force and violence destroying a century-plus old wrought iron gate, ripping and twisting the wrought iron that was connected to a rock foundation, and then proceeded to charge at and toward and speak threateningly to Mr. and Mrs. McCloskey.

I will give you a minute while you pick your jaw up off of the floor. The local district attorney is investigating and wants to find a way to prosecute the couple.

I will grant you that the McCloskey’s look like idiots, and Mrs. McCloskey looks like she doesn’t know which end of the gun makes the pew. But, be honest, what would you do?

The really fun part is the memes. You can see a list here. I think you will get a kick out of them.