Previous post
Somewhere Over The Rainbow: The Real Threat Looming Over The White House Colors

Next post
#SCOTUScare: Congressman Wants to Serve SCOTUS a Helping of Obamacare

This morning, millions of Christian Americans will attend church services. Many will be confused and upset at the Supreme Court’s redefinition of marriage, and many will be concerned not only about their nation, but about their churches as well.

If some of those Christians had visited internet social sites over the weekend, they would’ve been even more dismayed at the vitriol launched at them by the victors in the gay marriage case.

christians don't seem to get that love isn't gender specific, I don't give a fuck what your wack ass centuries old book says

Hey, do you not understand that America isn't a fucking theocracy? We're not all Christians. Go FUCK YOURSELF. https://t.co/uBiAEvmbfq

Christians have too many opinions. Just shut the fuck up and feed the poor.

They may have seen disturbing images, such as these gay activists in Toronto mocking a man wearing an “Ask Me About Jesus” t-shirt. . .

. . .which seems hauntingly similar to this photo from decades ago.

And even an Iraqi war veteran and amputee was mocked for his concerns about religious freedom. 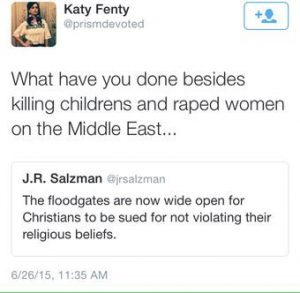 So how have religious groups responded?

In examining the official statements on Obergefell v. Hodges — the same sex marriage case — from four conservative religious bodies, I found commonalities among all four. They all deplore the ruling, they are all stalwart in their beliefs in traditional marriage alone, and they all have serious concerns about their religious liberties.

But how do they feel about homosexuals, especially in light of this defeat for traditional marriage?

From the United States Conference of Catholic Bishops:

I encourage Catholics to move forward with faith, hope, and love: faith in the unchanging truth about marriage . . . hope that these truths will once again prevail in our society, not only by their logic, but by their great beauty and manifest service to the common good; and love for all our neighbors, even those who hate us or would punish us for our faith and moral convictions.

Christians must be committed to be good citizens and good neighbors, even as we cannot accept this redefinition of marriage in our churches and in our lives.

We affirm the human rights of all individuals and the inherent and equal value of all people. We respect the divinely given dignity of all people, no matter their sexual preference.

And from the leadership of the Union of Orthodox Jewish Congregations in America:

Our religion is emphatic in defining marriage as a relationship between a man and a woman. Our beliefs in this regard are unalterable. At the same time, we note that Judaism teaches respect for others and we condemn discrimination against individuals.

Religious bigotry, anyone? Where is the hate? Where are the ridiculous figures set in the mold of the family cult of Westboro Baptist Church, or in the cartoonish figure of Pat Robertson? It appears that the venom springs from Leftists, gay marriage activists, and their supporters eager to grind traditional Judeo-Christian beliefs into the dust. 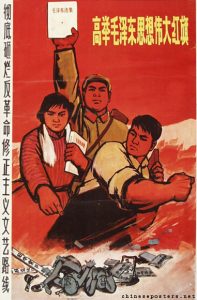 Warning against this Winner-Take-All bullying is gay conservative Tammy Bruce, who tweeted:

This is why Americans are concerned & why gay conservatives like myself work against the fascist bullies of the left https://t.co/JRdzN0xRYG

Gay-rights activism is also in severe need of a makeover. We can be loud and mean and spiteful. We’ve made a pastime out of shaming gay-marriage opponents, and we’ve been far too eager to call for someone to get fired from his job simply because he tweets out his reservations about LGBT issues. Friday’s SCOTUS decision is an opportunity for us to take a step back, remind ourselves that we are in a good place politically and socially, and make a renewed commitment to mature, democratic discourse. This means acknowledging that progress has been made.

Amen. And on this Sunday morning, I say once again — Amen.