Next post
Texas Republican Challenges Boehner for Speaker of the House

It all started with one innocent post on New Year’s Day, wishing people victory over their “stumbling blocks” in life. It even had a cute picture of a little boy and the family dog. But of course, nothing Sarah Palin does passes without comment, not even Happy New Year posts. 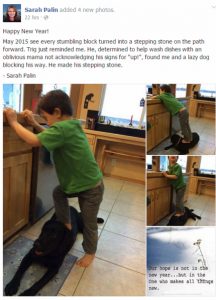 Naturally, the picture of Trig standing on a very mellow black lab caused knee-jerk Palin haters to start screaming for that absolute arbiter of animal treatment and morality, PETA.

@KemDizzle Unbelievable! I have forwarded this info to our Cruelty Investigation Department.

Yeah, because PETA has a stellar track record when it comes to animal care. But that doesn’t matter, because it’s SARAH PALIN. Imagine, after all, if some other celebrity had posted a similar picture. Surely, everyone would have freaked out then and it would have made national news?

Holy crap. Imagine the outrage if @SarahPalinUSA’s kid did *this*. Oh, wait…. pic.twitter.com/KTeZTZNunW

And no, that’s not a photoshop. While people also objected to The Ellen DeGeneres Show posting that picture (which you can see if you read the comments) last July, it didn’t make national news. At all. Not even a little. Plus, Ellen was PETA’s 2009 Person of the Year, so she is special.

Sarah Palin responded to the howling critics as only she could.

She really didn’t even need the rest of her post. Those two lines were perfect all by themselves.

But of course, PETA, being the self-righteous idiots that they are, then responded to her response. (This is how all great arguments are now hashed out – over social media platforms.)

PETA simply believes that people shouldn’t step on dogs, and judging by the reaction that we’ve seen to Sarah Palin’s Instagram photo, we’re far from alone in that belief. Palin’s Facebook response shows us that she knows PETA about as well as she knows geography. Yes, we campaign against the Iditarod because when the dogs aren’t being driven—sometimes to death—most live chained or inside cages for their entire lives. And we’re a vegan organization, so we sit on pleather couches, wear stylish vegan kicks, and consider fish friends, not food. (Also, by the way, we just sent a case of vegan caviar to Vladimir Putin—and no, you can’t see his house from yours, Ms. Palin.) We have no reason to believe that the Palin companion animals aren’t ordinarily pampered, and we wish the entire family a peaceful and humane 2015.

Aside from repeating the Saturday Night Live joke again as if it were real (hey, PETA, 2008 called, and the joke is well past stale and gone into moldy), PETA conveniently sidestepped the Ellen picture. At least, until they were called out on Twitter about it. Let the excuses begin.

@SawPuppet Ellen's twitter pics are often images sent to her from followers & fans.

@Johnniedale It is not a picture of her child.

Ellen is of the correct political party, you see, so she gets a pass – even though her show posted a nearly identical picture on Facebook. President Obama can admit to eating dog in his memoirs, and PETA said…. nothing. They were more upset that the Obamas didn’t adopt a dog from a shelter than they were about Barack Obama actually sampling dog meat. Oh, and all that worry over Ukraine? Doesn’t matter one whit to PETA – they have to convince Vladimir Putin to eat vegan caviar, not invade other countries. They take on the HARD tasks.

Happy New Year, same as the old year. Palin Derangement Syndrome is still alive and well. It’s not like the dog would have MOVED or anything if she didn’t want Trig standing on her. PETA insists that animals are so intelligent and ascribe human-like emotional states to them… but they fail to remember that all animals will instinctively react to pain. If the dog had been in pain, she would have gotten up and walked away. After all, PETA, isn’t a dog smart enough to know that?

And for the love of all that is holy, Sarah Palin had better never let Trig ride a horse. PETA might have a collective stroke.