Dozens of pro Russian gunmen stormed government buildings in Crimea this morning, raising the Russian flag in protest to the country’s new leaders. Crimea is a region with a Russian ethnic majority and is thought to be the last big stand in opposition to the formation of a new leadership in Kiev. A Reuters correspondent at the scene of the Crimean capital has claimed that the parliament door has been blockaded and no one is allowed to enter. 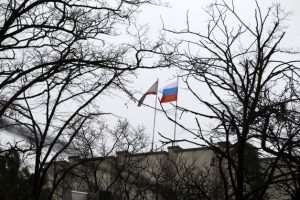 This comes in the wake of Russia’s recent move to put fighter jets on alert and perform military exercises involving 150,00 troops around Ukraine. However, Ukraine’s acting President, Oleksandr Turchynov, has issued a warning of his own.

“Any military movements, the more so if they are with weapons, beyond the boundaries of this territory will be seen by us as military aggression.”

Turchynov was hoping for a peaceful end to the aggression after stepping in to replace former president Viktor Yanukovych who fled to Russia for help. It is believed that Yanukovych is staying in a Kremlin sanatorium just outside of Moscow. He is being sought by the new leaders of Ukraine for the murder of approximately 100 people who died in the protests leading up to  Yanukovych fleeing for his life. Yanukovych is in denial of the new government stating that he still considers himself President and the new leaders are illegitimate. This will sound a little familiar and should hit home to many of us as Yanukovych also stated this:

Notice the word “extremists” when referring to citizens that not only wish to keep their freedom, but are actually fighting for it as well.  Regardless, a Russian official has confirmed that Yanukovych’s request for protection “was satisfied on the territory of Russia.”

Although Putin denies that the military exercises near Ukraine has anything to do with the situation directly related to the new interim government, he has not publicly commented as to whether or not he will acknowledge the new leaders as a legitimate government. His actions have definitely raised tension enough to force the US to possibly pull out their red sharpie and draw a new line. Secretary of State, John Kerry said that the US is considering a $1 billion loan package to the Ukraine as well as aid to the government to help with the economic crisis that they are facing. There doesn’t appear that there is much more that the US could do as far as a diplomatic response considering the hostile relationship between Obama and Putin. Also, last time I checked, Obama was considerably downsizing our military. Will Obama do the Harlem Shuffle again with his famous red line? Stay tuned. Victory Girls will keep you posted with the latest developments as they arise.