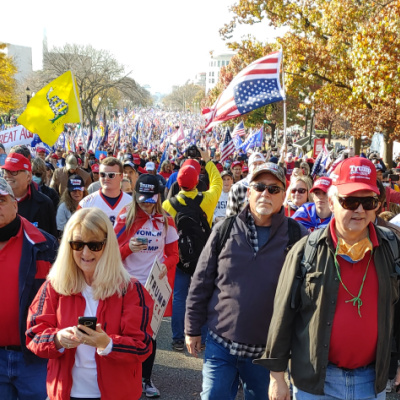 Are they dense or is this intentional? Stupid question. It’s both. Salon Magazine, which along with MSNBC, CNN, the Washinton Post and the New York Times, et. al, regularly assesses Trump supporters and ascribes the worst possible motives to us, is at it again. Salon writer Chauncey Devega regularly drools his inner most musings out onto his typing device and unleashes that drool onto anyone who reads the article. Devega told us that Trump voters are RACISTS and VIOLENT, but now he says that we are old and nostalgic for what never was. Oy vey!

Devega is really mining played out claims with this latest “What does MAGA mean in 2022? An aging movement longs for an America that never was”. Mr. Devega begins with the usual, that we see Trump as a god-king. That he, and we, are violent and narcissistic. Blah, blah and more blah.

Three paragraphs in, he gets to the central thesis of the piece:

Seven or so years on, what does MAGA mean now? And what have Trump and his movement accomplished? By any humane, reasonable or moral standards, nothing worth doing, or in any way “great.” They pushed American democracy to the brink of chaos. They normalized right-wing political violence, culminating (for now) in the Jan 6 coup attempt and attack on the Capitol. They strove to reverse the civil rights and human rights progress of the 20th and 21st centuries in America.

It wasn’t MAGA types that burned down cities in the Summer of 2020, screamed people out of restaurants, attacked Senator Rand Paul and wife and commentator Dan Bongino and his wife in the District of Columbia, or staked out the homes of Supreme Court Justices. Who has been launching attacks on Pro-Life centers? The Left still thinks January 6 was a coup attempt. We ask who was Ray Epps and why hasn’t Ashli Babbitt’s murderer been charged?

We MAGA types don’t want to reverse civil rights and human rights progress. Mr. Devega must be quacking about the right to murder the unborn. There are about 15 types of birth control and that doesn’t include the morning after pill or any of its iterations. Abortion is one of the high sacraments of the Left, because they love spilling the blood of the innocents. Maybe Mr. Devega is talking about Trans kids. To which we say, keep your grooming meat hooks off of our kids.

In the next paragraph he writes:

They elevated conspiracism, anti-intellectualism, a rejection of empirical reality and science, Christian nationalism, white supremacy, misogyny and hostile sexism, and a total disregard for the rule of law. America’s global reputation as an “indispensable nation” and the world’s greatest democracy (which was already damaged) was permanently stained by the Age of Trump. At least a million people died in America because of how the Trump regime and the Republican Party willfully sabotaged public health and relief efforts in response to the COVID pandemic.

Holee hippo poop. When historians look at the Age of Faucism, they will scratch their heads at the anti-science. As a matter of fact, telling people not to question the science is anti-science. We love empirical reality and science. Does White Supremacy include only Whites or does it include White allies and White adjacents or the pure of blood only? The rules change hourly.

THEN CHAUNCEY DEVEGA GETS TO THE “OLD” PORTION OF THE PIECE:

What does the MAGA movement actually mean in 2022? Who are its true believers? It is crucial for defenders of democracy to have answers to these fundamental questions. A new poll by Grinnell College and Selzer & Company offers a number of important findings:

NBC News reports that MAGA followers are mostly Protestant (61%) and disproportionately Southern (46%). In an age of declining religious observance overall, 40% say they attend religious services at least once a week.

Oh my stars and garters. We are not wet behind the ears. We have experience and we go to Church. Sounds like we think for ourselves. But, the best part is this:

Trump’s followers disproportionately work in skilled trades and other blue-collar professions. They tend to have average or above-average incomes but lack college degrees. That social cohort, according to social science research, feels a high degree of alienation and resentment toward “elites” and others in society perceived as passing them by, culturally or economically.

Ew, icky, blue collar types who probably shop at Walmart or worse, buy American. The “elites” that MAGA types don’t like are the condescending twats. And, as we have seen in recent international elections, Blue Collar Conservatives are on the ascent:

Common sense. Keeping the government out of our lives. Sounds like a World-wide Movement.