Previous post
Police to DNC: We Won't Play Your Games 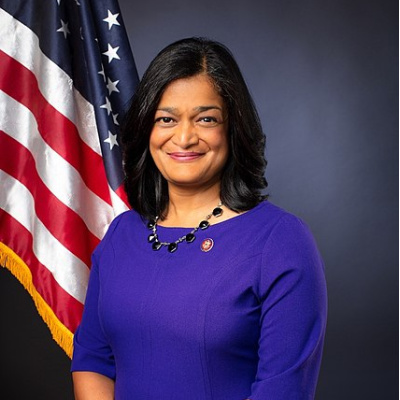 Representative Pramila Jayapal (D-WA) proved herself to be an ignorant, ill-mannered, grandstanding jackass yesterday in the House Judiciary Committee. She was rude to a fellow Congresswoman, and her behavior towards Bill Barr was beyond anything ever seen in the hallowed halls of U.S. Congress, since Congressman Preston Brooks beat Senator Charles Sumner with his cane. Far from being embarrassed by her lack of civility Jayapal is proud.

Yesterday, Attorney General Bill Barr appeared before the House Judiciary Committee of his own free will. He was not subpoenaed or compelled in any way. Barr went voluntarily. Hopefully, he won’t make that mistake ever again. Barr should risk jail rather than allowing himself to be pummeled mercilessly like that. Remember, this is Barr’s second time as Attorney General. He served under President George H.W. Bush in 1991. Until Barr agreed to serve President Donald Trump, Bill Barr was considered a sober, respectable lawyer.

If you thought Barr was going up the Hill to discuss reforming police work, foreign interventions in our elections, or any other of the thousands of problems facing our Nation, you were wrong. Barr went up those steps in order to be a pinata for a bunch of spoiled, undisciplined three year olds. Chairman Nadler called Barr everything but a child of God and even tried to deny him a potty break. Taking a cue from their leader the other toddlers/Democrats on the Committee followed suit. They were rude and condescending, and the shouts of “reclaiming my time” to prevent Barr from answering questions would have been comical on Saturday Night Live. But, these people are our servants. They each acted more like a three year old King Louis IV.

Pramila Jayapal was the worst of the worst. She indignantly corrected Rep. Debbie Lesko (R-AZ) when that Congresswoman mispronounced her name:

Lesko asks: “Mr. Attorney General, is that your understanding of what happened there? Do you agree with Ms. Jayapal that there was no takeover, it was just —”

“Jayapal,” she says. “If you’re going to say my name, please say it right. It’s Jayapal.”

Lesko acknowledges her, repeating, “JYE-ah-paul,” before proceeding with her question.

The written word doesn’t do justice to the hatred in Jayapal’s voice. You can see the video here.

The Attorney General bore the full force of the anger of Pramila Jayapal. Let’s go to the videotape:

Pramila Jayapal first makes up her own facts about the violent “protest” in Lafayette Square. Then, she makes up an Adam Schiff-style fairy tale about move on Michigan’s state capitol:

In one testy exchange, Rep. Pramila Jayapal (D-Wash.) accused Barr of failing to squash protests in Michigan over stay at home orders because they were “getting the president’s agenda done.”

When Barr tried to respond, she scolded him and said: “I’m starting to lose my temper.”

“When white men with swastikas storm a government building with guns, there is no need for the president to ‘activate’ you because they’re getting the President’s personal agenda done,” Jayapal said.

“But when black people and people of color protest police brutality, systemic racism and the president’s very own lack of response to those critical issues, then you forcibly remove them with armed federal officers pepper bombs, because they are considered terrorists by the president,” she continued.

The “white men” Jayapal is discussing were not just men, and there is no proof they were all white. They did not storm any Federal building or do any damage. There were no swastikas. The protesters were non-violent and they were protesting Governor Gretchen Witmer’s Michigan Covid lockdown. Here is the photographic evidence:

Here is the context of Ms Jayapal’s “swastika” allegations. The protestors were not Nazis or white supremicists. They were comparing Governor Whitmer to Hitler. Here is the proof: pic.twitter.com/tjZ7RIJFNK

But why let the facts get in the way. And, I hate to burst Primala Jayapal’s bubble, but most of the violent, bad actors in the cities who are destroying Federal properties are mostly white.

Before the hearing even started, Jayapal went on CNN to call Barr “Trump’s henchman”.

Bill Barr has always been, is now, and will always be the henchman for Donald Trump. He is doing an injustice to justice in America. pic.twitter.com/mdyjKPW9Er

Jayapal is quite proud of herself and considers herself a hero. She is a rude, ill-mannered, unlady-like child. She should be embarrassed, but she’s not got the grace to be embarrassed.