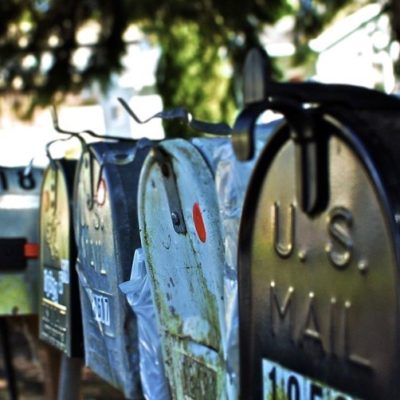 They’re coming to take them away, ha ha! The mailboxes, that is, and Joe Biden had something to say about that last night at a virtual fundraiser. I mean, how could one of his former VP picks be wrong about this, right?

Seriously, what in the fresh hell is really going on in Portland? Of course, Susan Rice got her intel from Mia Farrow:

Photo from friend in Portland, Oregon shows the dismantling of post boxes. Evidently this is happening all over the nation.

Please help our country by sending photo to newspeople, politicians & everyone. The destruction of our country cannot happen without any reaction from us pic.twitter.com/STRcFVYR8T

They’re going around literally with tractor trailers picking up mailboxes. You oughta go online and check out what they’re doing in Oregon. I mean, it’s bizarre!”-Joe Biden

He’s been doing his homework in the basement, apparently. Is this another attempt at keeping it weird in Portland? Of course not. It must be Trump-related. President Trump and Postmaster General, Louis DeJoy, (also a GOP donor) are going to screw this up for everybody. Don’t you know? President Trump is opposed to mail-in ballots. Therefore, he has organized for mailboxes to be removed from city streets. Go online and check it out. That’s some crazy stuff they are doing in Portland! There have been riots going on for over two months now in the city but, Joe Biden will tell you something…removing those mailboxes is truly bizarre!

Whatever are residents of (liberal) Portland and Eugene to do without their mailboxes that have been taken away? And now Susan Rice and Joe Biden are sounding off on this which can mean only one thing-Donald Trump is to blame! Donald Trump does not want Portland and Eugene voters to cast their ballots for Biden, who has been endorsed by the National Association of Letter Carriers. How will voters in these cities EVER get their ballots delivered without big, blue mailboxes? The intellectually superior liberals strike again with their twisted brand of logic. A truck of mailboxes being hauled away is their latest observation that their rights as voters are being stripped away. All of a sudden, they cannot deliver completed ballots to a ballot box?

While Biden, Rice and Farrow are conspiring and residents are freaking out, this is what is going on:

Historically, mailboxes have been removed for lack of use and installed in growth areas. When a collection box consistently receives very small amounts of mail for months on end, it costs the Postal Service money in fuel and work hours for letter carriers to drive to the mailbox and collect the mail. Removing the box is simply good business sense in that respect. It is important to note that anyone with a residential or business mailbox can use it as a vehicle to send outgoing mail.”-USPS spokesperson Kimberly Frum

Along comes the local news:

This from Portland’s “leading local news”. No bias is this reporter’s voice at all. She probably calls rioting thugs “protestors”.

How bizarre, how bizarre, don’t you think? C’mon Man! Since Rice and Biden couldn’t bother to have their people look into what is actually happening to these mailboxes, we did it for them. These mailboxes, according to this, will be either replaced with newer ones or relocated to more high-traffic areas to provide better efficiency in the pick up and delivery of mail. Yes, these mailboxes are strategically placed. Who’d a thunk it? We think this would be a good thing considering the United States Post Office is already casting caution to the wind that their lack of funding could cause a delay in delivery of ballots.

Not sure about you but I honestly can’t remember the last time I used a mail box like the ones that were hauled away on those, uh, tractor trailers but apparently, seeing a truckload of them was triggering to some.

Nobody uses those old, outdated mailboxes. But Biden probably does since he still listens to a phonograph. pic.twitter.com/2F8P23A66e

“Voting experts” are looking into these mailbox removals, according to The Washington Post.

In the meantime, look out for more conspiracy theories from the former National Security Advisor and Presidential hopeful, Joe Biden. Hold on to your mailboxes. Either Trump will haul them away or an Antifa jackalope in a dirty virtue-mask will throw one through your windows.