Next post
Goldberg Gets Slap On The Wrist From ABC 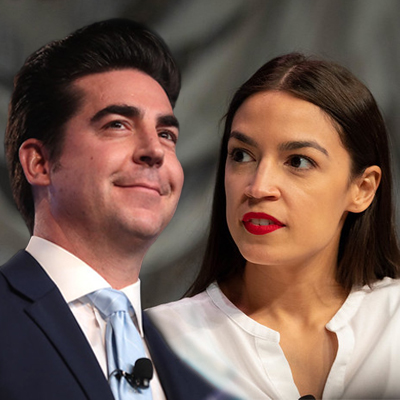 Jesse Watters, he of the perfectly coiffed hair, just got a major gig at Fox News. He now hosts “Jesse Watters Primetime,” at 7 pm ET, and on Monday he exposed Rep. Alexandria Ocasio-Cortez. (As a fraud, that is. What were you thinking?)

Beginning his monologue on AOC with a reference to the infamous Fyre Festival flop of 2017 (ouch!), he showed how the media promoted her as the political “It” girl of 2018, “a planned, packaged and processed candidate sold to a hungry young generation by a slick and shallow media”:

“In 2018, AOC was the fresh face on the block after she upset longtime Democratic incumbent congressman Joe Crowley. The media fell head over heels for their ‘it girl.'”

It all started when Alexandria Ocasio-Cortez hitched her wagon to socialist Bernie Sanders in his 2016 Presidential bid. But even though Sanders didn’t get the Dems’ nod, one of the fellow travelers in his campaign noticed the outspoken young woman from Queens.

Saikat Chakrabarti, a software engineer and one of the co-founders of the young far-left group “Justice Democrats,” helped to recruit Alexandria Ocasio-Cortez to challenge incumbent Rep. Joe Crowley. But Chakrabarti did more than just recruit AOC — he also became her campaign manager, and later her chief of staff.

“What does Alexandria Ocasio-Cortez think about all this? It isn’t her job to think. That’s Chakrabarti’s function. Her job is to provide him with a platform to carry out his grandiose political schemes.”

In other words, while AOC played the great and grandiose Wizard of Queens, Chakrabarti was the little man behind the curtain.

However, Chakrabarti left her team in August, 2019. And then AOC “lost the heat on her fastball,” as Jesse Watters said:

“Without the man behind the curtain, she stopped making a splash on social media, never goes viral anymore, her timing and wit vanished with her chief of staff.”

Now, even though Alexandria Ocasio-Cortez is in her second congressional term, none of her sponsored bills has become law. Nor has she done much for her district, either.

In his monologue, Watters continued showed how the media flipped for this young woman who promised to be a new face of the Democratic Party. But she ended up being, as Watters said, “all sizzle, no steak.” Once Chakrabarti left, she floundered. She couldn’t answer policy questions with any depth of knowledge, and even gave ridiculous answers to questions (“employment is up because everyone is working two jobs”).

As for her constituents, Ocasio-Cortez hasn’t done much for them, either. In 2019, she scuttled an Amazon deal in which the mega-company sought to establish a headquarters in New York City. Along with it would come 25,000 jobs. She didn’t like big capitalists getting tax breaks, which is a fair cop, but meanwhile New Yorkers didn’t get the benefit of a big employer. Instead, she said that the tax breaks that Amazon would’ve gotten could’ve gone for schools or subway repair.

But no one in the friendly media called her on it. Nor did she ever appear on conservative news outlets for any real grilling.

Meanwhile, Ocasio-Cortez recently said that any Republican who criticizes her just “wants to to date me.” That kind of high school comment shows her to be a lightweight, the perfect example of the Peter Principle.

“Jesse Watters Primetime” debuted on January 24, making this only the second week for the nascent program. But according to ratings, it’s already in the top five of all cable news shows. Not only that, but the only shows to pass it in ratings are all Fox News programs. As for competing cable networks — only MSNBC’s “The Rachel Maddow Show” landed in the top ten, at number seven.

If Watters continues to skewer liberals and Democrats with the same skill and verve as he pulverized AOC, his program will be a powerhouse. The time is ripe for exposing the fraud of the left, and he’s just the guy to do it. Perfectly coiffed hair and all.