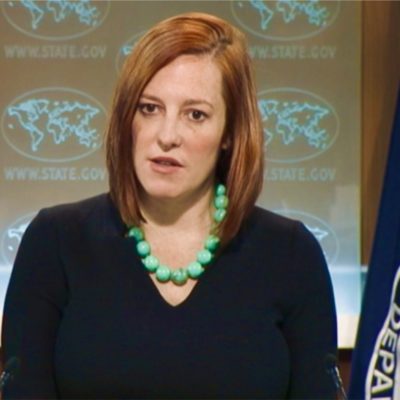 Jennifer Psaki has been named as Joe Biden’s possible White House Press secretary. The media is squeeing with joy over the fact that Biden’s team is ALL FEMALE, while hoping we ignore that President Trump’s teams have been all female for the entirety of his administration.

But I digress. Joe Biden’s announcement included this gem:

““Communicating directly and truthfully to the American people is one of the most important duties of a President, and this team will be entrusted with the tremendous responsibility of connecting the American people to the White House,” Biden said in a statement.”

Yes, I know. Laughter is indeed the best medicine isn’t it? And believe me, there is much to laugh about regarding the Biden campaign statement. A. That he even wrote it given he was getting fitted for a walking boot for his foot fracture, and B. That any former Obama Administration person could be even remotely considered as “truthful.”

Someone from The NY Times actually did some research on questionable consulting and investment firm ties that many members of the Biden team has. WestExec Advisors is a global consulting team. Those involved with the team are now potential Biden Administration choices, which raises serious transparency and ethical questions.

“WestExec’s founders include Antony J. Blinken, Mr. Biden’s choice to be his secretary of state, and Michèle A. Flournoy, one of the leading candidates to be his defense secretary. Among others to come out of WestExec are Avril Haines, Mr. Biden’s pick to be director of national intelligence; Christina Killingsworth, who is helping the president-elect organize his White House budget office; Ely Ratner, who is helping organize the Biden transition at the Pentagon; and Jennifer Psaki, an adviser on Mr. Biden’s transition team.”

Jennifer Psaki was the WH Communications Director during the Obama Administration, and then went to work as John Kerry’s Press Secretary when he was Secretary of State. WestExec is refusing to disclose any of its clients, many of whom are and have been doing business with the Pentagon and State Department. It isn’t so much that it is a need to know WHO the clients are, it should be known HOW the clients got those contracts and if there were any questionable maneuvers utilized by the WestExec founders, Jennifer Psaki included.

That’s a red flag for sure. However, that’s not the only one. Jennifer Psaki has a history of not providing truthful information to the press. Heck, she was Press Secretary while Obama and John Kerry were sneakily crafting the horrendous Iran Deal. Even more so, it’s the fact that she got caught lying about the State Department’s deletion of key information from a press briefing regarding the Iran Deal.

Specifically, what was deleted and then later restored, was an exchange between James Rosen and Jennifer Psaki regarding lying about when the Iran Deal talks actually started. Jen’s response? She agreed that yes, it’s ok to lie when diplomacy with state-sponsored terrorism countries is at stake. Furthermore, in regards to the video itself, she had issues.

Jennifer went all in on blaming the deletion of that information as a “glitch.” Then it was suddenly restored.

The timing of that restoration was also suspect given the Wall Street Journal broke the story of the $400 million on pallets that was airlifted to Iran in the dead of night, along with the additional $1.3 billion in lottery winnings the U.S. handed to Iran as the same time.

The Obama Administration has continually tried to tout the Iran Deal as a treaty, but even Jennifer Psaki admitted during a briefing that the Iran Deal was “non-binding.”

Remember that time when Iran, after the Iran Deal was crafted, seized our ships and Navy sailors? One would’ve expected the former President Obama to be so concerned that he’d raise the issue in speeches, specifically his upcoming SOTU. Did he plan to do so? According to Jennifer, our sailors and Navy ships weren’t important enough. What WAS important is Obama doing a ‘look at MEEEE!!” dance about the Iran Deal during his last SOTU.

The possible Biden Administration tells us that their choices for WH Communications will be truthful with the American people. Considering they are planning to staff up with former Obama Administration folks, one can and should reasonably presume that truthfulness of any kind is out the window.