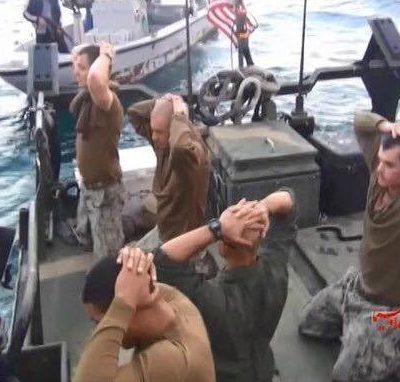 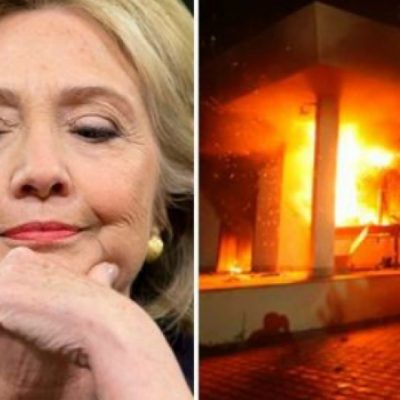 Next post
Victory Girls Vine: Hillary is Too Busy for #13Hours 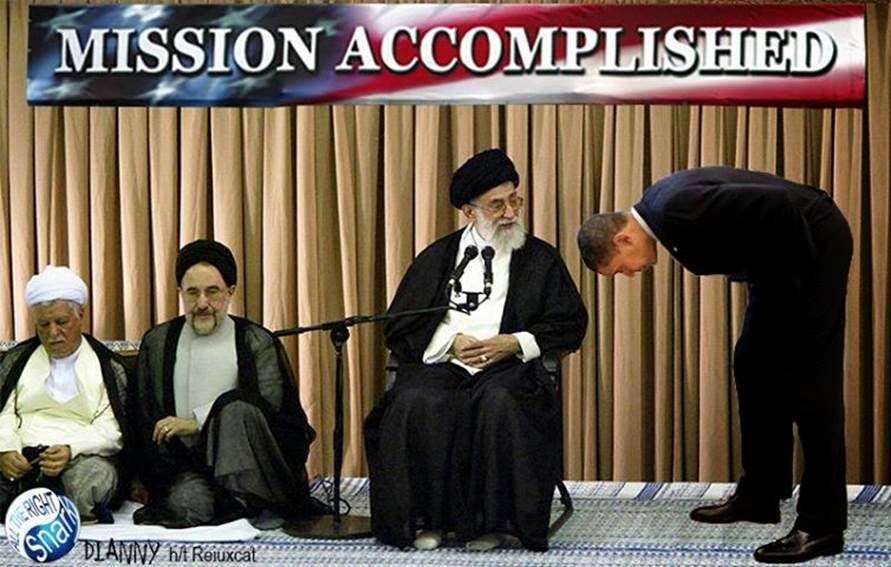 If you thought this week’s $1.5 billion Powerball was a big deal, think again. The world’s largest Powerball is in play right now. Unfortunately for all of us, there will only be one player and one winner in this game. Yes, I’m talking about Iran ladies and gents. 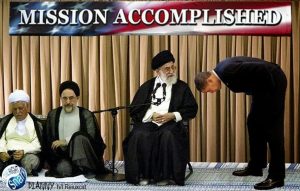 The only “Mission Accomplished” I see here is one that includes bowing, scraping, and kowtowing in the face of even minute resistance from our allies and enemies alike. With one swipe of his handy dandy Executive Pen, Obama yesterday afternoon gave Iran, a country that has fueled and funded terrorism the world over, a blank check.

Pres Obama issues Executive Order to lift US sanctions imposed against Iran's nuclear program. Has notified Congress of his action.

Yes, Obama was all presidential and stuff…for about a minute before running out to a fancy schmancy date night dinner with Michelle. Yee Haw!! Right??

After a leisurely 3 hours dining out with friends, the Obamas have returned to the WH. No @POTUS statement tonight.

No. As Kim so eloquently put it, this abusive relationship we’ve now been shoved into is now reaping the whirlwind, one $1.7 billion dollar extortion payment at a time.

This is quite a development: the US government just made a direct payment to the Iranian government of $1.7 billion. pic.twitter.com/5VjGFPWtal

Oh but not to worry!! Obama is absolutely positively SURE that if Iran takes one bad step or even tries to cheat, we’ll catch them!

Pres says intl inspectors will monitor Iran 24/365. If Iran tries to cheat, "we will catch them," says @POTUS. pic.twitter.com/kYmCgzXTJL

Never mind the sticky little fact that IRAN HAS ALREADY BEEN CHEATING!!  Yes, I’m yelling. BTW: If you can handle it w/o breaking your monitor – here’s the video of his “look at MEEEEE” press conference this morning.

Interestingly, while the Duffer in Chief was speaking, this happened:

The United States on Sunday imposed sanctions against 11 individuals and entities involved in Iran’s ballistic missile program as a result of Tehran’s firing of a medium-range ballistic missile, a new punishment one day after the Obama administration lifted economic penalties against the Islamic Republic over its nuclear program.

The missile program “poses a significant threat to regional and global security, and it will continue to be subject to international sanctions,” said Adam J. Szubin, the Treasury’s acting undersecretary for terrorism and financial intelligence in a statement.

He said the U.S. has made it clear that it will “vigorously press sanctions against Iranian activities” outside the terms of the nuclear agreement. Szubin cited Iran’s “support for terrorism, regional destabilization, human rights abuses, and ballistic missile program.”

Okayyyyyy. Help me out here guys… on the one hand we’re gonna hand over tons of money, $1 billion dribble at a time..and on the other hand we’re going to impose MORE sanctions as long as they don’t hinder the nuclear monetary extortion agreement? That will work out SO very well won’t it? Yeah no.

This is one deal, this is one lottery that NO one should be playing. And yet, here we are. The future radical Islamic terrorism that we will see around the globe due to Iran’s lotto winnings? All thanks to a willfully blind President who cannot see the forest for the trees of terrorism that embodies Iran.