Jamie Raskin In For Nadler At Rules Committee

Jamie Raskin In For Nadler At Rules Committee 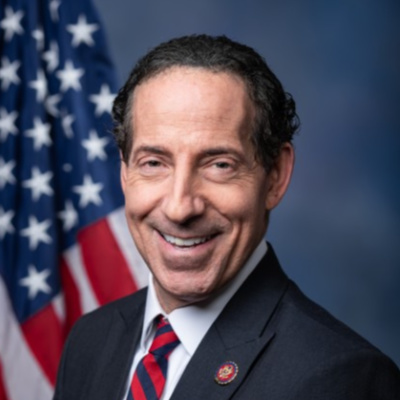 Representative Jerrold Nadler (Jerry), Chairman of the (powerful) House Judiciary Committee was supposed to appear with ranking member Doug Collins before the House Rules Committee today. Jerry’s wife, Joyce, is ill and Nadler is at home to care for her. In his place, Jamie Raskin (D-MD) is making the Judiciary case for the Impeachment of President Donald J. Trump. You may be asking yourself, “Who is Jamie Raskin?” Let me tell you.

Raskin was born in the District of Columbia. His father, Marcus Raskin, was a Progressive activist and adviser to President John F. Kennedy. Raskin claims that his father was on President Nixon’s enemies list. The Congressman graduated from Harvard University with a Bachelor of Arts and Harvard Law School with a Juris Doctorate.

Mr. Raskin was a Maryland State lawmaker and is now in his second term as a United States Representative. For about 25 years, Jamie Raskin taught at the American University’s Washington College of Law. I learned this from a tasty, little article in The Nation. As I read the article, I could almost see the writer and editors gleefully rubbing their ink-stained claws. Because:

It’s not as if Raskin was uninformed. Before his 2016 election to the House, he spent a quarter century at American University’s Washington College of Law, where he taught about famous impeachment cases and earned national recognition for his ruminations on the Constitution’s system of checks and balances.

You see it too, right. That makes what goes before in the article a little confusing. The opening paragraphs say:

Jamie Raskin is trying to read a book about impeachment every couple of days. On a Tuesday in late November, when final preparations were being made for the Trump impeachment inquiry to move to the House Judiciary Committee on which he sits, the Democratic congressman from Maryland was racing out of his office. He realized he’d left behind the most recent book, circled back to his office, and grabbed a slim volume by James Reston Jr., The Impeachment Diary: Eyewitness to the Removal of a President.

“This is it!” said the congressman, holding aloft the book, on the 1974 impeachment of President Richard Nixon. “I’m trying to read as much material as I can about Andrew Johnson, Richard Nixon, the Clinton impeachment, and I’m trying to get a sense of the process of each of those cases and the patterns of discussion and debate that are likely to return.”

Um, I only have 12 hours of business law, so I am clearly no expert, but wouldn’t Raskin have read everything he could about impeachment cases before he taught them? Oh, never mind. Why let details get in the way of a good story. It’s not like we are talking hundreds of cases. Nixon resigned before he was impeached. Andrew Johnson and Bill Clinton were impeached, but not convicted. As of 2017, only 15 Federal judges have been impeached. And, now we are at the Trump impeachment. It’s not like we are talking hundreds here.

Here’s one more yummy bit from The Nation’s article:

“Oftentimes my Democratic colleagues will jump up on the floor after Trump commits this or that outrage against the Constitution or the Bill of Rights, and they’ll say, ‘Mr. President, you have to stop doing this. We are a coequal branch of government.’ And I just want to scream,” Raskin says. “I know that this is dogma in fifth-grade social studies classes across the country, but we are not a coequal branch of government. We are the primary and predominant branch of government, and my colleagues need to understand that.” Raskin tested the concept at the Unitarian church, asking, “If we were coequal branches, why is it that the founders say that Congress can impeach the president but the president can’t impeach the Congress?” That line earned a standing ovation, which didn’t really surprise him.

Girl, in the back, raises hand and shouts, “Oooo, oooo, I know, I know, Mr. Raskin?” The House and the Senate are a co-equal branch with the Executive and Judicial Branches. The Founders relied on the House to gather facts for impeachment and the Senate to hold the trial. The President cannot impeach the Congress because House members are subject to criminal prosecution and it is up to the people of the district to dump a lousy a lousy Representative.

Here is Jamie Raskin’s opening statement from this morning:

Lord, help us all. Is there any Democrat elected official who doesn’t come off as an oleaginous, arrogant jerk. Maybe, that is a requirement to hold office.

As the article from The Nation says: “The Maryland representative has been training for the Trump impeachment inquiry his whole life.” He will be able to eat dinner out for the rest of his life (like Woodward and Bernstein) if he can get a Republican President’s scalp on his belt. And, that’s what this is all about.

Now, you know exactly who Jamie Raskin is.