Previous post
Biden and the Quest for the Perfect Vagina 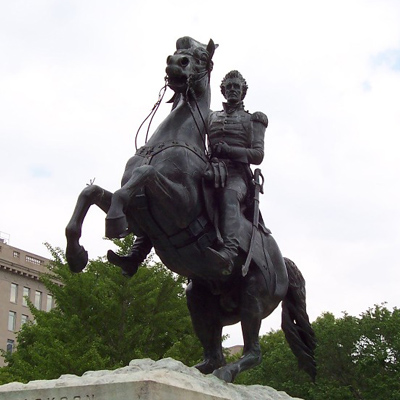 I felt a great sense of Schadenfreude late on Saturday when the Department of Justice announced charges against four men who tried to tear down a statue of Pres. Andrew Jackson. I’ll bet you probably did too.

This was the scene a few days ago when hooligans tried to topple the Jackson statue in Lafayette Park in Washington, DC. They had ropes cinched around Old Hickory, but the police showed up in the nick of time. Officers fought back the mob with tear gas and some well-deserved strong-arm tactics.

As I’m sure you’re aware, anarchists and other leftist scum have been merrily toppling statues over the past few weeks, supposedly in rage for the death of George Floyd.

Exactly. They no longer give a whit for the memory of George Floyd — if they ever cared in the first place. They use his name to justify attacks on symbols of America.

Statues of Confederates have been their main targets, but these ignoramuses have toppled a statue of Union general Ulysses Grant and a Catholic saint. They’ve even defaced the statue of a Philadelphia abolitionist. They shriek at black men protecting a statue of Lincoln the Emancipator. Freed slaves had funded that statue in 1876, which fortunately, still stands.

Finally, like the rest of us normal people, President Trump had enough of this nonsense. So on Friday, he signed an executive order targeting such vandalism. The order called for prosecution of these dirtbags, and also threatened to withhold funds from local governments who didn’t protect monuments.

“Anarchists and left-wing extremists have sought to advance a fringe ideology that paints the United States of America as fundamentally unjust.”

“Key targets in the violent extremists’ campaign against our country are public monuments, memorials and statues.”

The New York Times scoffed at the order.

“But it is unclear whether the Trump administration could actually follow through on that threat.”

And Trump said, Just watch me!

So Trump took to his favorite sounding board: Twitter. First, the FBI released a poster with 15 people they were looking for in connection with the Jackson statue incident. Then Trump tweeted the poster.

MANY people in custody, with many others being sought for Vandalization of Federal Property in Lafayette Park. 10 year prison sentences! @FBIWFO pic.twitter.com/mrLyxbWNvq

Nor did he stop there. On Saturday, he tweeted the picture of suspect #6, who looks rather like a Game of Thrones wannabe. And like he could use a bath, too.

One of the perps, 20-year-old Connor Matthew Judd, has been arrested. Meanwhile, the other three men — who interestingly are between the ages of 37 and 47 — remain at large.

Acting US Attorney Michael R. Sherwin, in charging the men with destruction of federal property, warned in a statement:

“This Office remains steadfast in its commitment to protect the sacred First Amendment right of individuals to peacefully protest, but these charges should serve as a warning to those who choose to desecrate the statues and monuments that adorn our nation’s capital: your violent behavior and criminal conduct will not be tolerated.”

Good. And I hope that this is just the start of the 500 investigations against rioters and vandals that Attorney General Bill Barr says he’s conducting.

I think most Americans are mature enough to realize that yes, many statues honor people who have some pretty big warts. Andrew Jackson, for example, removed Native Americans from their lands in 1830. Even frontier legend Davy Crockett, who was a member of Congress, bitterly opposed the Indian Removal Act. But I’m sure that the liberal scum who tried to topple the Jackson statue would do the same to a statue of Crockett. After all, Davy Crockett “killed him a bear when he was only three,” as the song goes. Certainly that’s not true, but he did dispatch a lot of the beasts.

So where does all this end?

First of all, while Andrew Jackson is certainly not my favorite president, I don’t want his statue to come down, either. I don’t like seeing any monuments removed, even those of Confederate soldiers, for which I have no affinity, since I was born and raised in the North. (Sorry, I just don’t get the Southern thing.)

But it’s important to remember that anarchists and leftists don’t believe in compromise. If you give just a little, they’ll want the whole shebang. Just as gay activists post-Obergefell sought to destroy traditional Christians, the new American Taliban will not stop until our history and heritage are decimated.

Keep the statues up, no matter who they are. Don’t change the names of buildings or towns, no matter whom they were named for. Extremists will give us no quarter, and we shouldn’t hand them any more victories, no matter how small. We may try to be reasonable, but they sure as hell won’t.