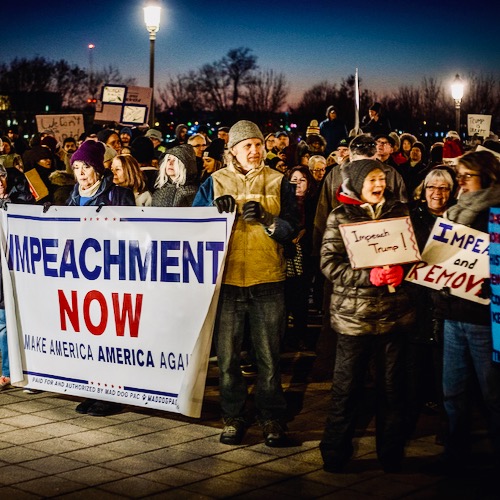 The Impeachment Palooza will continue per the Senate vote yesterday.

The New York Times along with multiple other “news media” sites have proclaimed that this is a very Constitutional proceeding.

“The Senate voted on Tuesday to proceed with the impeachment trial of former President Donald J. Trump, rejecting his defense team’s claim that it would be unconstitutional to prosecute a president after leaving office. But the final tally signaled that his Republican allies could muster enough support to potentially block the two-thirds necessary for conviction.

The 56-to-44 vote, with six Republicans joining all 50 Democrats, paved the way for the House Democrats trying the case to formally open their arguments on Wednesday afternoon as they seek to prove that Mr. Trump incited an insurrection by encouraging supporters who stormed the Capitol last month and disrupted the counting of Electoral College votes.”

The day was filled with videos showing the idiot cretins getting into the Capitol while Capitol Police inexplicably stood by. That’s one of the questions that the Democrats refuse to ask and the Capitol Police had no plan. Why did they stand by? Why did some of them open doors and let the idiots in? If the chief warned that there might be issues several weeks before January 6th, then why the tepid response?

The hypocrisy of CNN putting a “viewer discretion advised” disclaimer on this, when Ali Veshi and others stood by this summer while businesses and cars were burning down behind them is jaw-dropping. Even more so when you realize this was an edited “doctored” video, which previously the media and Democrats proclaimed was taboo.

Meanwhile, several Republicans pointed out the absurdity and hypocrisy of the second impeachment palooza. Rand Paul rightly called Chuck Schumer on the carpet for his rhetoric. He’s right, if this impeachment palooza is predicated upon what rhetoric is violent and which is not, then the Democrats have much to answer for.

Meanwhile, as many continue to point out, the timeline just doesn’t fit regarding Trump’s speech and those who went into the Capitol.

Can one circle back and tap dance at the same time? Jen is attempting it less than gracefully.

A former Congresswoman has a brilliant idea! By convicting Donald Trump, Senate Republicans will unite the country.

“They need to denounce Trump’s lies about the election being stolen and his incitement of insurrection. Like Nixon’s, Donald Trump’s own words condemn him. He has provided us with the equivalent of Nixon’s smoking gun tape, in the form of his many tweets and videotaped public statements.

We have his invitations to supporters to come to Washington last month, where it would be “wild,” his incendiary speech in which he urged the mob to go to the Capitol and “fight,” his praise for the insurrectionists while the attack was ongoing, and his claim that his rally remarks were “totally appropriate.” We also know that back at the White House, in violation of his role as commander in chief and his oath of office to take care that the laws are faithfully executed, Trump failed to call in reinforcements for the besieged Capitol Police and failed to protect members of the House and Senate.”

I’ll admit it. I laughed long and hard after reading her opinion piece. In regards to the above, equating Trump’s speech with Nixon’s Watergate is a major stretch. Furthermore, it wasn’t up to President Trump to call in National Guard reinforcements. Those in charge of the Capitol Police – PELOSI and SCHUMER – had to make the request! And…they didn’t.

Bot only that, but Holtzman’s assertions fly in the face of what we now know. The left has been working overtime for the last year to “fortify” …RIG the election in favor of Biden. Furthermore, they had mobs standing by ready to riot and burn cities down if President Trump prevailed. Remember the Transition Integrity Project? That was the tip of the iceberg.

“So, when the American people were denied the ability to witness the electoral college objections were Trump’s complaints simply being “de-elevated”? It was all due to an ensuing riot that the Capitol Police and National Guard did nothing to stop. There also was a purported “stand down” order (or was it a “standy by” order?).”

Meanwhile, as the House impeachment managers attempt to win the day, while getting smacked around by Jonathan Turley, the rest of Congress is on vacation.

Welcome to the stupidest week in the Senate!

While Speaker Pelosi has backbenchers make her case for impeachment, she sent the rest of the House home. She’s making a mockery of Congress.

My full statement on this disgusting process⬇️https://t.co/vaAqBMgtF1

Once again, while the Senate and House Democrats play their impeachment palooza games, Americans are left with less than nothing.