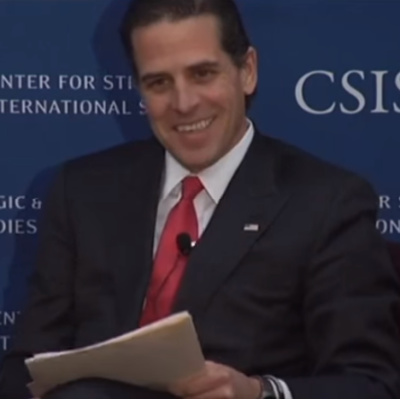 During the Impeachment Trial of President Donald Trump, Hunter Biden and his dealings in Ukraine were brought up often. His dealings in China were not a big concern at the time. His ties to businesses with ties to the Chinese Communist Party and human rights violations are much more problematic and need to be investigated. Not that there are any journalists in the media who will do the type digging needed.

Last we saw Hunter Biden, he was introducing his Dad, Joe, at the Democrat National Convention, while lionizing his dead brother, Beau. As Deanna wrote, the Democrat Party largely papered over Hunter’s rather sordid dating history, read it here. The Party also blotted out his self-admitted drug and alcohol problems and discharge from the Naval Reserve.

In Washington, D.C., deal-making and nepotism among the powerful are considered usual, customary and reasonable. This is part of the rot in the roots of the Deep State. A sitting Vice President’s son is awarded a position on the board of a energy company and it’s no big thing. The New York Times debunked four viral rumors about the Hunter Biden deal:

Once members of Congress turned their attention to Mr. Trump’s dealings with Ukraine, incorrect statements about the former vice president and his son started circulating again in far-right corners of the internet and on social media platforms like Facebook. Mainstream conservative media outlets like Fox News began running with some of the theories and Mr. Trump echoed them.

Oh, those far-right rumor mills. Nothing to see here, move along, deplorables.

What is appalling, in light of Hidin’ Biden’s Presidential run, is the medias complete disregard for his son’s China deals. It’s not just that there is no Chinese company that is not controlled by the Chinese Communist Party. It is the human rights violations that these companies “ignore”. I don’t like to use the word ignore. The world knows that China uses enforced labor and harvests organs from dissidents. It is more honest to think of these companies as complicit. Every executive in the C-Suite knows exactly what is going on in China, but cheap labor and fat profits are too attractive to let get away.

“Blue collar” Joe has claimed that that he will go after China in the right way. I have no idea what Joe Biden is saying, but here he explains his China policy:

This brings us to Hunter Biden and his China deals. The Washington Free Beacon has an excellent article, “Hunter Biden Holds Stake in Chinese Company Sanctioned for Human-Rights Abuses”. From the article:

Bohai Harvest RST Shanghai Equity, an investment firm that Hunter Biden owns a stake in, initially invested in Megvii, a sanctioned Chinese tech company that specializes in facial recognition software, in 2017, according to the company’s website. The firm holds a nearly 2 percent stake in Megvii through two holding companies, according to a prospectus filed by Megvii as part of its application for a listing on the Hong Kong stock exchange last year.

Under President Xi, China has cracked down on Hong Kong, internal dissidents and Muslim minority groups like the Uighurs. Since 2018, one and a half million people have been moved into re-education, work camps. How does China decide who goes into these camps? China just doesn’t identify minorities for the camps. The Megvii tech company mentioned above specializes in facial recognition software. Again, from the Free Beacon article:

Chinese surveillance and facial recognition companies play a key role in the government’s oppression of ethnic minorities, according to Peter Irwin, senior program officer with the Uyghur Human Rights Project.

“Surveillance is central,” said Irwin. “Chinese surveillance companies have been totally enabling the Chinese government to do what it’s doing.”

“Where Megvii and these facial recognition companies come in is they analyze the data and they spit out some sort of algorithm” to determine whether individuals under surveillance should be detained, said Irwin. He said the Chinese government has been systematically targeting Uighurs through a program of high-tech surveillance, reeducation and forced labor camps, and other repressive security measures.

Those algorithms will identify those who are enemies of the state and should be detained. Hunter Biden has stepped down from the board of Bohai Harvest, but still owns a ten percent stake in the investment company. This means the company is still in his portfolio and he still profits.

Given Hunter Biden’s messy personal life, if his father were to become President (God forbid!), he would be ripe for plucking in a blackmail scheme by the CCP. Is there no one with clean hands in the world of journalism that would ask about this?