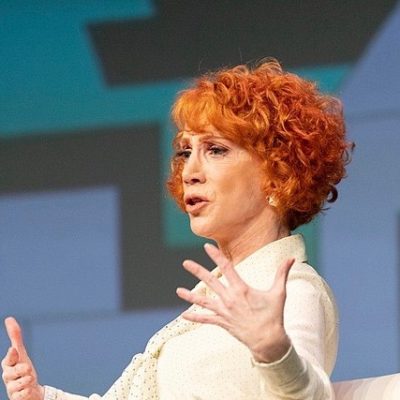 Kathy Griffin is starving for a little more publicity these days. She’s been in hiding for a bit after her ketchup-soaked Trump mask stint but (to quote ol’ Joe Biden), make no mistake, she is not keeping her mouth shut.

We wish she would have stayed in hiding. Honestly, who, in their right mind would listen to her, anyway? Doesn’t matter, she’s back to tweeting.

Funny how they told Trump to put the phone down.

Griffin’s tweet is short but powerful, and not in a good way. While her concern might be authentic, that does not mean anybody should be taking it seriously. It’s true that some people are calling for a national divorce (usually peaceful), but the likelihood of an actual civil war coming down the pipeline shortly is laughable and unrealistic.

In fact, her tweet serves as a crucial lesson in the dangers of hyper-partisan rhetoric on the American psyche.”-Cameron Arcand, Red State

Apparently, 2.1 million followers still find this chick relevant. And yes… She plastered this all over the Internet for everyone to see. So, Ms. Griffin, you really don’t think there will be any rioting if Democrats lose?

Who burned down Minneapolis??

And, fun fact, these are not “MAGA Morons”:

Mirror mirror on the wall. Who is the dumbest of them all? So much for the loving, tolerant, excepting, “love me I’m a liberal”, Democrats. You vote Republican in the midterms? Expect a civil war. Translation: Expect an epic screaming-at-the-sky-breaking-windows-setting-things-on-fire temper tantrum with from the left because they are immature, asinine little children.

Now, I’m sure the left, to include politicians, the media, and (now) d-list comedians like Kathy Griffin are so ecstatic that Donald Trump possibly held onto nuclear secrets at Mar-a-Lago. They are probably giddy as heck at this news. But it’s not going to stop them from taking pot shots at anyone who has decidedly gone against the ideology of the Democrats these days. Even those who are not in Trump’s camp. Griffin and the Democrats have drawn their line in the sand and there is no in-between with these people. You are either on their side or you want an all-out civil war. Honestly, at least some liberal media outlets or seeing the lunacy in all of this:

How can an American president go wrong in identifying threats to democracy? Biden offered a master class.”-Bret Stephens, The New York Times

You think? The goal of the left is to divide into demonize the opposite side. According to some blue voters, there is nothing that any red voter can do to make them feel any more compassionate towards the opposite side. We can’t blame this all on Kathy Griffin. Our commander in chief served up a nice heaping helping of hate last Thursday night.

Biden claimed to distinguish MAGA Republicans from mainstream ones and then proceeded to conflate them. That may resonate with partisan Democrats who have never seen a conservative they didn’t consider a bigot or a fool. But it gives the lie to the idea that dismantling MAGA Republicanism is the prime objective of the president or his party.”--Bret Stephens, The New York Times

You see, Biden and the likes of Griffin and the left don’t care about distinguishing Republicans and Conservatives. We are all “MAGA Republicans” now. Every, single one of us. It is truly “us” and “them”. The party that is so hyper-obsessed on individualism and all of the nuances in-between (you can, after all, identify as 35 different genders) clumps all red voters as one and the same. (And Conservatives are bigoted and judgmental?)

But let’s continue to blame the other side for picking on YOU, Griffin. Even though, YOU started it:

You guys. The maga blue checks are at it again. Because they are constantly threatening Civil War, they are now trying to suggest that I am the one who is threatening a Civil War. Because you know, that’s my thing. 🙄 https://t.co/bugd1SP1cr

Oh. My. God. Just put the phone down, Kathy. Walk away.

Kathy Griffin and her followers claim that she wasn’t directly inciting violence. But, in fact, a lot of the civil unrest was brought on largely in part by her fellow Democrats. Color us shocked that they’re now parroting, “vote like me or there will be violence.” Or, “Vote like me or there will be unrest.” I mean, you never know who’s face Griffin will slather in ketchup again.

If you want the country to continue to go to crap, listen to some has-been celebrity. Seriously, look at who is in office now with a huge helping from Alyssa Milano, Cardi B,The Chicks (your name is still insulting to feminists, girls), Barbara Streisand, Anna Wintour, Cher, Madonna and Whoopi (not Jewish) Goldberg. You bet your ass Griffin and her crew of like-mined dimwits won’t be fighting in the streets if a civil war breaks out. They’ll throw their armed guards in front of their gated communities while pontificating from their cell phones.

This begs the question: haven’t the Dems listened to enough of the brain-dead?

I think we know the answer.