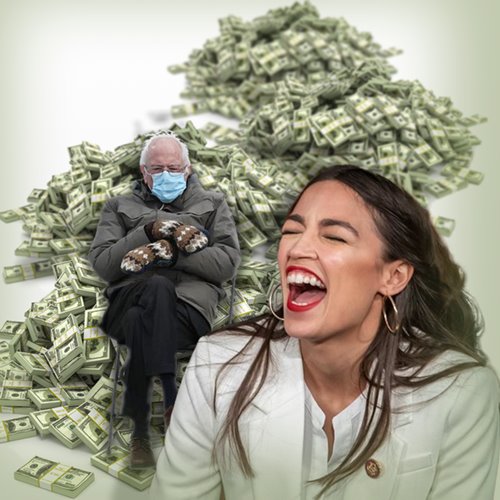 Public Housing will be fixed courtesy of the Green New Deal! That’s what AOC and Bernie, the angry elf, are peddling this week.

For a piddly amount of $172 billion over ten years, public housing will be remodeled according to all Green New Deal specifications.

“In a statement, Ocasio-Cortez called the bill’s provisions essential to building on the $2 trillion infrastructure plan unveiled by the White House earlier this month.

“With America facing an affordable housing crisis and the perils of climate change, we must invest in our housing infrastructure now. We also must be honest about the scale of the problem,” she said in a statement Monday.

“Just to address the backlog of critical maintenance repairs in [the New York City Housing Authority] and nowhere else — chipping lead paint, broken heating systems, failing gas utilities — would require $40M, what is currently in the American Jobs Plan. This bill would invest up to $172 billion over ten years, improving the lives of nearly 2 million individuals and securing the long term future of the nation’s public housing stock,” she said.”

"A Green New Deal for Public Housing would allow people to live with dignity and respect." –@JamaalBowmanNY pic.twitter.com/pTvhFUo7qv

But I digress. This plan for public housing will be, if passed, a debacle from the start. Why? Because you don’t just toss construction companies at the problem and expect things to go smoothly. Not one federally run construction project has EVER gone smoothly nor has it ever finished on time.

“To qualify for the grants, recipients would have to adhere to strong labor standards, such as protection of collective bargaining and use of American manufacturing and products. The legislation would also fund tenant protection vouchers for displaced residents and create apprenticeship programs for residents.

Read the above again. What this really means is that all construction companies involved in these projects have to be fully 100% unionized, whether a state is right-to-work or not. Furthermore, the legislation won’t allow general contractors or their sub-contractors to outsource any of the work, the only way they CAN do that is to bring those people on as full employees. Isn’t that …job discrimination?

Furthermore, reading the above, you see that those displaced while their abode is getting remodeled, will get first right of refusal once the remodel is complete. Are taxpayers going to have to foot the bill for those residents during the remodel. Yes.

Today, we're reintroducing the Green New Deal for Public Housing because — with millions on the brink of eviction, millions under/unemployed, and with a coming climate crisis — investing in our housing infrastructure has never been more important. https://t.co/boto0GOxyK

Here’s the thing, the return on investment of our tax dollars into this kind of deal is less than zero. Why? Because, as I stated above, not one single federally run program has ever finished on time or on budget. That $172 billion? By year five it would be tripled in cost. Bet me.

Oh but wait! This is supposed to solve the problems of those who live in public housing! What kind of woes?

“The time has now caught up to the legislation, and I’m really thrilled about that,” Ms. Ocasio-Cortez said. “You have a respiratory pandemic that’s layered on communities that are suffering from childhood asthma, that are already dealing with lung issues, that have pre-existing hypertension, which are all indicated by factors of environmental injustice.”

AOC disregards a key issue from these last fourteen months… a freaking Wuhan VIRUS that ensured EVERYONE healthy or not was stuck inside their homes for “two weeks to flatten the curve!”

Does public housing need updated and upgraded? Yes. Should questions be asked as to why places such as New York City have ignored or been slow to respond to these issues? Absolutely. Should places such at Flint, Michigan be fixing the drinking water issues instead of trying to sweep it under the rug and blame everyone else for what they did? Unequivocally.

Supposedly, as was touted by AOC and Bernie back in 2019, fixing public housing will ALSO ensure that each place will become an “islanding microgrid” with the ability to run independently of the regular power grid in case there are outages. Remember, solar and wind energy was SO VERY useful when Texas got hit with that ice storm that shut the state down for over ten days.

This public housing push is phase one from AOC and Bernie. It’s a costly program that will create more problems than it will solve, while gouging taxpayers for every cent we have.

AOC and Bernie need to take their public housing Green New Deal and go sit on a windmill and spin.