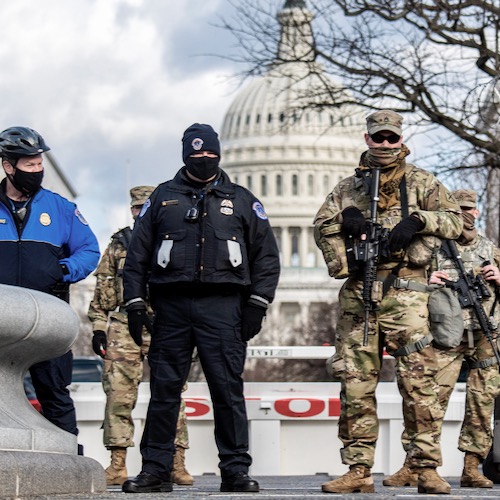 The ruling, released Monday, likely will make it difficult for prosecutors to pursue homicide charges in the officer’s death. Two men are accused of assaulting Sicknick by spraying a powerful chemical irritant at him during the siege.

In an interview with The Washington Post, Francisco J. Diaz, the medical examiner, said the autopsy found no evidence the 42-year-old officer suffered an allergic reaction to chemical irritants, which Diaz said would have caused Sicknick’s throat to quickly seize. Diaz also said there was no evidence of internal or external injuries.”

As the WaPo points out, the medical examiner also infers that the stressful events of January 6th led to his death. So again, the media narrative will continue. What narrative is that? Oh, just the one where the Democrats have firmly stated for weeks now that Brian Sicknick was alternatively bludgeoned with a fire extinguisher or killed by an allergic reaction to pepper spray.

No one would report on the actual cause of his death. His family was radio silent on the matter, likely because they were ordered to stay quiet. Nancy Pelosi grandstanded all over his Capitol funeral, and Biden even parroted the narrative. In February, The NY Times quietly issued a correction about the fire extinguisher, but the damage was done.

Furthermore, the damage continues. Why? Because this is the email from the DC Medical Examiner’s office from THIS afternoon:

“On Wednesday, January 6, 2021, an unprecedented incident of civil insurrection at the United States Capitol resulted in the deaths of five individuals,” the email read. “The District of Columbia Office of the Chief Medical Examiner, Dr. Francisco J. Diaz, MD, FACP, issued determinations on April 7 as to the cause and manner of death for four of those individuals and today issues the cause and manner of death of the remaining individual.” Two men died of heart failure and one woman died of a drug overdose.”

What unmitigated gall. Never mind the true results of those autopsies that show none of the five were directly harmed by any of those who got into the Capitol and left no damage behind. The Democrats of all stripes are going to continue the gaslighting as best they can.

Even the Capitol Police got into the act this afternoon.

Capitol Police responds to the Medical Examiner findings on Sicknick: "The USCP accepts the findings from the Office of the Medical Examiner, but this does not change the fact Officer Brian Sicknick died in the Line of Duty, courageously defending Congress and the Capitol." pic.twitter.com/fgAG9akulN

The media has been continually parroting the narrative so that we would ALL know that the very worst protest/riot/gathering was the one that took place on January 6, 2021. Any other riots and looting from the end of May ’til today? Nothing to see here, move along. Seriously, Nancy Pelosi just went bat for Maxine Waters, even as the presiding judge for the Derek Chauvin trial admitted that Waters rhetoric could be a boon for the defense on appeal.

Glenn Greenwald took the media apart after today’s news broke. As he said here, this is just one way the media was treating this story. However, further on in his rant, Greenwald’s point is made for him.

I'll give an hour amnesty to all the group-think drones in corporate media who smeared everyone expressing doubts about the Sicknick Fire Extinguisher story as a "Sicknick Truther." Come forward voluntarily and honorably confront your latest in-group propaganda.

All the evidence was there from the start that the media lie (which emanated from NYT and then became unquestioned Truth: like the Russia Bounty story) was dubious. But anyone who flagged these was accused of being a pro-insurrectionist fascist, so "journalists" clung to the lie.

These people never gave the slightest shit about Brian Sickick. He was a toy to them: they needed to create a lie about how he died because he was the only one they could claim was killed by pro-Trump protesters. So they invented a harrowing story that was complete bullshit.

Glenn is unequivocally correct here. Why? Because, as you see above and to the additional responses to his thread, his argument that the media firefighters USED Brian Sicknick as their toy to gaslight Americans on the events of January 6th is made in spades. Glenn even provides the receipts here, and here. Among the usual suspects? CNN, the Washington Post, the excrement called The Lincoln Project, Buzzfeed, and more.

Tragically Officer Brian Sicknick had an underlying condition, a blood clot lurking that he likely knew nothing about. Did the Democrats and media care about that? Did they care about his family? Did they care that they were knowingly peddling very false narratives? NO, because that was and IS the plan!

“But the gruesome story of Sicknick’s “murder” was too valuable to allow any questioning. It was weaponized over and over to depict the pro-Trump mob not as just violent but barbaric and murderous, because if Sicknick weren’t murdered by them, then nobody was (without Sicknick, the only ones killed were four pro-Trump supporters: two who died of a heart attack, one from an amphetamine overdose, and the other, Ashli Babbitt, who was shot point blank in the neck by Capitol Police despite being unarmed). So crucial was this fairy tale about Sicknick that it made its way into the official record of President Trump’s impeachment trial in the Senate, and they had Joe Biden himself recite from the script, even as clear facts mounted proving it was untrue.”

That’s right. It was a fairy tale peddled by the Democrat media establishment with all their might. They exploited Brian Sicknick and his service for their own tawdry goals. Too bad the truth finally saw the light of day.

Exit question: When will we find out who shot Ashli Babbitt?