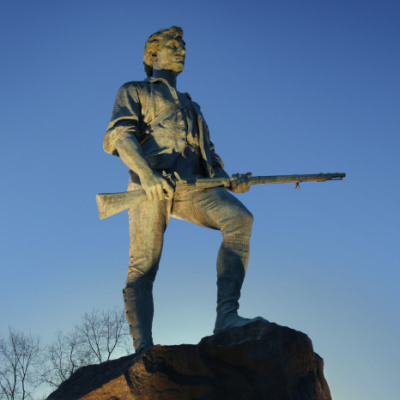 April 19, 2021 is the 246th anniversary of the “shot heard round the world”. It is the beginning of the American War for Independence or the Revolutionary War. It began because of Governor General Gage and his idea that gun confiscation would quell the restlessness of rural colonists. Hmmm, why does that sound familiar?

General Gage sent troops to Lexington to capture Samuel Adams and John Hancock and to Concord to capture the colonials rifles and ammunition. The colonists got word of the plan and decided to hang one lantern in the Old North Church if the British were coming by land and two if by sea. Four men and one woman made late night rides, alerting the early Americans of what dangers lay ahead. They were Paul Revere, Samuel Prescott, Israel Bissell, William Dawes, and Sybil Ludington.

The next day, the colonists said, “Confiscate guns, bitches? Try it.” Well, maybe not those exact words, but the militia (minutemen) were ready. From History.com:

At dawn on April 19, some 700 British troops arrived in Lexington and came upon 77 militiamen gathered on the town green. A British major yelled, “Throw down your arms! Ye villains, ye rebels.” The heavily outnumbered militiamen had just been ordered by their commander to disperse when a shot rang out. To this day, no one knows which side fired first. Several British volleys were subsequently unleashed before order could be restored. When the smoke cleared, eight militiamen lay dead and nine were wounded, while only one Redcoat was injured.

The British then continued into Concord to search for arms, not realizing that the vast majority had already been relocated. They decided to burn what little they found, and the fire got slightly out of control. Hundreds of militiamen occupying the high ground outside of Concord incorrectly thought the whole town would be torched. The militiamen hustled to Concord’s North Bridge, which was being defended by a contingent of British soldiers. The British fired first but fell back when the colonists returned the volley. This was the “shot heard ‘round the world” later immortalized by poet Ralph Waldo Emerson. (Emerson was not the only artist moved to depict the battle; painter Amos Doolittle, known as “The Revere of Connecticut,” created four celebrated engravings of the Battles of Lexington and Concord.)

The Boston Massacre, the Boston Tea Party and the “shot heard round the world” all led to Thomas Jefferson writing about a “long train of abuses” in the Declaration of Independence.

On this Patriots Day, the anniversary of Lexington and Concord, remember that the Second Amendment is not about hunting. The Second Amendment is about having the weaponry to guard against a “long train of abuses”. Be aware of anyone who says “common sense” regarding your right to keep and bear arms.