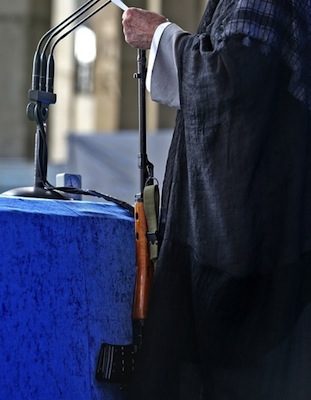 This morning, Governor John Kasich of Ohio announced that he, too, is running for the Republican nomination for president.

“I am here to ask you for your prayers, your support, your efforts because I have decided to run for president of the United States,” said Kasich, a two-term governor who also spent 18 years in Congress.

The 63-year-old Kasich became the 16th GOP candidate — and perhaps not the last — when he declared his candidacy at the Ohio State University.

Kasich has spent a long time in both state and national politics, as well as being a news pundit for Fox News. While he may have the political savvy to run a good campaign and an effective presidency, there are obstacles in his way.

First, excitement and attention. I can’t say that there is a large groundswell of popular feeling for Kasich outside of Ohio. And as far as attention, so long as Donald Trump is busy sucking the air out of the room, few Republicans are going to get any coverage, much less favorable coverage, in comparison.

The former congressman is considered a relatively moderate Republican with an impressive resume and executive experience, and his home state of Ohio is a perennial key to his party’s success in a presidential general election.

But his late entry to the race could be a challenge. At least at this point, he is polling in the low single digits, still without sufficient support to be eligible for FOX News’ first Republican primary debate in less than three weeks.

Kasich is probably the last expected serious contender to announce his candidacy. The problem is, we are still a year away from a convention, and even more than that from the general election, but the first major debate is less than a month away and will only take the top 10 candidates. There will be six candidates who are left out, and it will probably be the first “culling of the herd,” so to speak. It would be hard to imagine that one of those six would be able to gain enough popular momentum to rise in the polls after the debate. Not impossible, but definitely difficult. Can Kasich crack the top 10 in less than a month to make the first debate? It’s questionable at best.

Whoever thought that the GOP would actually have SIXTEEN declared candidates at this stage of the election season? The next few weeks leading up to the first debate are going to be very interesting.