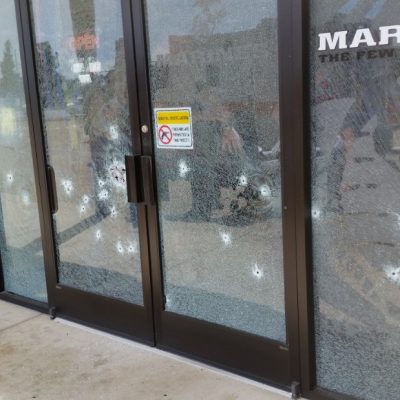 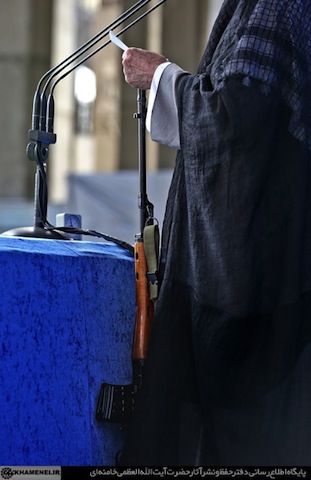 It was an eventful day at the United Nations yesterday as the U.N Security Council voted to give Iran everything they want. 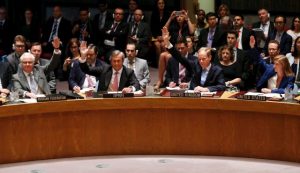 It’s glaringly apparent that not only is our current Administration in the tank for Iran; the 15 member U.N. Security Council is as well. Why else would they have voted unanimously to approve this crappy deal? Yes, all 15 members voted AYE. Folks, we are in for quite a ride, and its not going to be pretty.

Everyone who sat at that so-called negotiating table for months has ignored the fact that Tehran has its own agenda and peace is NOT on the list.  Think I’m wrong? In an address to Iranians this last Saturday, Iranian Supreme Leader Ayatollah Ali Khamenei vowed to continue his opposition to the U.S, and stated that nothing has or will change, deal or no deal.

He backed his words up with a certain prop he carried front and center during his speech. 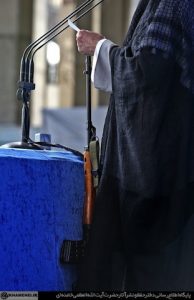 In fact, Iranian TV made SURE to point it out for everyone to see. However, as we now know, the world media let that little gem slide. By the way, lets ignore Khamenei’s words as well. I mean, a speech like his doesn’t carry much weight does it? After all, he only made statements like this:

He also praised Iranian demonstrators who a week before chanted “Death to Israel” and “Death to the U.S.” during protests marking the pro-Palestinian Al Quds Day commemoration.

The ayatollah said that the slogans “Death to Israel” and “Death to America” would continue to be heard in Iran.

John Kerry could muster just barely enough indignation to say Khamenei’s speech was “very disturbing.” Wow. Ok. Meanwhile the Iranian Ambassador to the U.N. took his boss’s words to heart and lashed out at Ambassador Samantha Power right after the Security Council vote:

“The country that invaded two countries in our region and created favorable grounds for the growth of terrorism and extremism is not well placed to raise such accusations against my country,” Iranian U.N. Ambassador Gholamali Khoshroo said, calling past U.S. actions in the region “feckless” and “reckless.”

We are supposed to ignore Khamenei’s threats because THAT is who Obama wants us to crawl into bed with! Thanks but NO thanks. In order to ensure that doesn’t happen, we need Congress to stand up for the United States, vote NO on this deal, and hold Obama’s feet to the fire on this. Will they? They absolutely should. However, claiming in a press release that this is a “bad start for a bad deal” isn’t quite the strong statement or action that America needs. Yes, Speaker Boehner, I’m looking at you. The sales job Kerry and others are doing gets a D in my book, especially since they will have to backtrack every statement they made on the weekend news shows and issue new corrected supposedly more factual ones over the next few days.

So much of the WH's sales job on #IranDeal boils "we were just too weak to do any better…" https://t.co/PsvYQoXWrm

Exactly. Senator Marco Rubio (R-FL), who is running for President used the term “capitulation Monday” when describing yesterday’s vote. You know he’s right. Especially since we’ve a President who wants a legacy so badly that he’ll play footsie with one of the biggest terror sponsors in the world. In fact, anyone want to bet that Iran was doing handsprings when Abdulazeez shot 5 Marines to death in Chattanooga?

The White House is on the defensive because they know this deal should’ve been halted long before we got to this point. However, they are now doubling down on their “marketing” strategy of putting the UN first, Congress a distant second, and America dead last. How? By dumping hashtags in favor of a real Twitter handle that debuted late this morning:

@TheIranDeal can't "obtain" them but okay to build their own. #AmIRite @JohnKerry ?

Congress has less than 60 days to get some teeth in their backbone (or even FIND their backbone) and reject the Iran deal 100%. If they don’t, then they will be as much to blame for enabling a feckless, reckless, dangerous Administration in its effort to drive our country in a full tilt run off the cliff.