Next post
Christopher Wray: The FBI Has Regrets About FISA "Errors And Omissions" 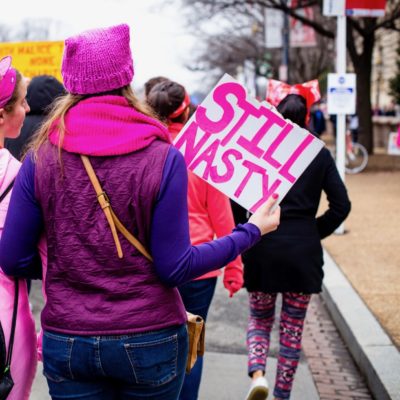 Forget the pink pussy hats-those were so 2017. The new trend amongst feminists? Flash mobs, like this one outside of the courthouse where Harvey Weinstein’s trial began this week:

The People of The State of New York against Harvey Weinstein criminal trial has begun. And while opening statements are not scheduled to occur until January 22, the side show has begun as well. These women have taken a cue from their counterparts in Chile. These women outside of the courthouse in New York City performed their own adaptation of Chile’s original “Un violador en tu camino” or, “A Rapist In Your Path“. Some of the words to the chant go something like this:

The New York City Feminist Flash Mob had their own spin:

And yes, of course, they blamed the President! (You didn’t think Trump would get off that easy, did you?)

The story behind Chile’s Feminist flash mob? We’re talking oppressive government. Femicide. Women raped, stabbed, shot and left for dead by men. Some of these femicides were committed by men they were close to. Their assailants were husbands, boyfriends, exes. Chile’s systemic machismo has gotten women and children killed. There were no names in lights, stars on the Hollywood Walk of Fame and movie deals promised to any of these women. These women did not whine about equal pay to their male counterparts to the tune of a couple of million dollars a year and how life was unfair to them because they couldn’t buy the Bentley and had to go for the Benz. But alas, our American feminist counterparts are outside of the courthouse mimicking this routine during the high-profile Weinstein trial.

The chant was poignant and got the attention of the world when the women of Chile united. But honestly, it seems a bit watered down for women to think this is an effective strategy here in the U.S. Don’t get me wrong. I am not condoning anything that scumbag Harvey Weinstein has done. He’s a sick prick and honestly, I do not care that he needs the assistance of a walker to get himself out of a limo and inside of a courtroom. Whether he needs it or it is simply a sympathy decoy planted there by his defense, I hope he takes it to prison with him. I hope “Bubba” shows him a few new ways to use it, too. I hope he spends the rest of his life there in that hell. This jerk-wad still reeks of self-importance and clearly has no respect for women or the law. He has illustrated this by using his cell phone when the judge clearly indicated to him that the use of his mobile device was not permitted. He knows he’s above it. Truth be told, he’ll probably never meet “Bubba”. He knows he’ll go to a glorified “country club prison” to do his time if convicted. He knows some jurors may be sympathetic towards him because he looks worn-out and like the slob his is and really, there will be no REAL consequences imposed upon him for his lewd actions.

But I digress here. The fact that women in this country are equating sexually violent crimes and homicides against women in other countries to what happens on the casting room couch in an office in Los Angeles shows how out-of-touch modern-day feminists in our nation are. A flash mob is not going to convict Harvey Weinstein. Again, I am not condoning or attempting to be unsympathetic towards anyone who has experienced this in the entertainment field. It’s wrong. Weinstein is a pig. Hollywood is loaded with them. But sexual exploitation in Hollywood has been going on since the beginning of the film industry. And, truth be told, many of the high-profile starlets who came out in support of these women who were assaulted by Weinstein did so after YEARS of knowing this was happening and turning the other cheek. The women in THEIR communities knew and could have done something but they did not lift a manicured finger. In fact, some of them did not come out until it was politically advantageous in our country to do so. They did not speak out on this while it was happening. To some, this would have been career suicide and being the selfish, vapid individuals they are (they’ll claim they were too focused on their careers or too afraid to open their mouths), they stood by and did NOTHING until it was beneficial for them and their political counterparts to speak out. Some sisterhood, huh? This vociferation of crimes against women here in the U.S. has done nothing to help our counterparts here and in other parts of the world who suffer from much more and unfathomable oppression. Instead, it has polarized us as Americans politically and ideologically.

Instead of taking to the streets with feminist flash mobs, witty chants and emasculating our men perhaps we, as women, can be silent, strong encouragers of other women. No lights, no cameras. We can start in our communities and work outwards. We can start by coaching our daughters on how to be strong, powerful, intelligent, discerning women and to demand respect. We can start by nurturing our sons, talking to them, demonstrating intelligence, strength and discernment-telling them that while they should respect a woman, there is absolutely nothing wrong with them asking for respect in return or their desire to be MEN. We can teach them both the value of a life-no matter how great or seemingly insignificant. After all, WE brought them into this world. And that’s powerful.

Feminists, look around before you put on your black booty shorts and dance for a flash mob. There may not be any cameras around to record your virtue but I am sure if you look hard enough and walk into that courthouse, you’ll find that struggling single mother. You’ll find women who have escaped the clutches of domestic violence. You’ll find the girl who’s been raped at a young age. Take the faux blinders off and do a scan and take action. Instead of funding large political machines with an agenda that do NOTHING to help these women, donate your time and money to local organizations that do. That’s empowered. That’s courageous. That’s FIERCE. Look beyond your political ideologies for opportunities to help these women, ladies. They’re all around you, I promise.