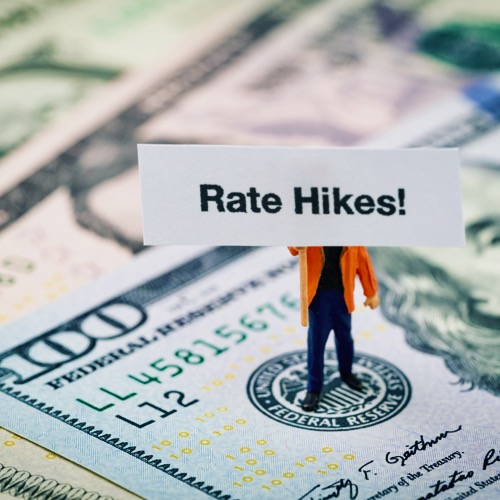 Inflation is on a steep rise, and the Fed’s answer is to skyrocket interest rates. Which leads to those interest rates curtailing ALL economic growth.

A Fed banker admits what we should all should have know from the early ‘80s: The only way to stop consumer-crushing #Bideninflation is w/ a recession costing millions of jobs and so many barely surviving small businesses. @JoeBiden wanted to be FDR. He’s going to be Hoover. @FT pic.twitter.com/UgyiUgCV6Z

The full article, which is hugely concerning for our entire economy and especially those with small businesses along with farmers and ranchers, can be found here. I’d strongly suggest everyone reads the whole thing.

As Bullard notes in the article, core inflation with the exceptions of food and energy came in a wee bit lower. However, what he is advocating is that after the interest rates go up by .5% in May, then a THREE percent increase should and must happen by the third quarter.

Talk about contracting the market! A three percent increase will cause MAJOR ripples across the whole of our economy. An economy that is definitively in trouble for multiple reasons, NONE of which involves Putin!

One: Shutting down the economy during the indefinite ‘two weeks to flatten the curve’ while throwing money at people certainly didn’t help.

Two: Handing students ‘get out of your loan for free’ while saddling taxpayers the debt is another issue

Four: Grocery prices have been on the rise since late spring 2021.

The U.S. Department of Labor said Tuesday that inflation grew to a four-decade high of 8.5% in March from the same month a year ago. Food prices rose 8.8% from last year, with grocery prices increasing 10%.

Our family has certainly noticed the increase in grocery prices. This same time last year a purchase of groceries including milk, cheese, eggs, and fresh veggies cost about $45. Now the same amount averages about $85. Everything related to grocery went up big time.

That’s just grocery prices. That doesn’t include fuel, medicines, the cost of building or remodeling a home, vehicle sales, appliances, and so much more.

Supposedly this is just a blip. An anomaly, a temporary issue.

“It’s a real bump in the road,” he told reporters at the White House. “It does affect families when you walk into a grocery store and you’re paying more for whatever you’re purchasing. It matters to people when you’re paying more for gas, although in some states we’ve got the price down below three bucks a gallon, but the point is it’s not gone down quickly enough. But I think it will.”

We’ve been told that for months now. We’ve also been told that we are supposed to blame either Trump or Putin for the inflation woes we are dealing with.

Well, this “temporary” issue is going to have long term consequences if the Federal Reserve decides to dump a major hike in interest rates on all of us.

We shouldn’t worry though. Biden is SUCH the leader!

If by “lead” you mean unrelentingly and unabashedly destroying buying power of the average consumer/insane cost of living increases across the board/record inflation not seen for decades?!..yeah. He’s Definitely “leading.” https://t.co/2MHvn2pKRU

Yesterday, Joe Biden went to Iowa and pandered to corn growers. He is lifting an EPA restriction on the amount of ethanol a gallon of gas can contain. People who follow the fuel industry and understand the engineering around producing fuel know that ethanol is a terrible additive to fuel. It decreases gas mileage. It’s not as efficient as gas.

Believe me, ethanol as a fuel additive was the WORST thing ever devised as it truly is NOT helpful to fuel efficiency nor gas mileage.

Those in the Federal Reserve and within the Biden Administration are refusing to look at history. We are now really in the midst of the Carter Years 2.0. The problem is, the inflation/economic woes will get substantially worse before they get better unless we get the government to STOP printing money, STOP issuing checks for people to not work, STOP paying off student loan debt, ENCOURAGE oil and gas (pipe dream I know), get out of the way of entrepreneurship and small business regulations, and more.

Want to know why the Biden Administration is full of horseshit regarding inflation being temporary? THIS:

Amazon told sellers on Wednesday that it will be adding a 5 percent fuel and inflation surcharge to American sellers who use their fulfillment services amid rising prices.

Starting on April 28, Amazon told sellers it would be imposing a fee of 5 percent “on top of our current Fulfillment by Amazon (FBA) fulfillment fee per unit rates.”

This is what Biden/Brandon has built in a hot second folks. The blame lays squarely on the Administration and EVERYONE in Congress who are still bloviating instead of stopping this train in its tracks.