Next post
College Loans And The People Who Won't Pay Them 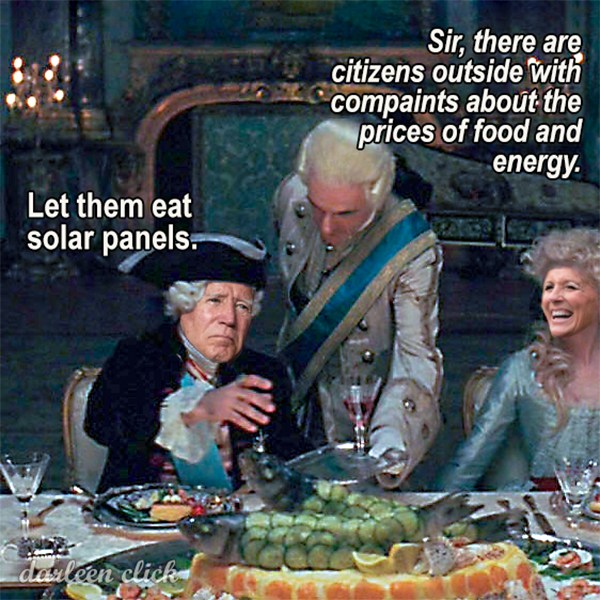 It’s going to take six more weeks to flatten inflation according to Joe Biden. At least that is what he promised during an event yesterday.

At Friday’s event, Biden said his trip overseas showed “the United States is as well or better positioned as any nation in the world to lead the world on the economy in the years ahead.”

He conceded that “it’s going to take time to get inflation back down to normal levels.”

However, he said that “in six short weeks, Americans are going to start to feel the effects of the Inflation Reduction Act,” the massive legislation that he signed in August.

You know what can get inflation flattened? Stop spending money hand over fist on pet projects and industries that have zero return on investment. Stop throwing money at useless witch hunt investigations that fizzle because there’s nothing to find.

Right now, people in the northeast are paying double the amount for heating oil than they did last year. And what is Biden’s response to all this? Let them buy solar panels! That’s the ticket! Stock up on Chef Boyardee and spend money in the dead of winter to buy solar panels that can’t be installed until late spring or early summer, and then get a tax-payer funded rebate the following year! As for those who rent homes, condos, or apartments…I guess they can attempt to force the landlord to install those nifty solar panels, which will lead to a rent increase but you know, it will flatten inflation eventually.

Inflation is hitting people hard. Food banks have seen a significant increase in traffic. Yet the fact that food prices have gone up has hindered food banks from being able to help the new influx. In fact, whether you plan a Thanksgiving meal or not, the cost of food is up 20% from last year.

The cost of a Thanksgiving meal will be the highest ever this November, according to American Farm Bureau’s annual survey. https://t.co/gIjuLgF0xk

This is how much more expensive Thanksgiving food items are compared to last year.

Remember, Biden keeps insisting that the economy is super strong, stupendously strong. So, why the significant increase in people going to food banks? Inflation is a key driver of this whether Biden nor anyone in the Administration cares to admit it or not.

Cost of food is up between 12 and 20% compared to last year. Our economy as a whole is only up around 3%. You tell me, is our economy strong? Nope. It’s hurting.

Yet Biden is now, after insisting everything is peachy keen, telling us we’ll need another six weeks to flatten the inflation curve. Where have we heard that one before?

Furthermore, we CAN and SHOULD blame the out of control Biden Administration for what Americans are dealing with right now in terms of the economy and inflation. Since Biden took office, inflation has gone UP 13%.

That’s ok guys. Just you wait until after January 1st. And then you too can help flatten that inflation curve by putting new windows in your home and installing solar panels! How? By taking advantage of those wonderful tax credits Biden can give you! Up to $3200 in credits for heat pumps, electrical panels, windows and doors. Winning!

Biden tells people concerned about heating their homes this winter that they can get a tax credit to install solar panels on their roofs. pic.twitter.com/MRVPmZTD0N

These are what — here’s what this means: If you’re living in a home with drafty windows and doors, starting January 1, you’ll be able to save up to $1,100 on the cost of replacing them. And that’s just on the upgrade.

You’re also going to save a lot of money going forward because your utility bills will be lower. And that’s good for your wallet, but it’s also good for the environment because you’re using less energy.

And that’s not all. If you want to install solar panels on your roof, you can get a tax credit for 30 percent of the cost. It’ll bring down the cost of installation by about $7,500.

Except who has $10,000 to spend on solar panels and don’t get me started on what the actual costs of new windows are. A $600 rebate for replacing all the windows in one’s home is a useless gesture. And no matter what Biden is attempting to promise, he doesn’t have a clue. Just because seniors will be able to spend less on costly prescriptions doesn’t mean they won’t still be struggling with heating costs and the higher prices at the fuel pump and in the grocery stores.

No matter how Biden is told to spin this, we all know that it will take a helluva lot more than six weeks to flatten the inflation curve.