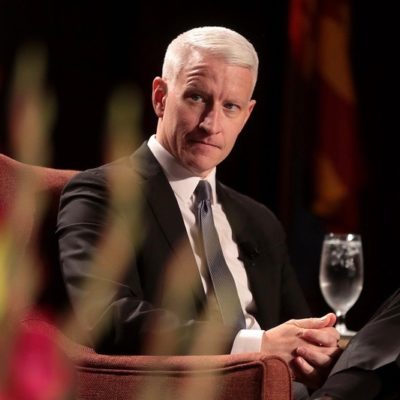 It’s no wonder we do not take the media in general seriously anymore. Look no further than a comment heard across America last night from CNN’s Anderson Cooper.

Not sure if Anderson was jutting his bottom jaw out ever so slightly while saying this. After all, not all of us can be a Vanderbilt and a Ralph Lauren model. Not all of us can live in a mansion in the tawny, sprawling suburban community of Litchfield, Connecticut. Not all of us grew up on the Upper East Side of Manhattan going to prep schools and transitioning to Yale in our college years.

Rumor has it, some individuals were staying at the Grand Hyatt and not the Holiday Inn but why is Anderson Cooper trashing the Holiday Inn? Their morning cinnamon buns kick ass.

My dearest love, day 1 of the revolution was difficult. I was maced. Parking was non-existent. But my comrades have cheered me with dinner at Olive Garden. Oh, and I stayed at a Holiday Inn Express last night. With love #ElizabethFromKnoxville

Anderson Cooper basically equated Olive Garden diners with The People of Wal-Mart. As a fellow New Yorker, my Upper East Side experience was a bit different from Anderson Cooper’s. Lunch usually involved a hot dog from Papaya King on East 86th Street and lusting over items too expensive for my budget from outside of boutique windows. Oftentimes, my dad bypassed the Upper East Side altogether and took me to Patsy’s in Harlem for pizza. This was usually followed by a trip to the corner bakery for Italian ice. Having a grandmother from Calabria and a grandfather from Sicily was enough to make me an Italian food snob. I like Olive Garden. I will say the Olive Garden is not “real” Italian food but I’ve earned that right as a New Yorker and an Italian girl, not Anderson. OG is mainstream-and that is okay. My grandmother made all of her sauces in a cast-iron skillet. We hardly ate marinara at her house. Her Steak-a-Pizzaiola was all olive oil, garlic, red pepper flakes, seasoning and pure heaven. She, however, was hell on wheels!

This contempt for ordinary Americans mostly persisted in changing political environments. During the Great Depression, many liberals became Communists, proclaiming themselves tribunes of a virtuous oppressed proletariat that would have an enlightened rule. For a moment, idealization of the working man, but not the middle-class striver, came into vogue.-The Snobs At The Heart of Liberalism, Michael Barone (The New York Post)

Anderson Cooper’s Olive Garden/Holiday Inn quip was seemingly humorous to some. They’re dying with laughter because this is how they see Americans who oppose them. The Deplorables who live in the Land of The Iceberg Lettuce and hate Arugula. They wear their red baseball caps and display the American Flag proudly when it is something they should be embarrassed of. All of this for a damn flag. Right, Michelle?

Like all of you, I’ve been feeling so many emotions since yesterday. I tried to put my thoughts down here: pic.twitter.com/9xzRvrpk7y

The utter and complete snobbish, elitist BS coming from the likes of Anderson Cooper, his journalistic colleagues and those with the loudest voices and platforms in our country is exactly what has driven some Americans to their boiling point. The sheer bias of a media that has insulted some Americans for almost four years is outright disgusting. Anderson Cooper’s Olive Garden remark was not funny. It was a clue for Americans who are watching-including those Americans who are not on board with those who stormed the Capitol and find their actions treasonous. YOU watching CNN or MSNBC or whichever channel and listening to and agreeing with these smug, aloof and downright disdainful anchors is not enough for them. YOU will never be in their league. They think they are above you and better than you in every, single way. That should bother the average Democrat voter. Instead, some want to be just like them and thumb down their noses at the opposition-rather than trying to figure out what makes them tick. They don’t want their peers thinking they are uneducated, deplorable hillbillies who hate science or something.

Anderson Cooper’s statement also speaks volumes of how out-of-touch with reality he is. In my state, you cannot even walk into an Olive Garden and dine inside on your spaghetti and meatballs. Why? Because Democrat Dictators (whom they love) have shut restaurants down! No, you need those breadsticks to-go or you dine in an outdoor tent, peasants! Olive Gardens across the country are closed, Anderson. Not even a poor, working waitress and single mother of three is in the house to pour the Chanti for the minions. Oh, wait…Anderson Cooper thinks all Americans unlike his rich, Vanderbilt, toffee-nosed, self-importantance drink White Zinfandel. Got it. Roger that.