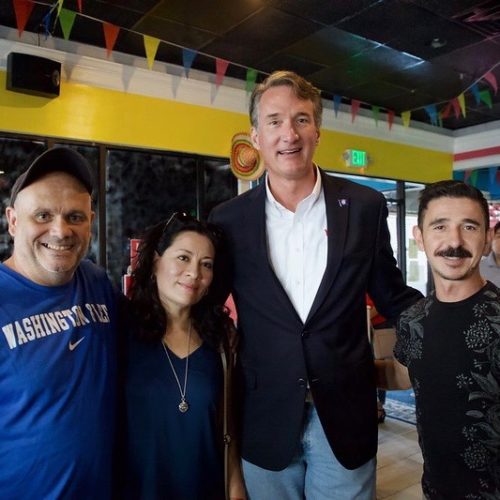 All eyes were on Virginia last night in a nail-biter of an election race. And the liberal media outlets were far from happy.

Joy Reid accused Republicans of being a threat to our national security, in favor of “soft white nationalism”. After all, “education is code for white parents don’t like the idea about teaching about race”, right, Joy?

Man, was MSNBC on a roll last night! Andrea Mitchell chimed in and called Glenn Youngkin a “textbook case of dishonest culture warrior“. Nicolle Wallace all but jumped up and down saying Critical Race Theory was not real and nobody was teaching it. Contrary to the $34,000 Loudoun County in Virginia was shelling out for CRT programs for teachers, Nicolle?

Good news (perhaps?) for MSNBC. Their ratings were probably significantly higher last night with all of the Republicans watching. I admit to enjoying some wine and popcorn while watching the meltdown.

Then, Vann Jones of CNN called Youngkin the “Delta Variant of Trumpism“. The New York Times also called Youngkin a “culture warrior“. Still, Youngkin took a commanding lead in Virginia, while McAuliffe did a little dance and his camp refused to concede.

There were also the comments that came through the Twitterverse last night. And it went late into the night. Even McAuliffe’s good ol’ pal, Joe, did not take his call:

Tomorrow, a reporter should ask Biden how he thinks McAuliffe will do in the Virginia election, just as a test.

Even Geraldo predicted weeks ago that Terry McAuliffe would win the Virginia gubernatorial election because “he’s a political street fighter”…or something. Rivera then went on to call Greg Gutfeld’s claim that progressive agendas, like McAuliffe’s, that led to a girl to get raped at her school were “outrageous“.

Then, there was this. How dare those Republican white people!

Whiteness remains undefeated. Let's wait and see who those white suburban voters went for tonight in Virginia. Any guesses?

Writing a tweet as Republicans elect a Black woman as their Lieutenant Governor in the state of Virginia. Winsome Sears is the first Black woman to win a statewide office in Virginia. Sears was born in Jamaica, is a former USMC veteran, Sears has also sounded off on CRT:

It’s supposedly to help someone who looks like me and I’m sick of it. I’m sick of being used by the Democrats and so are many people who look like me.”-Winsome Sears

That is, the very CRT that supposedly “does not exist” but is being dispensed amongst our educators to creatively incorporate into lessons for our kids who, apparently, do not belong to us. At least that’s what McAuliffe said a few weeks back. If Glenn Youngkin is what Andrea Mitchell calls a “textbook case” of a dishonest culture warrior, what are we calling an administration in power in D.C. that has largely started this culture war? Are we to look to them to be the pinnacles of honesty? They all have been soooo transparent through it all, don’t you think? Still, the Democrats cannot help themselves:

(Sniffle, sniffle. Pass me a violin.) And, they ALWAYS play nice when the other party spreads lies! Hey, Manisha? What planet are you on and how is the weather there?

The issue is, residents of the state of Virginia were tired of playing nice. The well-being of their children was at stake and no parent in their right mind is going to stand for that injustice. What happened in Virginia last night is a textbook illustration of a thing called Karma. A textbook case of a red wave.

Oh, really, Kamala? A textbook illustration of things to come. Better pack your bags, Veep. Yes, Virginia. There is hope around the corner!