Next post
Antifa Better Know The Suburbs Are Armed 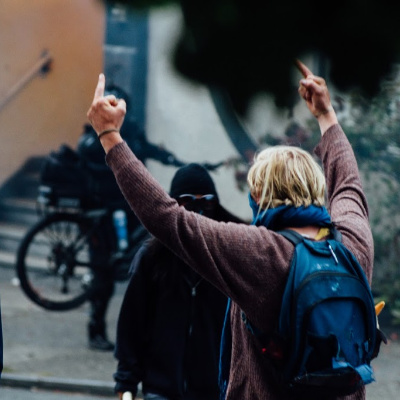 As soon as the video of the police murder of George Floyd went viral, the people of our nation were united as we have not been since September 11, 2001. Then, the peaceful protests broke out in horrible violence. Police stations and businesses destroyed, fires set. People lost their livelihoods and life’s savings. Who is responsible for the violence?

The marches began on a righteous note. If you watched the video or read about the police murder of George Floyd, you felt rage at the callous indifference displayed, not just by the animal who knelt on the neck of Mr. Floyd, but by the other police officers who did nothing. They did nothing! I have met some really bad cops in my life. I have also interacted with some very good ones. I have never suspected that any of them could do what the cops did to Mr. Floyd. Or, in the no-knock warrant, police murder of Breonna Taylor. The marches were righteous and justified.

The marches quickly devolved into violence, destruction and looting. Victory Girls’ Kim wrote about how the marches became riots and George Floyd was forgotten.

Where is the violence coming from now? Neil MacFarquhar of the failing New York Times asked this question in his article, “Many Claim Extremists Are Sparking Protest Violence. But Which Extremists?”. He wrote:

Numerous political leaders, starting with President Trump, have leveled accusations at various groups, asserting that some radical agenda is at play in transforming once peaceful protests over the death of George Floyd in Minneapolis police custody.

“We have reason to believe that bad actors continue to infiltrate the rightful protests of George Floyd’s murder, which is why we are extending the curfew by one day,” Gov. Tim Walz of Minnesota tweeted on Sunday, after previously suggesting that white supremacists or people from outside the state fomented the unrest.

While President Trump was in Florida celebrating our triumphant return to space, he spoke about “antifa” and the anarchists who he believes are behind the violence:

Mr. MacFarquhar does not believe that antifa is involved because they don’t have world headquarters and member cards:

Antifa is not an organization, and it does not have a leader, membership roles or any defined, centralized structure. It is a vaguely defined movement of people who share common protest tactics and targets.

More important, even if antifa were a real organization, the laws that permit the federal government to deem entities terrorists and impose sanctions on them are limited to foreign groups. There is no domestic terrorism law despite periodic proposals to create one.

In his article, MacFarquhar admits that there is something going on:

“The truth is, nobody really knows,” Keith Ellison, Minnesota’s attorney general and a former Democratic congressman from Minneapolis, said on NBC’s “Meet the Press.”

“There’s been a lot of videotape taken by demonstrators of people who are very suspicious, who really did start breaking windows,” Mr. Ellison said. “There have been other photographs of cars with no license plates. Very suspicious behavior.”

You don’t have to watch the nightly riots for long before it becomes clear that there are malefactors agitating the crowds. The reporters on the ground at the riots talk about how the crowds in front are used as human shields as bricks, M80’s and other items are thrown from the back. Fox News’ Lawrence Jones wrote a great post about this:

“Just by my experience of reporting on protests and being in the thick of Baltimore, Ferguson, that the bad actors were people that weren’t from the area,” Jones said. “This wasn’t something that I just made up. It’s just a matter of experience and being there on the ground.

“And as you know, the [Minneapolis] mayor and the [Minnesota] governor, after records are starting to come out, they told us that all the people that they arrested were people from out of state. That’s what’s going on right now. You have people that have their own agenda that are anarchists, that are part of Antifa, that are professional paid protesters.

It is a fact that 86% of those arrested had local addresses. That means that 14% of those arrested were not from the area. This tells me two things. (1) It doesn’t take a huge percentage to wreak violence on a community. (2) The groups behind the violence are more organized, with bike scouts and the like, than your average protester.

What if, stay with me here, this is one of the greatest intersectionality moves in the history of intersectionality. The Social Justice Warriors think they can do intersectionality? Bah! Antifa has been getting away with violence for a decade because of the weak Western states governments. They have practice at this. White supremacists would love to see this country torn apart, although they don’t have enough gas to power a moped. The more radical parts of Black Lives Matters would love to see a war. And, Occupy Wall Street has been looking to find relevance again. And, let’s not forget the criminals set free so they wouldn’t catch Covid-19. They are out there too. I think that people who don’t see this as a possibility don’t have any imagination.

We need to stand together or we will surely hang separately. I apologize to Ben Franklin for that. But, it is true. We must stand together. We are one people and one nation. “We must learn to live together as brothers, or we will perish together as fools.(Martin Luther King, Jr) Remember George Floyd and Breonna Taylor.