Next post
Did Anyone Wear A White Hat In Uvalde? 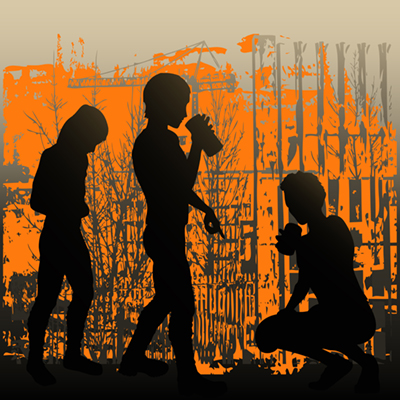 Prior to the internet, tabloids stacked in the grocery store were the source of all manner of lurid and fanciful stories. Mermen, flying saucers and even children caught in forests who had been raised by “wild animals”. But it doesn’t take a jungle to raise a feral child, just a Leftist.

The latest viral video is of a young child clad only in diapers, trying to punch a law officer in rage while using obscene language.

It really shouldn’t shock as the Left has been trying to undo civilization for decades and creating berserkers in their pet minority communities is a feature, not a bug.

When Minneapolis police officers showed up in St. Paul last week to execute a search warrant for a murder suspect, they were met by toddlers — some still in diapers — who punched, kicked, cursed, and threw rocks at them. (Alpha News is only publishing 30 seconds of the video, but it goes on for another two minutes.)

The behavior of these children is eerily similar to the behaviors of rioters who burned and looted Minneapolis two years ago.

Isn’t it though? And not just riots, arson and looting. But the smash and grab invasion style robberies we see in stores across the nation, now so ubiquitous it is destroying businesses in Democrat-controlled cities across the nation. From Walgreens and CVS closings in major city centers like San Francisco to the latest announced closures from Starbucks.

Starbucks Corp. said Monday that it is closing 16 U.S. stores after workers reported incidents related to drug use and other disruptions in cafes.
Starbucks said it would permanently close six stores each in the Seattle and Los Angeles areas, two in Portland, Ore., and single locations in Philadelphia and Washington, D.C. by the end of the month. (snip)

U.S. operations leads Debbie Stroud and Denise Nelson in a message to U.S. employees Monday. “We cannot serve as partners if we don’t first feel safe at work,” they said, referring to the company’s term for employees.

…isn’t being committed because someone is desperate for food or formula or diapers. That is criminal, feral behavior, and no one should be excusing it or tolerating it. But even acting in self-defense against violent thugs will be punished if the thug is the protected color …

A clerk for a New York City bodega was charged with killing a man who attacked him behind the counter, but those who support him say that new surveillance video showing the shocking incident could help the worker be cleared of charges.

What happened that a 35 year old man not only garners a long rap sheet as a career criminal but feels it permissible to assault a 61 year old man over a bag of chips? What happened that children as young as ten years old were out roaming the streets at 3 am and brutally murdered an elderly person? For kicks?

What happened? Decades of anti-American, anti-Judeo-Christian Leftism dedicated to destroying functional families and creating minority shock troops to bully and cow the normies into accepting their authoritarianism.

That the prisons are filled with males (and an increasing percentage of females) who were never actually raised, but left to their own devices in dysfunctional homes – illiterate, irreligious, nihilistic and filled with the toxic self-esteem of entitlement – should make one recognize the obvious pattern here, but NOOOOOO … Prisons are white supremacy and are filled with the real victims of The [White] Man.

It is not hard to find Ivy League educated people of all melanin levels engaging in the most reprehensible of racist language and behavior against people of pallor and denouncing normative principles of civilization as mere whiteness that must be eradicated. Even august institutions like the Smithsonian has engaged in this Make Black People Feral movement.

Let’s be real here. If you had just arrived in this country knowing nothing of its history but observing how one group of people were systematically depriving the individuals of another of the tools of self-responsibility, self-control, delayed gratification, respect for consent and authority, you would be properly alarmed that the first group was actively destroying the second. And wondering at what dark motives were at work.

As we’ve posited before, the contemporary Left is the most race-obsessed pseudo-ideology since Nazism. And the best way to co-opt the race you hate is to destroy the group from within by making the members unable to function in the rest of society while keeping the seething mob close to your chest by telling them it’s not their fault and offering them trinkets and bribes, like sugarcubes to horses.

And never think that the Elite Black Upper Class — from Maxine Waters to Professor D-L “Kill Whitey” Stewart — are unaware of this stealth pogrom against communities they ostensibly champion. As Juliette Akinyi Ochieng writes:

There is a certain segment of the black American population — an elite — that looks down on the majority of blacks and believes that the world would be better off without them. Not too many non-blacks know this.

This elite has existed for a long time and what they think about the vast majority of blacks would make a Klansman blush.

To be fair, the elite Leftists of pallor believe the same thing about large segments of white people, too. Their eliminationist rhetoric against people in flyover country, MAGA hats, Walmart shoppers, and Republicans or Conservatives in general is relentless. Even a Latina woman declaring her own values with something as innocuous as the phrase “God, family, country” has the Left labeling her as a dangerous radical.

The handwaverium the Left does at the black-on-black carnage in Chicago and other Democrat-controlled cities akin to spectators at a cockfight. Savage is just part of the nature of these not-real-people so let us use them and be entertained.

That toddler who can scream “shut the f*** up” while trying to attack law enforcement will, without immediate intervention, more than likely grow into a young adult who will kill or be killed on the streets of a Leftwing controlled city.

And the people who made him will high-five in private and gather his bloody shirt to demand more power.