Next post
Obama Administration Bails On Testifying About OPM Hack 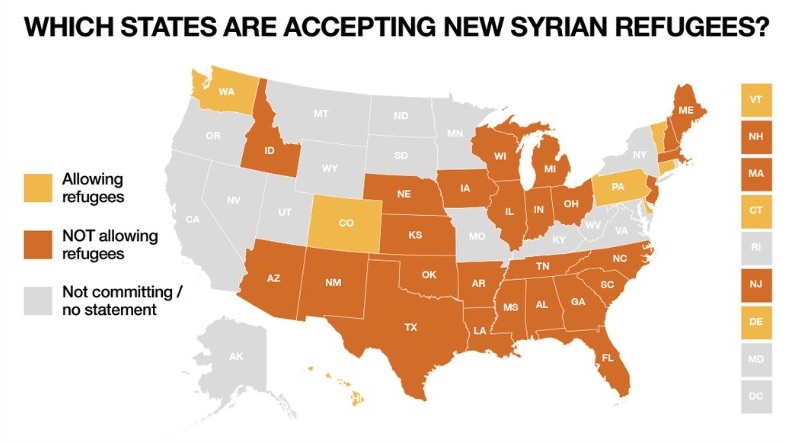 On the heels of the Paris attack just days ago, Daesh has vowed to attack the United States in a similarly horrific fashion. And we should take them at their word, because in just the past couple of weeks, they’re reportedly responsible for downing a Russian jetliner filled with hundreds of innocents, and succeeded in attacking France, with at least one terrorist who entered the country by posing as a “refugee.” In response, the number of governors refusing Barack Obama’s planned import of tens of thousands of Syrian “refugees” has grown to twenty-six as of last evening. And naturally, the accusations of xenophobia have begun from the usual suspects:

I bet you if the #SyrianRefugees were from Europe, this wouldn't be an issue.

Of course, CAIR is verklempt :

The Council on American-Islamic Relations said Monday, “Defeating ISIS involves projecting American ideals to the world. Governors who reject those fleeing war and persecution abandon our ideals and instead project our fears to the world.”

Apparently “Sly Fox,” “Chase LeSane,” and CAIR, whom some view as a terrorist organization, must have missed this little fact:

I will not stand complicit to a policy that places the citizens of Alabama in harm’s way. We refuse Syrian refugees. https://t.co/HTpflJUiPc

Here's The UPDATED List Of Governors Who Will NOT Take Refugees Into Their States https://t.co/YxRTFrCUXa

We can expect that list to expand as constituent pressure grows. Still, there is a sticking point. And for an administration that selectively wields its constitutional powers, it could prove to be a wrench:

Rick Scott [of Florida] said “it is our understanding that the state does not have the authority to prevent the federal government from funding the relocation of these Syrian refugees to Florida even without state support.”

Instead, Scott said Congress ought “to take immediate and aggressive action to prevent President Obama and his administration from using any federal tax dollars to fund the relocation of up to 425 Syrian refugees” to Florida.

Luckily, it seems the forceful requests are being heeded, because a handful of House Republicans are moving to halt the refugee program in its tracks:

Following the deadly terrorist attacks in Paris, House Republicans are proposing to block federal funding for resettling Syrian refugees until a series of new conditions are met, Foreign Policy has learned…

The draft legislation, a copy of which was obtained by FP, is backed by Reps. Brian Babin, Lou Barletta, Diane Black, Mo Brooks, Jeff Duncan, John Duncan, Blake Farenthold, Louie Gohmert, Frank Guinta, Gregg Harper, Walter Jones, Steve King, Mike Pompeo, Mark Meadows, and Bill Posey. It would prevent funding for the resettlement of refugees from the Middle East and North Africa until authorities adopt “processes to ensure that refugee and related programs are not able to be co-opted by would-be terrorists.” Once those processes are in place, details of the security checks must be given to Congress in both classified and public forums, and the administration must establish a “longer-term monitoring process” to track refugees in the U.S….

In a Monday letter to President Barack Obama, McCaul called on the White House to immediately “suspend” the admission of all additional Syrian refugees.

“The high-threat environment demands that we move forward with greater caution in order to protect the American people and to prevent terrorists from reaching our shores,” McCaul wrote.

Sounds reasonable to me. But then again, this is Barack Obama we’re talking about. And when has he ever been reasonable? Thankfully, there’s James Comey. And when the FBI director tells us that this administration does not have a robust vetting process for Syrian refugees, many of whom can offer nothing by way of proving who they are, we should listen to him:

Meanwhile, presidential candidate, Chris Christie, weighed in on the lack of refugee vetting, and echoed the widespread distrust the Obama Administration has earned in the past seven years:

Governor Chris Christie told radio host Hugh Hewitt, “I do not trust this administration to effectively vet the people who are proposed to be coming in, in order to protect the safety and security of the American people, so I would not permit them in.”

It’s clear as day that Barack Obama has precisely zero intention of upholding his oath of office to keep our nation safe, importing potential Islamic Jihad at the altar of political correctness and appeasement. Here’s hoping these 26+ governors, and our congressional representatives, can halt this ludicrous policy. For the Head in the Sand club: It’s not about xenophobia; it’s about the security of our nation.

UPDATE [9:30 am PT]: Fox News reports the number of governors opposed to allowing Syrian refugees into their states grows to 30.