Previous post
SpaceX Takes Off For The Final Frontier

Next post
Riots Across America: No Longer About George Floyd 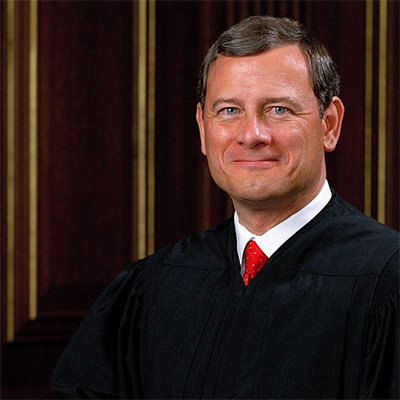 SCOTUS Chief Justice Roberts has taken the role formerly held by former Justice Anthony Kennedy — finding a way to “nuance” his support for the port side of SCOTUS when dealing with Constitutional issues. The latest is yesterday’s late decision to deny an injunction against CA Gov. Newsom’s orders to severely limit free religious exercise as guaranteed by the First Amendment.

The Supreme Court issued a rare late-night ruling on Friday against a California church challenging their state’s stay-at-home order.

In a 5-4 vote, Chief Justice John Roberts broke from other conservative justices to rule in favor of the state.

Roberts issued the denial, while Justice Kavanaugh wrote the dissenting opinion. Both are in this brief 6-page document.

What was the bone of contention for plaintiffs in this case? Were churches asking to be exempt from the lockdown rules?

Not at all. With very few exceptions, churches (temples, mosques) in California have adhered to the lockdown rules with little pushback from the beginning of Newsom’s emergency orders in mid-March. Worshippers have been streaming services and holding small group gatherings via meeting applications like Zoom. Even as it has become clear that the “science” used to support the draconian house-arrest has not been reliable, it was a combination of unreasonable extensions of the Peking Pox lockdown and irrational phases for reopening that spurred the plaintiffs to seek an injunction.

Briefly, when the state, even in an emergency situation, interferes in the free exercise of religion it must 1) have a compelling interest 2) it must not treat religious services differently than comparable secular gatherings.

The plaintiffs argument was that Newsom’s order was discriminatory because they were being held to a stricter standard for reopening to in-person worship than similarly situated secular businesses.

It must be understood, that the plaintiffs in this case not only abided by the earliest lockdown, even though they had concerns about “streaming services only” as not all people have internet access, but such cooperation with the state lead to a decision not to join in earlier legal challenges to Newsom’s executive fiat. This challenge came with Newsom’s “phased” reopening plans and his bigoted stance against worship where Newsom has determined that workplaces are worth the risk of reopening in phase 2, but not worship. Per Newsom, the reward of allowing people to pray together should be regulated to phase 3 along with nail salons and movie theaters.

California published the Reopening Plan online and described Stage 2 as “lower-risk workplaces” and Stage 3 as “higher risk workplaces.” 3ER560–61. However, when asked at a press conference why schools are considered “lower-risk” and churches are considered “higher risk,” Governor Newsom explained that the Reopening Plan balanced risk with reward—i.e., it prioritized services considered more important to California. 3ER512. But Governor Newsom is not only prioritizing life-saving businesses, or even schools. He is prioritizing all manufacturing and warehousing—so long as they practice social distancing. In other words, Governor Newsom is criminalizing the exact same type of gatherings, but only if motivated by religious belief.

Justice Roberts and the leftwing of SCOTUS disagreed. Roberts tersely worded explanation is the strict limitations on church service (e.g. 25% capacity or 100 worshippers which ever is fewer people) vs the 50% capacity of restaurants for dine-in services are because Roberts, et al, have decided that churches are …

Although California’s guidelines place restrictions on places of worship, those restrictions appear consistent with the Free Exercise Clause of the First Amendment. Similar or more severe restrictions apply to comparable secular gatherings, including lectures, concerts, movie showings, spectator sports, and theatrical performances, where large groups of people gather in close proximity for extended periods of time. And the Order exempts or treats more leniently only dissimilar activities, such as operating grocery stores, banks, and laundromats, in which people neither congregate in large groups nor remain in close proximity for extended periods.

Say, what? Roberts ignores Newsom’s own risk/reward statement and workplace v church comparison? In other words, Roberts believes that the approximately 1-2 hour of worship 1-day-a-week should be regulated more harshly than a workplace of 8-9 hour workday 5-days-a-week.

I would add that Robert’s contention, too, that grocery shoppers do not “congregate in large groups nor remain in close proximity for extended periods” betrays a lack of direct experience.

Would someone volunteer to take Roberts on a field trip to their local Costco, Walmart or Home Depot?

What should also be of concern is that in denying the injunction, SCOTUS is lessening strict scrutiny of suspension of First Amendment rights when the state can claim an emergency. SCOTUS isn’t asking for defendants to offer up any evidence to support their designation that worshipping presents a great risk to the public than going to work or shopping at the mall. No, according to Roberts, any broad decisions done in the name of public health are not to be second-guessed by the judiciary.

History shows that much of Judeo-Christian worship in this country has declined over the last fifty-sixty years. Academia has certainly grown hostile to American churches and synagogues. Whether it is because of disinterest or active malice, leftwing elected officials have shown a willingness to use the Peking Pox as an excuse to suppress worship.