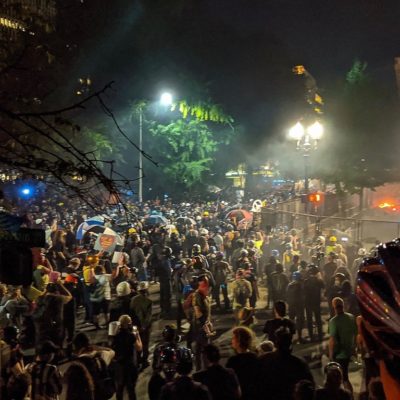 In a turn of events that unfolded after the US Marshals’ shooting of a Portland Antifa member in Lacey, Washington yesterday, we’re hearing the news come in piece by piece. He claimed self-defense. He was “fighting a war”. Antifa calls him a “great man”. The “great man” who shot a Trump supporter, Michael Reinoehl.

Because all “great men like to shoot Trump supporters, right? From Vice:

You know, lots of lawyers suggest that I shouldn’t even be saying anything, but I feel it’s important that the world at least gets a little bit of what’s really going on,” Reinoehl said. “I had no choice. I mean, I, I had a choice. I could have sat there and watched them kill a friend of mine of color. But I wasn’t going to do that.”-Michael Reinoehl

He had no choice but to choose to shoot someone. Okay. Reinoehl has described himself as “100% ANTIFA,” and suggested the tactics of counter-protesters amounted to “warfare.”

Multnomah County District Attorney Mike Schmidt said Portland police searched Reinoehl’s home and found ammunition of the same caliber used in the fatal shooting and clothes that matched what Reinoehl was wearing on the night of the incident. There’s also this:

The criminal complaint against antifa shooter Michael Reinoehl has been released. It shows stills from a security camera which catches the last moments of Jay Danielson’s life. It shows Reinoehl turned into a parking garage to ready his gun. https://t.co/5BGp1qFTNk pic.twitter.com/q5bHqJxg0Y

What they’ve done is they’ve tried to make it look like we’re all terrorists. And they’re trying to make me look like a murderer.”-Michael Reinoehl

Perhaps because you were, Mr. Reinoehl? But that does not stop Antifa or the media groups who support him, who sympathize with his plight for justice, attempting to paint him as an upstanding citizen. He was just seeing the injustice of the world we live in and wanting to fight in this war against said injustice. Where is Rolling Stone when we need them? Dzhokhar Tsarnaev graced their cover as the poor, misunderstood young man in 2013. Michael Reinoehl, warrior of injustice, 100% Antifa, should be a shoe-in for next month’s cover.

The narrative continues with comments from Reinoehl’s estranged sister, who prefers to not be named. Can’t say I blame her.

I’m worried about his kids. I’m still in shock. I’m overwhelmed by this and what this means to the country at large. I’m sad that this whole thing happened.”

The tracking down of Reinoehl — a dangerous fugitive, admitted Antifa member, and suspected murderer — is a significant accomplishment in the ongoing effort to restore law and order to Portland and other cities. The streets of our cities are safer with this violent agitator removed, and the actions that led to his location are an unmistakable demonstration that the United States will be governed by law, not violent mobs.”-Attorney General William P. Barr

Now, to apprehend the accomplices in this crime. While Reinoehl’s sister urges peace and rational discussion, Antifa members will applaud his “courage”, CNN will mention that he leaves behind two kids and Facebook removes Patriot Prayer while openly Marxist groups are free to spread their ideologies and opinions-all while the rioting continues.

Graffiti in support of antifa shooter Michael Reinoehl has gone up in Portland. This is outside the police building that was attacked last night. pic.twitter.com/0lni3VMP69

The media will continue to place emphasis on the death of a “right wing” protestor in last week’s Portland shooting. But Michael Forest Reinoehl? He got shot by law enforcement and pronounced dead at the scene. He was partying it up at Mayor Ted’s condo last weekend, innocently standing by in his Teva sandals whilst wearing a tactical vest and stashing a firearm. He killed a “right wing” protestor whom he thought was going to knife his friend (even though Aaron J. Danielson did not have a knife). This is a man who has been arrested for skirmishes in downtown Portland before and wanted on a failure to appear warrant stemming from a speeding car chase that he participated in with his 17 year-old son and 11 year-old daughter. When stopped, law enforcement found a Glock without a concealed permit, marijuana and various “unidentified prescription pills“. Where’s the “Father of the Year” Award? An upstanding man of principle, indeed. As the days go by, look for “shot by law enforcement” and “the father of two” to drive the narrative of Reinoehl’s death. There will be outfits other than Vice painting this man into a martyr. Seeker of justice, Reinoehl was “going to war” in Portlandia, strapping on his his Tevas, packing his Glock.

I was confident that I did not hit anyone innocent. And I made my exit.”-Michael Reinoehl

Fun fact: The U.S. Marshals were also confident that they also did not hit anyone innocent.