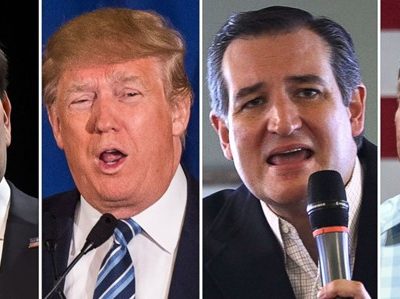 Next post
The Trump Campaign Finally Broke Their Silence on the Assault of Michelle Fields, and It's Full of Lies

The web is buzzing about the horrifying battery of Michelle Fields by Trump campaign manager Corey Lewandowski. Fields has appeared on Fox News, and was hired by Breitbart last year. Normally, Fields covered the Cruz campaign, but she filled in one day for a Trump reporter that was out sick. She attended a Trump rally in Jupiter, Florida. In her own words, Trump was walking around talking to reporters. Fields went to ask him a question about affirmative action, and once she did, someone grabbed her by the arm — hard enough to leave her arm bruised a day later — and yanked her backwards, hard enough that she almost fell to the ground. Ben Terris, a reporter for The Washington Post, immediately identified the attacker: Corey Lewandowski. Fields watched as Trump and Lewandowski left the building together. Trump evidently had no concern whatsoever for the female reporter that his campaign manager had just attacked. This kind of behavior apparently does not bother him (which explains the constant violence breaking out at his rallies). And that this happened at a Trump rally, at this point, doesn’t surprise many people. But the response from Breitbart has left many people asking why they aren’t siding with their reporter after she was victimized by Trump’s campaign manager, issuing nothing more than a weak statement that even calls Fields’ account into question.

“It’s obviously unacceptable that someone crossed a line and made physical contact with our reporter,” said the Breitbart statement, issued under the name of Larry Solov, the outlet’s CEO and president. “What Michelle has told us directly is that someone ‘grabbed her arm’ and while she did not see who it was, Ben Terris of The Washington Post told her that it was Corey Lewandowski. If that’s the case, Corey owes Michelle an immediate apology.”

The statement was issued in the wee hours of Wednesday morning but remains Breitbart’s official comment on the matter, hours after sources said Lewandowski acknowledged to Breitbart’s Washington political editor, Matthew Boyle, that he did manhandle Fields.

Lewandowski’s explanation to Boyle, said these sources, was that he and Fields had never met before and that he didn’t recognize her as a Breitbart reporter, instead mistaking her for an adversarial member of the mainstream media. Trump’s press secretary, Hope Hicks, didn’t respond to an email seeking comment. Nor did the usually responsive Boyle.

The Breitbart statement struck sources within Breitbart and outside the company as strangely inadequate, given that it blames an unidentified “someone,” uses the conditional phrase “if that’s the case,” and leaves open the possibility that Lewandowski didn’t lay hands on Fields.

An additional wrinkle is that Politico, for one, didn’t identify Terris as Fields’s witness, at his request, because the Washington Post reporter had arranged informally to meet with Lewandowski on Wednesday for a Style section story and planned to confront the campaign manager about Tuesday night’s incident.

Hours after the Breitbart statement identified Terris, the Trump campaign informed him that his interview with Lewandowski would not take place, blaming a scheduling conflict—leaving several colleagues to believe that Breitbart had essentially given the Trump campaign manager a heads up on Terris’s intention.

Fields—who sources say was instructed by Breitbart’s PR consultant, Kurt Bardella, not to speak to other journalists about the incident, though Bardella claims otherwise—declined to comment for this story. Thursday morning, however, Breitbart posted her brief account of the incident.

“Why the hell isn’t Breitbart standing up strongly for their reporter?” demanded a journalist covering the Trump campaign, who spoke on condition of anonymity so as not to antagonize Trump operatives and hamper the reporting process. “Why the hell did they need somebody else’s name? Why do they say ‘if it happened’? And why aren’t they allowing her to talk about it at all?”

The journalist continued: “Because they like Trump. And Trump is more important to them than their own people. There’s something weird about that.”

People have begun calling Breitbart “Trumpbart” because of their highly biased reporting in favor of Donald Trump. And judging by how Trumpbart has handled this situation, it’s a nickname that’s very well deserved. Notice in the official statement from Solov, they refer to Lewandowski as “Corey”. Lewandowski assaulted one of their reporters, yet they still are apparently on a first-name basis with him. And apparently, if it hadn’t been for the tweets sent out by Fields’ boyfriend, Daily Caller reporter Jamie Weinstein, Trumpbart likely wouldn’t have raised the issue at all:

Say what you will abt Bush or even Obama. They would never tolerate this type of thuggery toward women https://t.co/EfbQH6tFM7

After those tweets, Trumpbart didn’t react in horror over the treatment of one of their reporters. No, instead they sicced Bardella on Fields, who told her that she needed to “get your boyfriend under control”.

Ben Shapiro, the editor-at-large, finally bothered to say something about the assault on Fields… but he did it on Twitter, not on Trumpbart. And he also took his sweet time doing it, waiting until today — two days later — to say anything.

Everyone should be calling for Lewandowski's firing over his battery on Michelle. Everyone. EVERYONE.

No excuse for not calling for Lewandowski's firing. None. https://t.co/p8Zyp6jfgl pic.twitter.com/Ezebot6AbH

Lewandowski, remember, is the same guy who tried to threaten @megynkelly to get her booted from the second Fox debate.

WOW: Trump campaign's alleged excuse for assaulting a journalist? "We thought she was a *bad* journalist." pic.twitter.com/A53zbVi4ew

It's approaching noon Eastern. Anybody not calling for Lewandowski's firing over his battery on @MichelleFields…your agenda is obvious.

Maybe Shapiro should take those sentiments to Trumpbart, where they’re apparently not shared. Nope, instead, Trumpbart wanted this entire thing to be hushed up, and why? Whose side were they on? It wasn’t Fields’ side. They were more concerned about protecting Donald Trump than they were about defending their reporter, violently attacked not by some low-level campaign aide, but Trump’s campaign manager. It should be their top news right now. They should be loudly demanding that Lewandowski is fired. They should be demanding an answer from Trump himself as to why this behavior was allowed. After all, there is constant violence at Trump rallies, so it apparently is acceptable to Trump. He’s the one calling for his supporters to beat up protesters and saying he’ll pay their court fees if they do. His campaign manager is physically attacking female reporters for being on the “wrong” side. And while they released a weak statement, apparently the message behind the scenes is that Fields is a liar:

Was sent this screen grab of a Breitbart reporters tweets that appear to have been deleted pic.twitter.com/LGuYqrQwmW

We may not have video of Lewandowski attacking Fields, but attacks on reporters aren’t exactly unheard of at Trump rallies. Remember the attack on a TIME reporter at a Trump rally? Trumpbart should remember that — they covered it.

The idea of Trump becoming president is more terrifying by the day. Trump is talking about wanting to be able to sue journalists for printing stories he doesn’t like, and in the meantime, has his people physically assaulting reporters who they think are on the “wrong” side. And media outlets like Trumpbart are helping him do it, by defending Trump no matter what, even at the expense of their own reporter.

Andrew Breitbart must be rolling over in his grave right now.