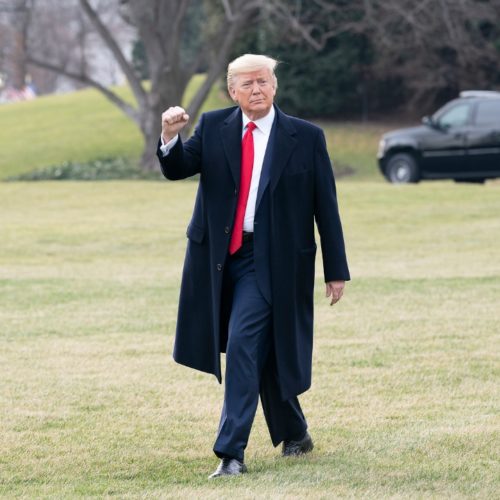 The 47th annual Washington D.C. March For Life is happening today, and for the first time, a sitting president addressed the crowd in person.

The pro-life presidents of the past have usually either pre-taped a video message, called in, or sent over remarks to be read. In the last couple of years, Vice-President Pence has shown up at the March For Life, and has introduced video messages by President Trump. However, the president announced on Wednesday that he would be there himself.

Predictably, the left flipped its lid over this announcement. It’s the two things they can’t stand, merged together – Donald Trump as president, and the pro-life movement.

Having the president show up to the March For Life meant there would be increased security, of course. There was a single entrance point to the rally, complete with metal detector and bag searches, and the stage was constructed with a clear bulletproof shield around the speaker’s podium. President Trump was the first main speaker, and was introduced by pre-recorded video message by Vice-President Pence. The president’s motorcade arrived right after the video message. Many pro-life leaders joined him on the platform, including Alveda King.

President Trump delivered a message that emphasized this year’s theme of “Pro-Life is Pro-Woman” and added his support for American families along with praise for those who lead the pro-life movement.

“It is my profound honor to be the first president in history to attend the March for Life,” Trump told the crowd in Washington. “Unborn children have never had a stronger defender in the White House. … Every life brings love into this world. Every child brings joy to a family. Every person is worth protecting.”

The president also panned Democrats’ stances on abortion as “extreme” and went out of his way to thank the “tens of thousands of high school and college students who took long bus rides to be here in our nation’s capital.”

“When it comes to abortion, Democrats … have embraced the most radical and extreme positions taken and seen in this country for years and decades and you could even say for centuries,” Trump said, accusing many of supporting “taxpayer-funded abortion all the way up until the moment of birth.”

President Trump spoke for just under 15 minutes, but his appearance and support for the March For Life surely should draw mainstream media eyes toward this rally that they love to loathe. Right?

CNN did end up giving President Trump a little coverage after the fact.

However, Twitter “accidentally” marked a pro-life video by the Trump campaign by covering it up with the “sensitive material” warning. When called out, Twitter said it was an “error” and promised to fix it. How convenient.

We see it in the eyes of every new mother who cradles an innocent newborn child in her loving arms:

Life is the greatest miracle of all.

Many in the pro-life movement were justifiably concerned about President Trump when he was first elected. Things he said during the campaign were often contradictory, though he did say that he was pro-life. However, actions speak louder than words, and his actions have backed up his words. President Trump has become, in word and deed, the most pro-life president since the movement began.