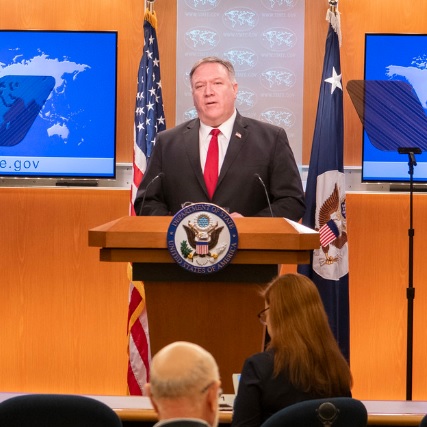 Secretary of State Mike Pompeo was not in the mood this morning to sugar-coat China’s role in the plague they unleashed upon us all.

During an interview on ABC’s “This Week,” Pompeo stated that the Wuhan lab is the likely epicenter of this whole disaster, though it seems that he is leaning toward the explanation that the virus was caused by a mutation of whatever was being researched inside, and then carried out to the general public. Pompeo, however, won’t say whether he thinks the virus getting out was accidental or intentional.

“I can tell you that there is a significant amount of evidence that this came from that laboratory in Wuhan,” Pompeo said on ABC’s “This Week.” “These are not the first times that we’ve had a world exposed to viruses as a result of failures in a Chinese lab.”

Pompeo stopped short of saying the virus was man-made, noting that he agreed with a report by the Office of the Director of National Intelligence that ruled out genetic modification or it having been man-made.”

“I’ve seen what the intelligence community has said,” said Pompeo. “I have no reason to believe that they’ve got it wrong.” Pompeo declined to say whether the Chinese intentionally released the virus. “I don’t have anything to say about that,” he said.”

Pompeo might have refused to speculate on how the virus got out, but he was unequivocal in who is to blame.

Pompeo told ABC’s “This Week” that the Communist Party of China engaged in a “classic Communist disinformation effort” by silencing medical professionals and removing reporters to limit the spread of information on the virus. He said these moves “created enormous risk” and harmed hundreds of thousands of people worldwide.”

“We can confirm that the Chinese Communist Party did all that it could to make sure that the world didn’t learn in a timely fashion about what was taking place,” he said.”

China, with the WHO running interference for them, threatened doctors who tried to sound the alarm, covered up the impending disaster in a manner similar to the Soviets at Chernobyl, destroyed the information that they did have, and have continued to cover up the number of deaths within China while changing their own narrative to blame the United States. The Trump administration has upset the media by sticking to this point, and good for them, because it needs to be remembered. Also, the media owes Senator Tom Cotton some actual apologies after screaming that he was some kind of wild-eyed conspiracy theorist when he suggested the Wuhan lab could be at fault.

While the Trump administration ponders ways to hold China accountable for (if not the release of the virus) the cover-up that surely turned an epidemic into a pandemic, we should get creative. While it would be satisfying to hold China financially responsible for what has happened, why not strike a blow at their prestige instead?

Seems like one small way we could push back against China is a boycott of the 2022 Winter Olympics. Why should a country that puts Muslims in camps, undermines rights in HK and obfuscates its failures in the coronavirus crisis get to host the Olympics? https://t.co/SkleKhRwgV

It’s not the worst idea I’ve ever heard. We have boycotted the Olympic games before, and while some athletes would undoubtedly go on to compete under just the Olympic flag, or for other countries that will allow them to compete under their flag, it would definitely send a message. Hoping that the International Olympic Committee would just move the 2022 Winter Olympics is about as likely as the World Health Organization apologizing to Taiwan for not listening to them and then allowing them to join the group. Neither group’s leadership possesses enough backbone to actually stand up to China. This is something we are going to have to do ourselves.

Secretary of State Pompeo is exactly right to keep the finger of blame for covering up the facts about the virus pointed squarely at the communist Chinese government. And even though we may never get the truth about how the virus got out, we cannot let them get away with their propaganda campaign.