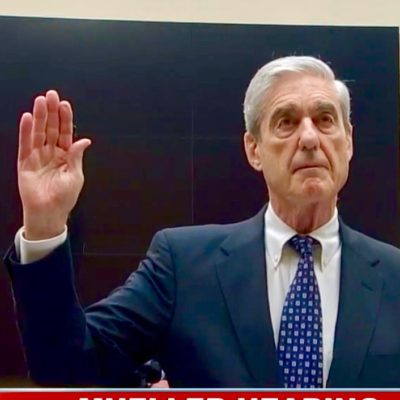 The Mueller Hearings began with the House Judiciary Committee this morning. The hearings are both painful to watch and pure comedy platinum. Victory Girls’ Nina wrote a post this morning on Robert Mueller’s claim that he is unaware of Fusion GPS or Glen Simpson. Read it right here. I just want to make a few observations on this goat rodeo.

I am of two minds on the appearance and mien of Mr. Mueller.

I kind of feel sorry for this poor, doddering, senile old man. These people need to stop picking on Robert Mueller. I just know that his bipedal emotional support animal/deputy Aaron Zebley is holding his hand under the table. At any moment, I expect him to say “Who am I and why am I here?” just as the late Admiral Stockdale did when he was debating Al Gore and Dan Quayle as Ross Perot’s V.P. candidate way back in 1992. It’s time to let Mueller go back to the home. He is missing apple sauce and story time.

Or, I kind of feel sorry for Robert Mueller. He is being held hostage. Deputy Aaron Zebley is holding a gun on Mueller under the table. At any moment, I expect Mr. Mueller to begin blinking “torture” in Morse Code, the way valiant Navy Aviator Jeremiah Denton did while being held in the Hanoi Hilton as a prisoner of war. 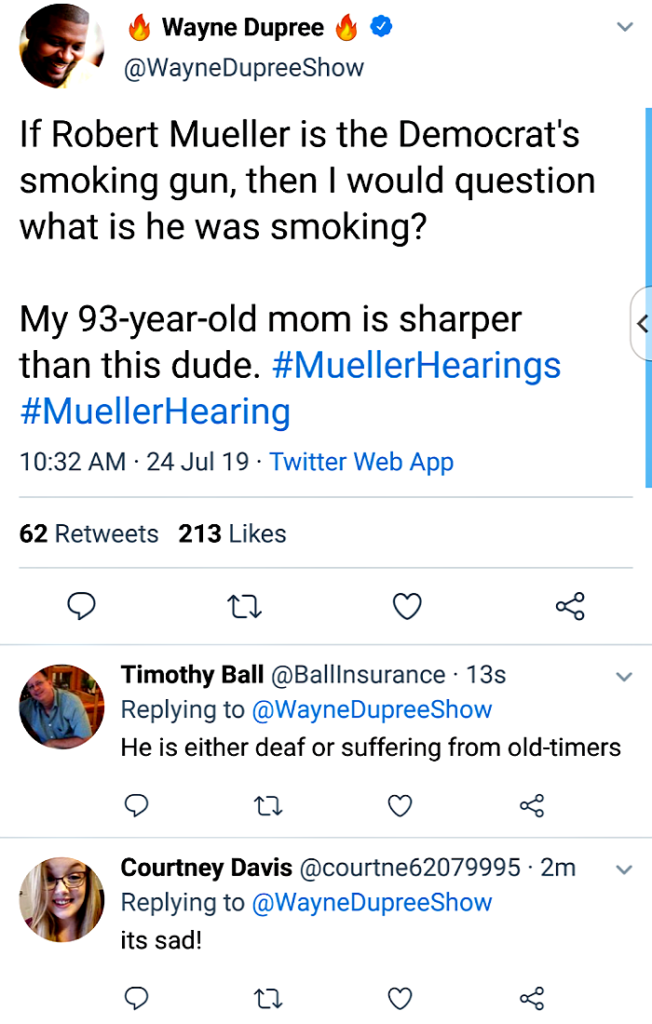 The Democrats’ strategy for the Mueller Hearings is very clear. Mr. Mueller is a decorated Vietnam Veteran and his ethics may never be questioned. At least half of the Democrats and one Republican have noted Mueller’s service as a Marine, beginning with Chairman Jerrold Nadler. The Washington Post reported:

“Your career … is a model of responsibility,” Nadler told Mueller, listing his accomplishments as a decorated Marine officer who received a Purple Heart and the Bronze Star while fighting the Vietnam, then led the FBI following the Sept. 11, 2001 terrorist attack.

May not question his ethics, got it.

Watch Nadler give his opening statement and is there a more unlikeable human being on the planet than Chairman Nadler?

The Democrats are pounding obstruction of justice and the fact that “no one is above the law”. Jesus take the wheel! The Democrats stay on message. They are far more disciplined than the clown car full of Republicans on the Judiciary Committee. Maybe the Republicans should have gotten together and had dress rehearsals the way the Dems did. Despite all their tries, the Democrats could not get Mueller to say that President Donald Trump obstructed justice. Per The Washington Post again:

Mueller was careful not to be drawn into a statement that Trump committed obstruction of justice. Rep. Hakeem Jeffries (D-N.Y.), questioned Mueller about the elements of an obstructive act under criminal law, in an apparent effort to get Mueller to agree with the congressman’s own analysis that Trump had done so, particularly when he tried to get Mueller fired.

Mueller agreed that Trump understood he was being investigated, and that he viewed the special counsel’s inquiry as detrimental to his interests. But he wouldn’t sign onto Jeffries’s conclusions that Trump had engaged in all the conduct that one must to be charged with obstruction.

“I don’t subscribe to the way you analyzed that,” Mueller said at the end of Jeffries’s questioning. “I’m not saying it’s out of the ballpark,” he added. “But I’m not supportive of that analytical charge.”

And, the loser is Hakeem Jeffries.

That Time When President Trump Said He Was F**ked

Several nimrods/Congressweenies brought up the fact that on May 13, 2017 when President Trump found out that a Special Counsel had been appointed to investigate his campaign for Russian Collusion, he said the following:

[W]hen Sessions told the president that a Special Counsel had been appointed, the President slumped back in his chair and said, “Oh my God. This is terrible. This is the end of my Presidency. I’m fucked.”

The Democrats are using this comment as a consciousness of guilt thing. You have got to trust me on this. If I knew that I hadn’t colluded with anyone outside of my campaign and that the full might and power of the Federal government was gonna be turned on me, I would say “Fuck” at least twenty times. Plus remember that Senator Chuck Schumer threatened Trump with the intelligence community already.

If I were that nasty piece of work, Adam Schiff, I would cancel this afternoon’s House Intelligence Committee session of the Mueller Hearings. It’s not going to get any better.