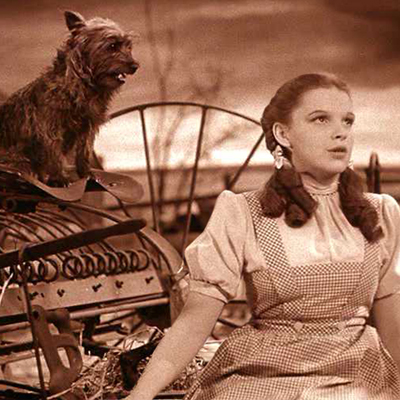 by Kim Hirsch in politics 16 Comments

Aaron Coleman is a 19-year-old dishwasher from Kansas City, KS, which lies across the Missouri River from its bigger brother, Kansas City, MO. While KCK is lower-income, and about 50% white and 50% black/Hispanic, the district Coleman would represent is majority white and middle income. But all of the city shares one commonality: it’s solidly Democratic. Any Democrat from KCK who runs for the KS legislature is usually a shoo-in.

But Coleman is carrying the kind of baggage that should be toxic to a budding political career. Because when he was in middle school, Coleman obtained a nude picture of a girl, and then threatened to forward it if she didn’t send more of the same. She didn’t comply, so he followed through with his blackmail threat.

“And when I didn’t send him more, he sent it to everyone I knew. I don’t know how he got the picture. All I know is he’s an awful person and he should not be allowed to run for anything.”

In sixth grade, he also cyberbullied another girl, calling her a “whale,” complete with expletives.

“I was just in disbelief that another man that doesn’t respect women is in power, calling me fat, telling me to kill myself, like I’m never going to find anyone, like I’m worthless, just downgrading me every day.”

Coleman did issue a mea culpa, but excused these stunts as “the actions of a sick and troubled 14-yo boy.” As for the girl who nearly committed suicide, Coleman implied that she should just get over it.

“I’ve moved on. They call the past the past for a reason, because that’s where you are supposed to leave things.”

But Aaron Coleman hasn’t moved on from his own childhood problems. In fact, he claims to be a victim himself of an elementary school that “locked him in a closet” in “solitary confinement” for three years. As a result, he insists he’s “damaged neurologically.” “I’m lucky to be alive, and I don’t want any child to suffer as I did,” he states. He also claims he received a PTSD diagnosis when he was 15.

However, the superintendent for Coleman’s KS school district rejects these claims. Coleman’s school “does not put kids in closets,” he said.

Yet Aaron Coleman has made outrageous statements recently, too. Last month he hoped a former GOP KS House rep who criticized mask usage would die of COVID, writing in a Facebook post:

“John, I’m going to laugh and giggle when you get COVID and die. At least we can say you died doing what you love. Ask your buddy Herman Cain how it worked out for him.”

Accompanying that Facebook post was a picture of Jesus in a sexually suggestive pose with the text “Don’t wear a mask so we can be together forever.”

He apologized for that, too — probably because he got caught.

But there’s more about “Aaron Coleman for KS” than these egregious stunts. His platform is pure radical leftist.

Coleman’s Facebook campaign page shows his support for Black Lives Matter, Bernie Sanders, and LGBTQ causes. He also wants to raise the minimum wage and thinks that if you want schools to reopen, you’re also someone who excuses school shootings. Or something like that. 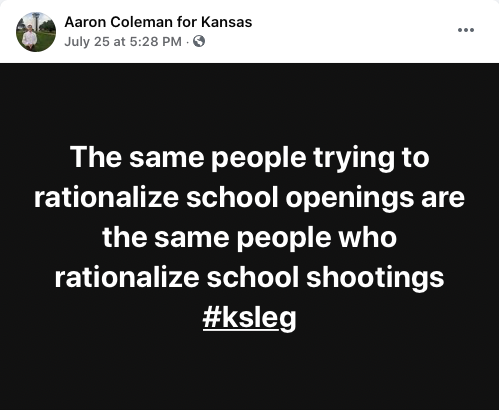 The KS Democratic Party — because it’s Kansas and not, say, Portland — looks at Aaron Coleman with horror. The Kansas City Star editorial board wants Coleman to withdraw from the race. KS Gov. Laura Kelly, a Democrat, says he’s “not fit to serve in the Legislature.” And Jacques Barber, Wyandotte County Democratic Chair, said the party should accept him but “try to counsel him and give him as much guidance as we can.” Good luck with that.

Finally, current Rep. Stan Frownfelter, whom Coleman defeated in the August 4 Democratic primary, is staging a Hail Mary write-in campaign to keep Coleman away from Topeka.

Frownfelter said in an interview:

“The voters in our community didn’t have a full understanding of my opponent, or the kind of person he really is.”

The radical Left doesn’t confine itself just to the West Coast anymore. It’s not just violent anarchists in Portland or kooks on the Seattle city council. They’re now running for office in the Heartland. So while Republicans are dealing with QAnon candidates, Dems need to own their party’s problem children, too. Their nod-and-wink attitude towards socialism and disruption have brought this on. But most importantly, however, voters really need to pay attention to just who is running to represent them.

Toto, I don’t think this is Kansas anymore.

Update: Aaaand. . . he’s out! Aaron Coleman withdrew from the race on Sunday, claiming he wants to “focus on taking care of my family & surviving the COVID Great Depression,” since he says his father is in the hospital. But in Kansas it’s not so easy to remove your name from a ballot — the nominee or the nominee’s family must be experiencing severe medical problems, or has moved from the state, or died. Now Coleman has to file a petition with the secretary of state by September 1. The KS Secretary of State is Scott Schwab, a conservative pro-life Republican, so life could get even more interesting for Aaron Coleman.

Update Numero Dos: He’s baaaack! Coleman now says he’ll remain on the ballot, as of August 25. My guess is that he found out he can’t get off the ballot, due to Kansas’s stringent ballot rules. But he says he wants to fight “corporatists.” Power to the people, or something.

Good luck, KS Democrats. You own this putz. Enjoy.