The Butler opened in theaters late last week and currently holds the number one position at the box office. But at least one rebellious theater owner is having none of it. Elizabethtown, Kentucky theater owner and Korean War veteran, Ike Boutwell, is refusing to show the film in his theater citing Jane Fonda, who plays the role of Nancy Reagan, as the reason. Since opening Movie Palace and Showtime Cinemas Boutwell has not, as long as he can remember, allowed any Jane Fonda film in his theaters. He considers her a traitor.

“I trained hundreds of pilots to fly, many of whom Ms. Fonda clapped and cheered as they were shot down,” Boutwell, a former Marine said of the pilots he trained to fly in Vietnam. “To add to this, I just really think it’s a slap in the face to have a person of treason portray a patriotic lady, Mrs. Reagan,” he said. “I just think that is throwing gas on the fire. In life, you’ve got to stand for something, and that’s where I stand,” Boutwell said. “It makes me feel that I’m honoring those who died for this country.”

As anyone who knows America’s recent history is aware, Jane Fonda willingly gave aid and comfort, the definition of treason, to the North Vietnamese military during the Vietnam War. She sided with Communists, called for the destruction of our American forces, and harmed our troops with her vile propaganda. Because of this, many Conservatives have called for boycotting the film. Fonda, while claiming she’s sorry and insisting she’s asked for forgiveness for her treasonous acts against our soldiers in Vietnam, seems anything but. This is what she chose to wear during a recent promotional interview for the film:

Does she look contrite? For what reason did she feel it necessary to drag up her heinous past? To heartlessly poke vets in the eye? To shamelessly sell tickets? No, it’s even more nefarious than either of those.

In a statement to The Hollywood Reporter she callously said, with the same blatant disregard she showed all those decades ago, “If it creates hoopla, it will cause more people to see the movie… I figured it would tweak the [R]ight. Who cares?”

Who cares?! Does she sound apologetic? Does she think her potential audience consists only of Leftists and Communist sympathizers like herself?

Decades after the fact, Jane Fonda continues to disparage veterans and those who support them, throwing her absolute, unrepentant treason against our American forces in Vietnam in their faces, into the face of every American citizen, every chance she gets, telling veterans who still hold understandable anger toward her to “get a life.” Is it any wonder a Korean War veteran would refuse to show her film in his theater? Her “hoopla” creation may have very well backfired. And rightly so.

And then there’s Oprah Winfrey.

IF the story she related while promoting the film is accurate—the shop owner disputes it—Oprah’s behavior begs the question: Rejecting any other possible explanation, like plain ol’ garden variety snobbery, is not immediately assuming a white woman is displaying racism because she refuses to show a black woman an expensive item racism itself? I don’t see the difference. What if the shopkeeper had been black and refused to show Winfrey the handbag? Would that be racism? Or would she have offered some other, less controversial, less exploitative explanation, one that wouldn’t help push people into theaters? Would she have mentioned the story at all? Many of us have at least one time in our lives been targeted in a store as a potential shoplifter. That is not racism. So I am disappointed in Winfrey’s apparent attempt at race division, intentional or otherwise. She’s done much good for humanity. Jumping on to the race-baiting gravy train belongs to race pimps masquerading as “civil rights leaders” like Jesse Jackson, not otherwise reputable Americans like herself. Sadly, it seems Winfrey has shown her true colors, and they’re various shades of green.

Between the likes of Hanoi Jane Fonda playing Nancy Reagan, one of the most beloved, iconic women in America’s history, to Oprah Winfrey yanking out the race card to promote her film, I refuse to spend my time, nor my hard-earned money, watching either of them bastardize our country for profit, no matter how good the film might be. While Mrs. Reagan may or may not have forgiven Ms. Fonda I, like Mr. Boutwell, have not, nor will I ever, offer mine. What little class and contrition Ms. Fonda possesses would fit loosely into a tiny pocket inside Ms. Winfrey’s $41,000 handbag.

I like Ike. He’s got chutzpah. But don’t get me started on the newest Secretary of State. 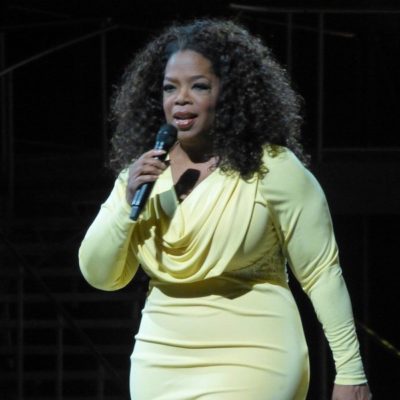