Next post
Did Lockdowns Contribute To Buffalo Shooter's Choices? 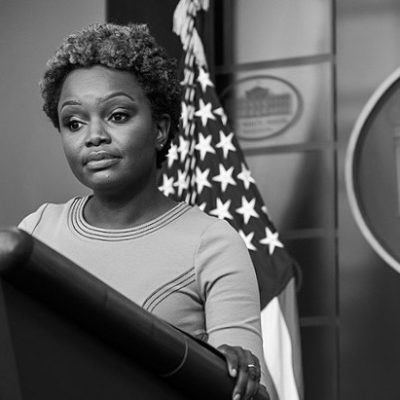 We have not heard many whispers of the new installment of Karine Jean-Pierre as the new White House Press Secretary. Karine has been playing it cool and quiet. Here is Jen Psaki bringing her into the fold:

Bringing truth to their jobs (cough). Creating a drama-free workplace (cough). Sure, Jen. But in reality, while Karine Jean-Pierre has been easing into her role, Jen, the queen of the circle-back, may be tame when compared to the likes of Karine. In fact, Karine Jean-Pierre has a long journalistic history of blaming racism for, well, just about everything.

In truth, Donald Trump lived rent free inside of Jean-Pierre’s triggered “journalistic” brain throughout the duration of his Presidency and beyond. Never once did Karine mention the old fool and racist who is sitting in the White House right now. (“If you’re black and did not vote for me than you ain’t black”, right, Joe?) But then again, that would be kicking the old gift-horse (who is really a jackass) in the mouth considering where her paycheck comes from. Best to be mum on that.

Thank you! We will not endorse his racist, bigoted, sexist, xenophobic campaign. Bye-bye @realDonaldTrump https://t.co/A5RQHXXYpg

It doesn’t? It certainly seems as though it does, Karine. The stripes harken back to the Democrats, way back when. Say 1865? The KKK? (Go ahead, smug-nosed, mouth-breathing fact-checker, tell us it was a lie). And, we won’t even throw out Planned Parenthood here into this mix. Oh hell, who am I kidding? Of course we will. Human weeds to be plucked? Margaret Sanger was a full-blown racist and socialist but my-oh-my, how the tables have turned! She wasn’t so bad, so they say. The black community stopped making excuses (while still making excuses) for her. White people who want black children to be born and have a chance are the true racists, the true oppressors, though. Roger that.

And what of Karine’s views on Critical Race Theory (CRT)? If we’re playing football, I’ll punt.

Republicans are lying. They are not being honest. They are not being truthful about where we stand. They are cynically trying to use our kids as a political football. They’re talking about our kids when it is election season but they won’t vote for them when it matters.”-Karine Jean-Pierre’s comments on the Virginia gubernatorial election

From the Democrats who have been completely honest and forthcoming when it comes to what our kids are taught in our schools that we fund via taxpayer dollars. True story here. My teenage son sat in his medical careers class the other day to listen to a black psychiatrist talk to his in-person class via ZOOM about how some people don’t want “white male doctors” because there are “too many of those”. They want black doctors, trans doctors and it is important that the medical landscape is “diversified”. No mention of Indian doctors or Asian doctors, though. In the car on the way to practice, he seemed a bit discouraged and floored by the remarks. He said, “If my therapist was a black woman, and I asked for a ‘white, male therapist’, wouldn’t that be racist?” We know the logical answer to this but in the circles of CRT, my white, middle-class teenage boy would be seen as a bigot and a racist for even entertaining this argument. Our schools are, in fact, teaching that this type of racism is okay and completely validated. Now, my kid is pretty level-headed and sees things for what they are. He sees this agenda coming into play and he’s not playing. Some teenagers are not this way. Stoking the flames of racial tensions in the name of CRT seems like a great way to build our future generations, no? Karine Jean-Pierre is in favor of this line of thinking.

Seriously, Karine. Don’t even talk to me about our kids being “political footballs”. You, the DEMOCRATS, kept them out of school for almost two years. You and your party did this. You and your party are responsible for the dip in academics, accountability, identity crisis, emotional breakdowns and fights plaguing our kids in our schools today. But YOU and your fellow Democrats don’t care. You now have the cushy position as White House Press Secretary.

It must be triggering to Karine to have to add White House Press Secretary to her signature line along with her preferred pronouns. Jen just danced around in circles and fluttered around the cocktail parties of deep, D.C. Democrat establishment with her margarita glass, throwing occasional shade at Peter Doocy. Karine has made her journalistic platform, political agenda and ideological stance public on many an occasion. She struts it like a peacock. This makes Karine Jean-Pierre more dangerous than her predecessor. There, I said it. Put me in the racist, bigot, xenophobe box. My prediction: we ain’t seen nothing yet! Stay tuned and buckle up.