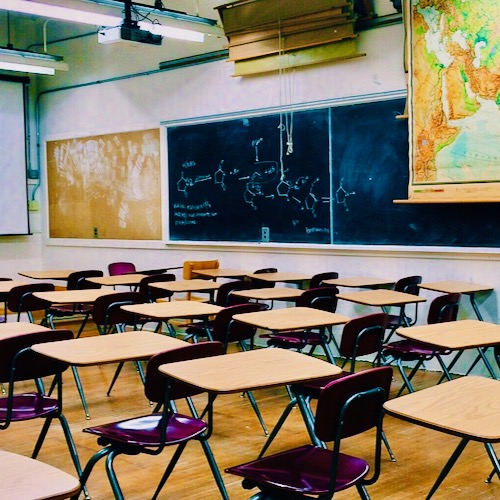 Hey, remember that time when the schools were closed and the parents were upset?

Apparently parents are not supposed to remember that time. We’re just supposed to shut up and be grateful, forget everything that we saw teachers try and push on students during online school, and not get in the way of the REAL EXPERTS. So says Florida middle school principal Sarah Hembree. Principal Hembree is apparently annoyed with the new Florida Parental Rights in Education Bill – you know, the one the media insisted was called “Don’t Say Gay” and then baited the Walt Disney Company into standing against it, which has led to some pretty unpleasant consequences for Disney in Florida.

Well, Principal Hembree is tired of parents and legislators telling the schools what to do! After all, they’re not TEACHERS, and TEACHERS KNOW WHAT’S BEST FOR YOUR KIDS. 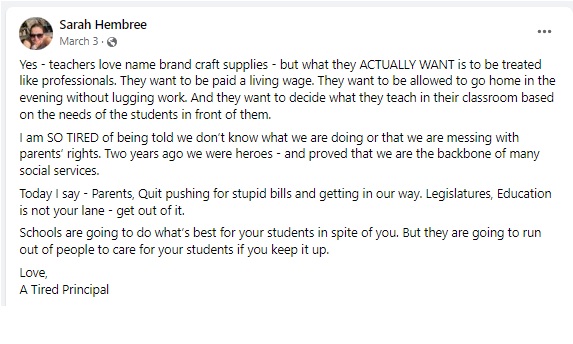 Notice that Principal Hembree, who is identified by Tallahassee Reports as the principal at Cobb Middle School in the Leon County Schools, made this Facebook post public (and was complaining about the bill before it was even passed). When it was posted, anyone could read it. The principal clearly meant for the parents at the school and in the district to read it. The teachers know best, so stay in your lane, parents!
https://twitter.com/ChristinaPushaw/status/1524848443239370752
Parents are in no mood to listen to Principal Hembree. And this isn’t even really about school closures, because Leon County Schools (like many school districts in Florida) opened up for in-person instruction in August 2020. Nope, this is about parents being exposed to what was happening in the schools and objecting to the content, and this particular principal being upset about it, echoing exactly what Nikole Hannah-Jones once said, that parents should not be “in charge” of what their kids are learning.

Let’s think about this, and what Principal Hembree said in the Facebook post. She wants teachers to be “paid a living wage.” Um, who do you think pays those wages? TAXPAYERS. Many of whom are PARENTS. So, you really want to try and tell the people who pay the bills that they get NO say in what happens in the classrooms? And who appropriates the money that gets given to the school districts to pay those wages? The LEGISLATURE. Hmmm, I’m beginning to see a massive flaw in the principal’s argument.

Speaking of that “living wage,” the Leon County Schools pay scale lists a middle school teacher’s average salary at $45,090, but the principal’s average salary at $86,060. Maybe Principal Hembree would like to explain the discrepancy? On, and their teachers’ union just negotiated a pretty substantial salary raise for themselves, complete with bonuses based on seniority. (I would prefer to see bonuses and raises based on merit.) So, Principal Hembree is wringing her hands over the teachers being underpaid, while also demanding that they operate unsupervised within the walls of their classrooms, with no parental input? Forget that.

Principal Hembree has completely forgotten that without parents, she has no students in her school to be taught. The utter lack of respect, and the principal’s public “airing of the grievances” is disgusting. Why would parents with students at this school ever decide to support it again? Schools absolutely love it when parents fundraise for them, and volunteer, and give of time and effort to do all sorts of things for the school. But according to Principal Hembree, parents are “getting in the way” when they support asserting their own rights over their own child’s education. Parents are just supposed to pay the bills and keep their mouths shut, apparently. And to then say that if parents have opinions, they might not have teachers who “care for your students” anymore? That’s just ugly.

Now that Principal Hembree’s Facebook post has gotten a wider audience, will there be any consequences for this complete public disdain for those who pay her salary? Probably not. You see, the district itself is upset with Governor DeSantis for pointing out that one of their students was part of the catalyst for the Florida Parental Rights in Education Bill.

During the School Board Meeting last week, Superintendent Hanna took a moment to address recent comments made by statewide elected officials and news outlets concerning a situation that took place in Leon County Schools. pic.twitter.com/JJxV6w2RN3

And right now, Leon County Schools is being sued by the family of that student. So, do you think that Principal Sarah Hembree is going to face any discipline for her Facebook post? NOPE. Her comments appear to be very much in line with the philosophy of the entire school district when it comes to trying to separate students from their parents.

A parting question for Principal Hembree – you say that “schools are going to do what’s best for your students in spite of you.” How many students can you name at your school? How do you know what’s best for each and every one of them? Do you even know the favorite color of each child at your school? You speak as if you are the personal defender of each student at your school. I’ll bet you can’t even remember the names of the kids who moved on to high school after last year.

You know who DOES know their names, their favorite colors, and their hopes and dreams? Their parents and guardians. Perhaps YOU, Principal Hembree, need to get back into YOUR lane and make sure these kids pass their core subjects first.