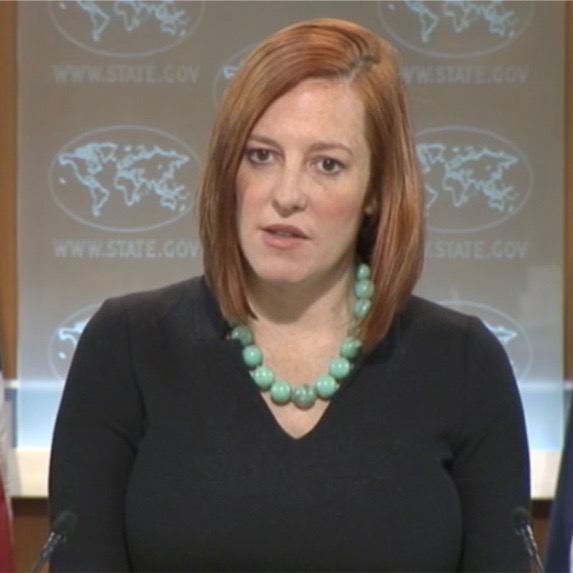 It seems as though Beltway journalists (cough) are circling around the Queen of Circle Back, Jen Psaki.

Prepare yourselves, Washingtonian has compiled a piece singing the praises of the White House Press Secretary.

The piece, entitled “The Awkward Feeling of Rooting for the White House Press Secretary” starts out with “The bar set by the Trump White House might be on the floor but, hey, so far she’s cleared it.” Yep, here we go. Thrills up the leg for all White House journos.

She takes questions from everybody. She doesn’t get rattled. She doesn’t lose her cool.”-ABC News chief Washington correspondent Jon Karl

Why would a press secretary lose his or her cool when the adoring press is being 100% respectful to them and approaching a journalistic question in a non-combative manner?

Oooooohhhh. The shivers over Jen!

The descriptive adjectives to describe Jen roll on. Jen is pleasant. Jen is lovely. Jen is calm, cool and collected. Jen is professional. Jen is firm and sunny and she’ll ask after your kids and spouse. Jen is genial. Jen is measured. Jen is a team player. Jen is smooth. Jen has a knack for making people feel warm about their interactions with her. Jen calls on everybody. So inclusive.

Washingtonian dives a bit into Jen Psaki’s humble beginnings. Psaki grew up in Greenwich, Connecticut. Of course she did. She’s steeped in the circles of the Democratic elite, working first for the Kerry campaign, then the Obama campaign, then over to the State Department as Press Secretary under the recommendations of one John Kerry.

When Psaki started at State, she convened a murder board to do some mock briefings. Mike McCurry, the only other person to have held both the State and White House press-sec jobs (under President Clinton), was part of that training. ‘I just instantly saw that she had a good manner at the podium,’ McCurry says. ‘She knew how to brush questions off. She knew how to answer questions in detail when that was required. She had a personality that exudes from the podium, which can be hard to do.'”-Jessica M. Goldstein, Washingtonian

Yep. Jen certainly knows how to brush those questions off.

(And) she’s never going to be super-helpful, and that’s frustrating, but that’s kind of her job. It’s one of those weird things where you leave the process feeling good about it even though, when you hang up the phone, you realize: F—, she said nothing helpful.”-White House Reporter, ANON

So, we’re guessing helpful isn’t part of the Jen love fest? Jen Psaki was even the darling who scored “a plum job over others” who’d actually worked on the (Biden) campaign, including Symone Sanders (now Vice President Harris’s chief spokesperson) and Karine Jean-Pierre (a deputy of Psaki’s). Nobody here is calling this out as racist, white supremacy even though the red-headed white girl scored the job instead of the two African-American women. We (won’t) circle back to this one. The love affair drones on into a climax.

Her face and voice beam out of our screens on a regular basis, and she rarely draws attention to herself. She’s the highest-visibility yet lowest-profile member of the administration. If the measure of modern cultural penetration is how much someone has been memed, all Psaki has is her oft-repeated promise to “circle back” being made into some supercuts.”-Jessica M. Goldstein, Washingtonian

Washingtonian does mention the #LadyGraham controversy, as well as the disappearance of TJ Ducklo.

Not so fast…the morning after comes soon enough after the steamy love-affair. Some cynics are not convinced. Washingtonian throws just enough skepticism in.

So what is a Biden press shop going to be like? It doesn’t yet appear to be some bastion of transparency—the President didn’t hold a full-blown press conference until two months into the job, something that became a cause on behalf of some critics. (The Washington Post devoted an editorial to criticizing it.) As spring hit and the border crisis was exacerbated by record arrivals of children, the administration repeatedly refused to allow reporters access to detention facilities, or even use the word “crisis” to describe the debacle.”-Jessica M. Goldstein, Washingtonian

In fact, some say Jen Psaki “may do more for the performance of transparency than actual transparency”. Ya think? After all, it takes a calm and measured person-a person who is pleasant and poised at the podium-to pull off what the current administration is trying to pull off here. Bringing “truth back to American government” is a difficult balancing act when you’re working for a bunch of cheats, liars and The Mentally Incompetent Commander In Chief. Judging from Jen’s background and her associations, she is well-steeped in the sludge of the swamp. Oh, the refreshing smarts and with of Jen Psaki! Rachel Maddow of MSNBC was smitten, they say! And Forbes calls Jen “must see TV“. Slay, Queen, Slay. Spin, Queen, Spin. Jen Psaki runs circles around those Obama frat-boys and those dreaded Trump people. Are we dizzy yet?