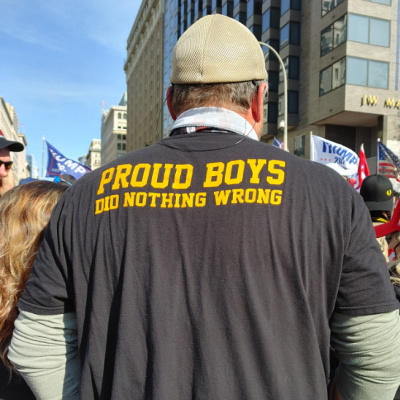 If you search for Proud Boys on the internet, you will find that violence, chauvinistic and white supremacist are terms found in the descriptions of the group. I don’t know any Proud Boys personally. They were at the Million MAGA March last November, which I attended. They mostly just stood around and smiled. Still, the media covers them as a white supremacist group, which made a little covered article all the more interesting. Asians are filling the coffers of the Proud Boys after many assaults in their community.

The legacy media and the Democrat Party (one and the same) have laid the blame for assaults in the Asian community at the door of President Donald Trump because he called the Wuhan Flu the China Virus. The media and Democrat Party believe this because White people are too derpingly stupid to know the difference between China the country and Chinese the people. Asian people come from many countries and have many ethnicities, but again, all White people are the same so we don’t see differences in others. They are all the same.

I don’t know about you, but I am bloody-freaking tired of this shite. So, I was completely gobsmacked to see more than one article about Asians donating to the Proud Boys. How is that possible? Didn’t Asians get the memo that Proud Boys are white supremacists? The Proud Boys bought into President Trump’s hateful, racist rhetoric. Didn’t they hear?

USA Today was incensed. It’s article: Model Minority trap or they “benefit from ‘white supremacy and proximity to white privilege’”.

Or, maybe some of them left oppressive regimes and know where the path of racism and dehumanizing the “other” will lead.

Or, maybe they have read the news reports. For instance, in Baltimore the other day to Korean ladies who own a liquor store where assaulted. Here is the video:

The attacker was a Black man. Just so you know, I am not letting the White man who saw the attack and carefully stepped out of the door off of the hook. Mister, you are a cowardly twatwaffle.

Here are a few more attacks by Blacks on Asians, from the tablet of Michelle Malkin:

Just recently in Vallejo, California, Filipino-American store owner Marc Quidit was shot four times in the leg by a gang of armed robbers. They were Black.

Two weeks ago, in Oakland’s Chinatown, a 91-year-old Asian man was assaulted by an assailant amidst a crime wave of more than 20 robberies and violent attacks in that neighborhood. The attacker wasn’t a White-hooded White man in a KKK robe. He was a masked Black man in a black hoodie.

In Daly City, California, an 84-year-old Thai grandfather died after a brutal attack while on a daytime walk in his neighborhood. His attacker was a teenage Black street criminal.

Well, then, why aren’t Asians giving money to Antifa? Antifa is supposed to stand for Anti-Fascist? Aren’t Asians against fascists like Donald Trump? First, they know that Donald Trump isn’t a fascist. Second, they know that while Antifa is mostly White people, Antifa indiscriminately loots and burns mostly small businesses. I don’t have any hard statistics on this, I just know what I see on the videos.

Why are Asians giving money to the Proud Boys? The New York Post provides some answers:

“You have to understand how we feel – we came from Communist China and we managed to come here and we appreciate it here so much,” Rebecca Kwan, who recently donated $500 to the group, told the paper.

Her support came specifically because the Proud Boys “are fighting Antifa,” she said. “And can you see anything good that Antifa did except destroy department stores and small businesses?”

Others expressed alarm at the extreme left-wing ideology of BLM, which co-founder Patrisse Cullors has said formed the “ideological frame” behind the “black liberation movement.”

Wait just a consarned minute, the Proud Boys are fighting Antifa? I thought they were just white supremacists. Just kidding. I don’t really know. This is from the Sun-Sentinel:

The Proud Boys were founded in 2016 by Gavin McInnes, a far-right provocateur and misogynist who also co-founded the Vice media brand. The group has billed itself as a “Western chauvinist” fraternal organization but thus far has insisted that its preference for “Western civilization” was not built on racist or anti-Semitic views.

“I denounce anti-Semitism. I denounce racism. I denounce fascism,” Tarrio has said, according to the right-wing outlet Washington Times. “I denounce communism and any other -ism that is prejudiced toward people because of their race, religion, culture, tone of skin.”

I have always thought Gavin McInnes was funny, but being a Leftist means being devoid of a sense of humor. Enrique Tarrio is the Chairman of Proud Boys and he identifies as a Cuban-American.

The net net here is that the media and Democrats have a story they want you to believe. They want to frighten you, promote white supremacy, and divide us all. Don’t buy the story. Look and listen for the parts of the story that aren’t there. What aren’t they telling you. That’s the real story.